The US space agency, NASA, said in a statement that SpaceX confirmed that the object was likely the remaining part of the jettisoned trunk segment from a Dragon spacecraft used during the Crew-1 mission's return from the International Space Station in May last year

By Mike Ives and Jenny Gross 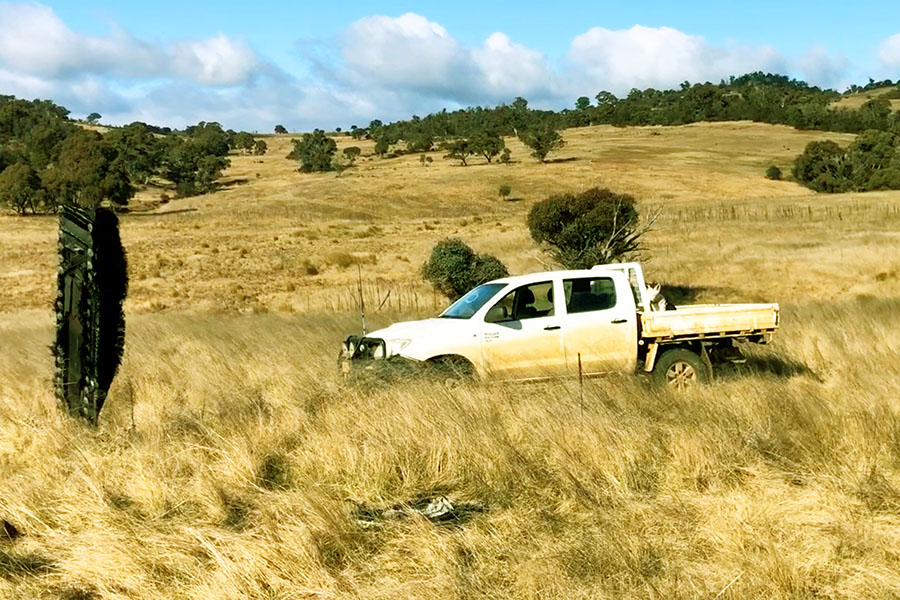 Debris from SpaceX Crew-1 is seen on a field in Dalgety, Australia July 29, 2022 in this picture obtained from social media. Image: Brad Tucker/via REUTERS

Mick Miners was herding sheep on a four-wheeler last week when he stumbled upon a pointy black object that looked more than 9 feet tall. It reminded him of either a burned tree or a piece of farm machinery.“Pretty frightening, actually,” Miners, 48, said by phone on Thursday from his roughly 5,000-acre property in a remote corner of southeastern Australia. “I was quite surprised,” he added. “It’s not something you see every day on a sheep farm.” Miners took a picture and sent it to a neighboring farmer, Jock Wallace, who happened to have discovered a similarly mysterious object on his farm a few days earlier. It was space debris.

The U.S. space agency, NASA, said in a statement that SpaceX confirmed that the object was likely the remaining part of the jettisoned trunk segment from a Dragon spacecraft used during the Crew-1 mission’s return from the International Space Station in May last year. “If you believe you have identified a piece of debris, please do not attempt to handle or retrieve the debris,” NASA said. Space debris refers to equipment in space that no longer works. Most space debris burns up while reentering the atmosphere, and much of what’s left over often falls in the ocean. However, with more spaceships entering orbit — such as those from private companies like SpaceX, founded by Elon Musk — impacts on land may happen more frequently. SpaceX did not respond to a request for comment. Jonathan McDowell, an astrophysicist at the Center for Astrophysics in Cambridge, Massachusetts, said that it’s not unusual for space debris to be found on land after an uncontrolled reentry. “It was a bit surprising to me that so much of the trunk survived the heating process of reentry,” McDowell said, but he added that there was no indication that there was anything particularly risky about the trunk. He said that in the new commercial era for space exploration, it has been much harder to get technical information from private companies to assess risk. With more information, “we could have a better assessment of, ‘Did we just get really unlucky, or should we expect this from all the trunk re-entries if they happen over land?’”Also read - Indian space startups ready for take off in 2022 The trunk segment, which is used to carry cargo and also includes the spacecraft’s solar arrays and radiators, is jettisoned from the body of the capsule shortly after the burn is completed when it goes out of orbit. “It typically burns up in the atmosphere over the open ocean, posing minimal risk to public safety,” the Federal Aviation Administration said in a statement. Last week, after debris from a large Chinese rocket reentered Earth’s atmosphere over the Indian Ocean, the administrator of NASA, Bill Nelson, issued a rebuke, saying that China “did not share specific trajectory information as their Long March 5B rocket fell back to Earth.” He added that all countries should “share this type of information in advance to allow reliable predictions of potential debris impact risk, especially for heavy-lift vehicles, like the Long March 5B, which carry a significant risk of loss of life and property.” The possibility that debris from the rocket could have struck a populated area led people around the world to track its trajectory for days. This was the third flight of Long March 5B, China’s largest rocket, which made what is called “uncontrolled reentry” back to Earth. Last year, a malfunction caused a SpaceX rocket stage to complete an uncontrolled reentry into Earth’s atmosphere near Seattle in what looked like bright objects lighting up the night’s sky. Pieces of the burning rocket debris landed on a farmer’s property in Washington state. The debris had reentered the atmosphere after 22 days in orbit. The rural area of Australia where Miners discovered the space debris on July 25 lies about 100 miles south of the capital, Canberra. Ron Lane, who owns a restaurant in the town of Dalgety, said that most people in the area — with the notable exception of himself — were not especially worried about additional space debris potentially landing on them or their homes. “If there’s three we know about, there could be another 10 we don’t know about,” Lane said by phone from his restaurant, Tuscany In Dalgety. Miners, who was born on the farm where he discovered the unidentified debris, said that his neighbor, Wallace, had called the authorities to report the other debris that he had found on his own property earlier in July. Public interest grew, Miners said, after Wallace called the Australian national broadcaster, which later reported on the farmers’ discoveries and said that three pieces of debris had been found.Also read - What is this 'missing matter' of the Universe that has been found? “Then everybody found out, and I’ve had about 300 calls,” said Miners, who has about 5,500 sheep, 100 cattle and 30 horses on his farm in the district of Numbla Vale.His own piece of debris is almost 10 feet tall by 1.3 feet, he said, and an official from the Australian Space Agency called on Thursday to say that its experts planned to visit his property next week to “have a look at it.” Miners said he had so far enjoyed learning the preliminary details about how the debris had landed and that he was not sure what would happen next. He said he would be “happy to keep it” but was also interested in “a bit of compensation,” if the space agencies or company wanted it back. Sa’id Mosteshar, a professor of international space law and the director of the London Institute of Space Policy and Law, said that a person would be able to claim compensation only if the debris harmed him or her or caused any damage to his or her property. “My guess is they’ll want it back,” Miners added. “I don’t know. I don’t know anything about it. As I said, I’m a sheep farmer.”