Luxury storefronts have been replaced by pop-up shops selling masks. Whole floors of skyscrapers are deserted. Streets once crammed with locals and visitors jostling for space are quiet 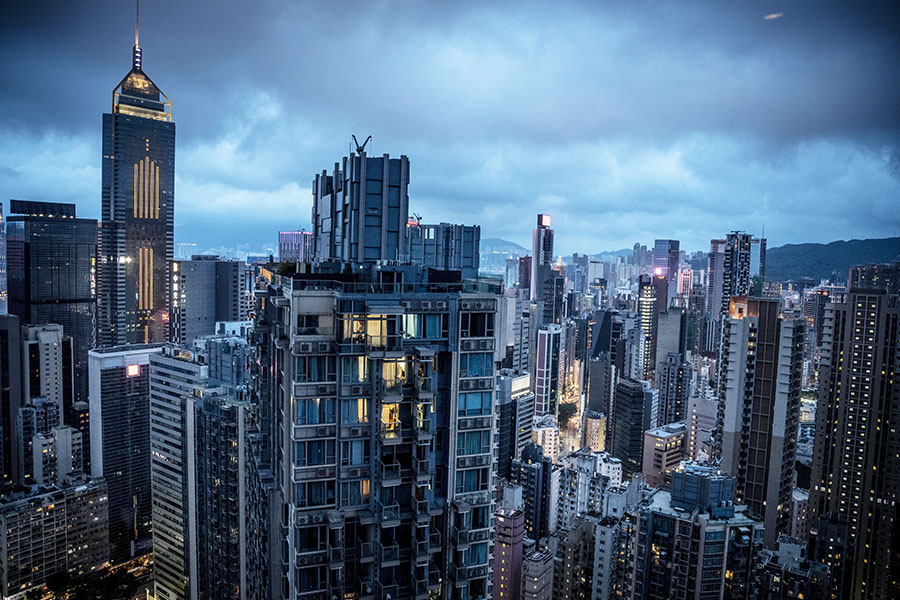 A view of buildings in Hong Kong, June 12, 2022. Officials are saying the city will bounce back, but even before 2020, Chinese control was changing Hong Kong’s character and driving people away. (Sergey Ponomarev/The New York Times)

HONG KONG — Luxury storefronts have been replaced by pop-up shops selling masks. Whole floors of skyscrapers are deserted. Streets once crammed with locals and visitors jostling for space are quiet.

This is “Asia’s World City,” Hong Kong’s self-appointed title, after more than two years under some of the world’s toughest pandemic rules. The city now wants to reclaim that cosmopolitan status by taking its biggest step toward living with COVID-19: scrapping a crushing quarantine mandate that at one point required 21 days in a designated hotel and easing restrictions on the global gatherings that gave it its reputation as an international metropolis.

But uncertainty lingers over the new approach, which still prohibits visitors from going to places considered high risk — like restaurants, bars and gyms — during their first three days in the city, and many industry leaders say the changes are not enough to pull Hong Kong out of an economic recession and restore its once-clamorous social life.

There are deeper worries, too. The fact that Hong Kong began to diverge from China’s “zero COVID” policy only after Beijing gave its blessing has touched off worries over the city’s broader loss of autonomy. Before the pandemic, the former British colony was already changing in irreversible ways after months of citywide pro-democracy protests. Beijing then unleashed a devastating crackdown that shut down or pushed out some of the people and things that made Hong Kong unique to the rest of China: a politically boisterous, irreverent, semi-autonomous city.

“For Hong Kong’s international credibility, it is shot to pieces,” said David Webb, a longtime corporate governance activist in Hong Kong. As the city scrambled to get a grip on a COVID outbreak earlier this year, its leaders fumbled. They lurched back and forth between insisting on ever-more-restrictive policies that mirrored China’s own draconian approach and backing off, panicking residents and triggering an exodus, predominantly of foreigners.

“What happens the next time there is a health threat?” Webb asked. “They have done permanent damage to our reputation as having autonomy in matters like this.”

Under John Lee, a former police officer who became the city’s chief executive in July, Hong Kong has loosened restrictions more quickly than at any point in the pandemic. He has assured residents that the city will continue to move in that direction while emphasizing the need to also protect people from future outbreaks.

Other politicians have struck a similar tone.

“We have not lost the title; you could say it’s a bit tarnished,” said Tommy Cheung, a legislative councilor representing the catering industry and an adviser to Lee. “We have more people leaving than coming, but that happens all over the world. That doesn’t mean we are no longer a global city.”

Despite the positive spin, the damage of the past few years has been devastating. After decades in Hong Kong, many multinational companies have pulled their headquarters and staff out, moving to less restrictive places such as Singapore and Seoul, South Korea. International teachers, foreign athletes and many of Hong Kong’s own professional elite have left. For many, the move is permanent, but for some, COVID was only the latest worry.

“In some ways, Hong Kong is just another big city in China now,” said Meredith Haskins, a former teacher at Hong Kong International School who retired in June. Teachers have left amid continuing school disruptions and fears about possible mass testing and family separations in government quarantine. A long stretch of a mandatory 21-day hotel quarantine for many arrivals and several rounds of social distancing measures have weighed on families.

But the city’s changing political atmosphere has cast a shadow, too. Curriculum guidelines issued by the government last year emphasize loyalty to mainland China, its leaders and its coercive methods, and many worry that it is only a matter of time before the new national security law negatively affects curricula at international schools. Schools have had difficulty filling positions.

Strict COVID rules have also made it hard for foreign businesses to persuade employees not to leave Hong Kong. Companies have complained that even with the loosened rules, travel barriers remain for new hires from abroad and those who want to visit for a conference.

Whether Hong Kong can return to being an attractive city for foreign businesses “would mean a massive effort to rebuild Hong Kong’s global image,” said Frederik Gollob, the chair of the European Chamber of Commerce in Hong Kong.

The exodus has been harmful to the economy and Hong Kong’s labor force, which has shrunk to a decade low. The city’s financial secretary warned this month that Hong Kong was likely to finish the year in a recession.

Media companies, including The New York Times, and nongovernmental organizations began moving staff to other Asian cities such as Seoul and Tokyo in 2020, over uncertainty that followed Beijing’s imposition of the sweeping new national security law.

Much of Hong Kong’s once-vibrant civil society is unlikely to return. Some industries that depend on the city’s open border are cautiously optimistic but unsure whether the easing of COVID restrictions goes far enough.

An early test will be the Hong Kong Sevens rugby tournament, one of the city’s best-known sports events, which will take place in November for the first time since the start of the pandemic.

Presale tickets are down 30% from 2019 as international corporate sponsors express uncertainty about the event, said Robbie McRobbie, CEO of the Hong Kong Rugby Union. Overseas spectators will not be able to attend until they have passed three days of health monitoring.

“Whether or not we will be able to put up the sold-out signs, I’m not sure at this stage,” McRobbie said. There is also confusion over whether the 350 athletes, coaches, referees and medical-support teams will have to remain in a closed loop for the first three days, restricted to their hotel and the stadium.

The main beneficiaries of quarantine changes so far have been tour operators. “It’s a very positive direction,” said Moon Yau, the assistant general manager at Sunflower Travel Services, which does tours to Japan, Europe and mainland China. Since Friday, when officials announced the change in rules, he had received more than 300 inquiries a day about trips, he said. He added that for now, they had been mostly residents taking their first overseas holiday in nearly three years.

For others, the impact is more mixed. The first weekend after the announced changes, revenues fell at Black Sheep Restaurants’ nearly 40 restaurants across the city, said Syed Asim Hussain, a co-founder, as residents rushed to leave the city on long-planned overseas trips. The new rules are not enough to bring people to Hong Kong, he said, and he plans to write a complaint to the government.

He said he also wonders whether Hong Kong has changed irrevocably after months of protests, the silencing of dissent that followed and more than two years of isolation.

“My industry demands that I be optimistic, but I haven’t found many reasons for optimism for three years,” Hussain said. “It’s been so difficult. In some ways — even though safety is in sight — it is more frustrating.

“I definitely feel,” he added, “that we have been through something really heavy collectively as a community.”

Tweets by @forbesindia
Dating apps thrive in China, not just for romance
Go Colors: How the Saraogis are painting the town red with its bottomwear