Record temperatures in Britain last week would have been "highly unlikely" without the influence of human-caused climate change, a new report by the Imperial College London has found 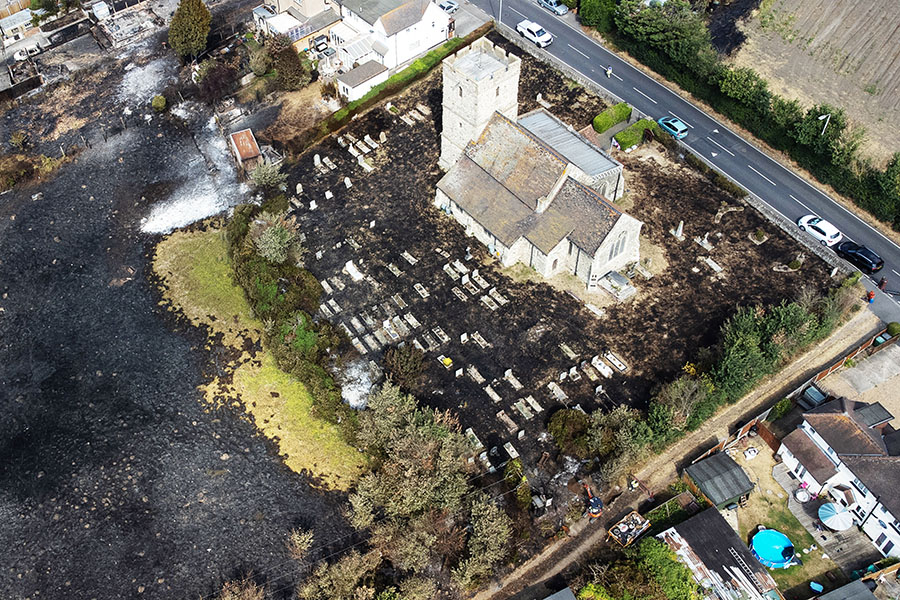 WENNINGTON, GREATER LONDON - JULY 20: An aerial view shows the scorched graveyard around a church following a large blaze the previous day, on July 20, 2022 in Wennington, Greater London. A series of fires broke out across England yesterday as the UK experienced a record-breaking heatwave. Temperatures in many places reached 40c and over. Image: Leon Neal/Getty Images

The heat that demolished records in Britain last week, bringing temperatures as high as 104.5 degrees Fahrenheit to a country unaccustomed to scorching summers, would have been “extremely unlikely” without the influence of human-caused climate change, a new scientific report issued Thursday has found.
Heat of last week’s intensity is still highly unusual for Britain, even at current levels of global warming, said Mariam Zachariah, a research associate at Imperial College London and lead author of the new report. The chances of seeing the daytime highs that some parts of the country recorded last week were 1-in-1,000 in any given year, she and her colleagues found.
Still, Zachariah said, those temperatures were at least 10 times as likely as they would have been in a world without greenhouse-gas emissions, and at least 3.6 degrees Fahrenheit hotter.

“It’s still a rare event today,” said Friederike Otto, a climate scientist at Imperial College London and another author of the report. “It would have been an extremely unlikely event without climate change.”
Severe heat has become more frequent and intense across most regions of the world, and scientists have little doubt that global warming is a key driver. As the burning of fossil fuels causes average global temperatures to rise, the range of possible temperatures shifts upward, too.
Before last week, the highest temperature Britain had ever recorded was 101.7 Fahrenheit (38.7 Celsius), a milestone set in Cambridge in July 2019. This month, as temperatures climbed, the nation’s weather authority, the Met Office, warned Britons to brace for new highs.
The mercury blew past the record on the morning of July 19 in the village of Charlwood, Surrey, and kept rising. By day’s end, 46 weather stations, spanning most of the length of England, from London in the southeast to North Yorkshire in the northeast, had logged temperatures that met or exceeded the previous national record. More than 840 more people may have died in England and Wales than would have been typical, according to a preliminary analysis.
The report on last week’s heat was produced by World Weather Attribution, an alliance of climate scientists. The group’s analysis of the heat in Britain has not yet been peer reviewed or published in an academic journal, but it relies on peer-reviewed methods.

Tweets by @forbesindia
US economy shows another decline, fanning recession fears
Not all fun and games: Day(s) in the life of digital content creators