News of the back-to-back contractions heightened a debate in Washington over weather a recession had begun and, if so, whether President Joe Biden was to blame 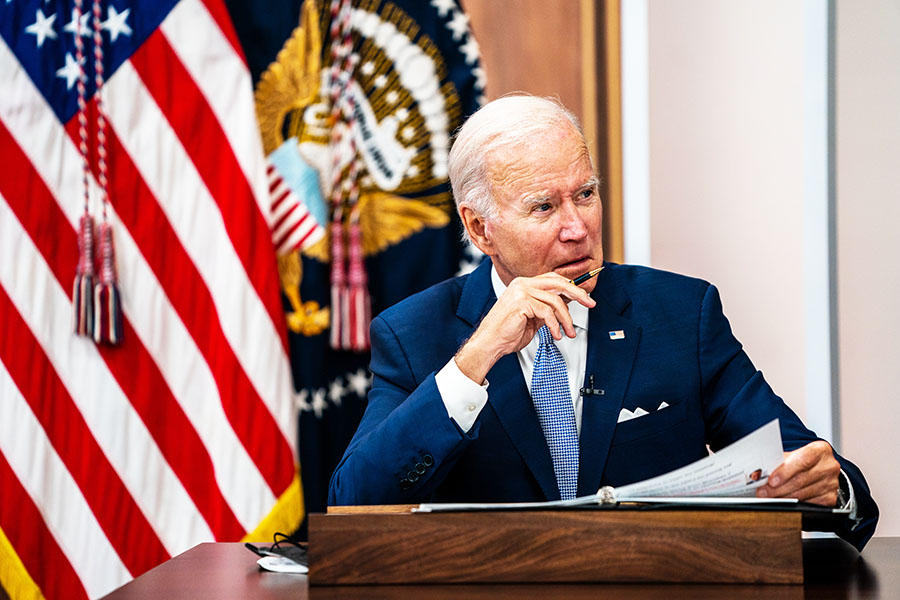 WASHINGTON, DC July 28, 2022: US President Joe Biden during a meeting with CEOs to receive an update on economic conditions across key sectors and industries in the South Court Auditorium of the Executive Office Building on July 28, 2022. Image: Demetrius Freeman/The Washington Post via Getty Images

A key measure of economic output fell for the second straight quarter, raising fears that the United States could be entering a recession — or perhaps that one had already begun.
Gross domestic product, adjusted for inflation, fell 0.2% in the second quarter, the Commerce Department said Thursday. That drop followed a decline of 0.4% in the first quarter. The estimates for both periods will be revised in coming months as government statisticians get more complete data.
News of the back-to-back contractions heightened a debate in Washington over whether a recession had begun and, if so, whether President Joe Biden was to blame. Economists largely say that conditions do not meet the formal definition of a recession but that the risks of one are rising.
For most people, though, a “recession” label matters less than the economic reality: Growth is slowing, businesses are pulling back and families are having a harder time keeping up with rapidly rising prices.
“We’re absolutely losing momentum,” said Tim Quinlan, a senior economist for Wells Fargo. “Income gains at minimum have struggled to keep pace with inflation, and that’s what is chipping away at people’s ability to spend.”

A deceleration, on its own, isn’t necessarily bad news. The Federal Reserve has been trying to cool the economy in a bid to tame inflation, and the White House has argued that the slowdown is part of an inevitable and necessary transition to sustainable growth after last year’s rapid recovery.
“Coming off of last year’s historic economic growth — and regaining all the private-sector jobs lost during the pandemic crisis — it’s no surprise that the economy is slowing down as the Federal Reserve acts to bring down inflation,” Biden said in a statement issued after the release of the GDP report. “But even as we face historic global challenges, we are on the right path, and we will come through this transition stronger and more secure.”
Still, forecasters in recent weeks have become increasingly concerned that the Fed’s aggressive moves — including raising interest rates three-quarters of a percentage point Wednesday for the second month in a row — will result in a recession. Fed Chair Jerome Powell acknowledged that the path to avoiding a downturn was “narrowing,” in part because of global forces, including the war in Ukraine and strict pandemic policies in China, that are beyond the central bank’s control.
“When you’re skating on thin ice, you wonder about what it would take to push you through, and we’re on thin ice right now,” said Diane Swonk, chief economist for KPMG.
Matthew Martin, 32, is paying more for the butter and eggs that go into the intricately decorated sugar cookies he sells as part of a home business. At the same time, his sales are falling.
“I guess people don’t have as much money to toss at cookies right now,” he said.
Martin, a single father of two, is trying to cut back on spending, but it isn’t easy. He has replaced trips to the movies with day hikes, but that means spending more on gas. He is hoping to sell his house and move into a less expensive place, but finding a house he can afford to buy has proved difficult, especially as mortgage rates have risen. He has thought about finding a conventional 9-to-5 job to pay the bills, but he would then need to pay for child care for his 4-year-old twins.
“Honestly, I’m not 100% sure what I’m going to do,” he said.
Economists often use two quarters of falling GDP as a shorthand definition of a recession. In some countries, that is the formal definition. But in the United States, declaring a recession falls to a private, nonprofit research organization, the National Bureau of Economic Research. The group defines a recession as “a significant decline in economic activity that is spread across the economy and lasts more than a few months,” and it bases its decisions on a variety of indicators — usually only months after the fact.
Some forecasters believe a recession can be avoided, if inflation cools enough that the Fed can slow interest rate increases before they take too much of a toll on hiring and spending.
The economy still has important areas of strength. Job growth has remained robust, and, despite a recent uptick in filings for unemployment insurance, there is little sign of a broad increase in job losses. Households, in the aggregate, are sitting on trillions of dollars in savings built up earlier in the pandemic, which could allow them to weather higher prices and interest rates.
“What drives the U.S. consumer is the healthy labor market, and we should really focus on job growth to capture the turning point in this business cycle,” said Blerina Uruci, an economist at T. Rowe Price. The Labor Department will release data on July’s hiring and unemployment next week.
The lingering effects of the pandemic are making the economy’s signals harder to interpret. Americans bought fewer cars, couches and other goods in the second quarter, but forecasters had long expected spending on goods to fall as consumers shifted back toward pre-pandemic spending patterns. Indeed, economists argue that a pullback in spending on goods is needed to relieve pressure on overstretched supply chains.
At the same time, spending on services accelerated. That could be a sign of consumers’ resilience in the face of soaring airfares and rental car rates. Or it could merely reflect a temporary willingness to put up with high prices, which will fade along with the summer sun.
“There is going to be this element of, ‘We haven’t had a summer vacation in three years, so we’re just going to take one, no matter how much it costs,’” said Aditya Bhave, a senior economist for Bank of America. “The question is what happens after the summer.”