In just a decade, CRISPR has become one of the most celebrated inventions in modern biology, swiftly changing how medical researchers study diseases: Cancer biologists are using the method to discover hidden vulnerabilities of tumor cells; doctors are using it to edit genes that cause hereditary diseases. But CRISPR's influence extends far beyond medicine 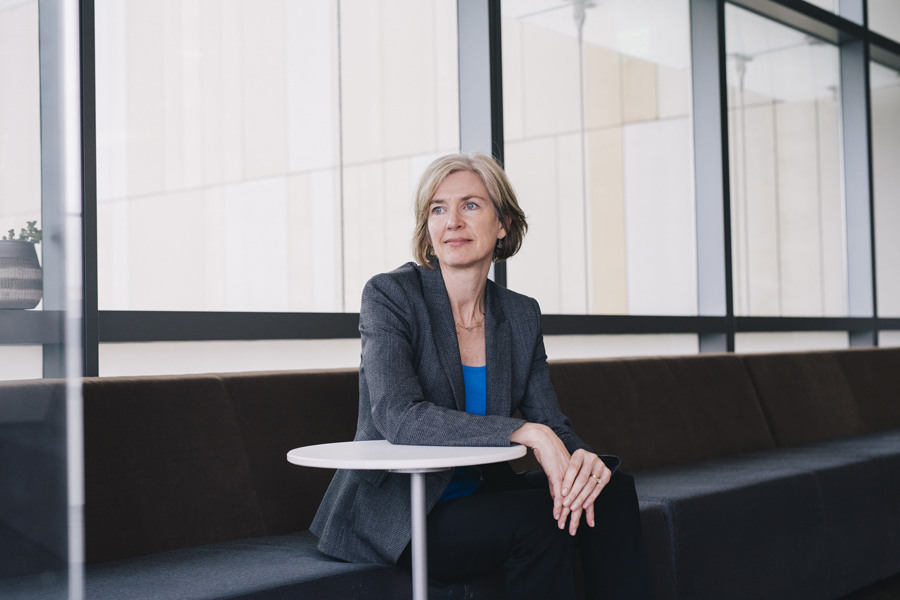 Jennifer Doudna, who shared the 2020 Nobel Prize for chemistry for her work on CRISPR, at the University of California in Berkeley, Jan. 15, 2019. The gene-editing technology has led to innovations in medicine, evolution and agriculture — and raised profound ethical questions about altering human DNA. (Anastasiia Sapon/The New York Times)

Ten years ago this week, Jennifer Doudna and her colleagues published the results of a test-tube experiment on bacterial genes. When the study came out in the journal Science on June 28, 2012, it did not make headline news. In fact, over the next few weeks, it did not make any news at all.

Looking back, Doudna wondered if the oversight had something to do with the wonky title she and her colleagues had chosen for the study: “A Programmable Dual RNA-Guided DNA Endonuclease in Adaptive Bacterial Immunity.”

“I suppose if I were writing the paper today, I would have chosen a different title,” Doudna, a biochemist at the University of California, Berkeley, said in an interview.

Far from an esoteric finding, the discovery pointed to a new method for editing DNA, one that might even make it possible to change human genes.

“I remember thinking very clearly, when we publish this paper, it’s like firing the starting gun at a race,” she said.

In just a decade, CRISPR has become one of the most celebrated inventions in modern biology. It is swiftly changing how medical researchers study diseases: Cancer biologists are using the method to discover hidden vulnerabilities of tumor cells. Doctors are using CRISPR to edit genes that cause hereditary diseases.

But CRISPR’s influence extends far beyond medicine. Evolutionary biologists are using the technology to study Neanderthal brains and to investigate how our ape ancestors lost their tails. Plant biologists have edited seeds to produce crops with new vitamins or with the ability to withstand diseases. Some of them may reach supermarket shelves in the next few years.

Also read: Inside the world of DNA decoding in India

CRISPR has had such a quick impact that Doudna and her collaborator, Emmanuelle Charpentier of the Max Planck Unit for the Science of Pathogens in Berlin, won the 2020 Nobel Prize for chemistry. The award committee hailed their 2012 study as “an epoch-making experiment.”

Doudna recognized early on that CRISPR would pose a number of thorny ethical questions, and after a decade of its development, those questions are more urgent than ever.

Will the coming wave of CRISPR-altered crops feed the world and help poor farmers, or only enrich agribusiness giants that invest in the technology? Will CRISPR-based medicine improve health for vulnerable people across the world, or come with a million-dollar price tag?

The most profound ethical question about CRISPR is how future generations might use the technology to alter human embryos. This notion was simply a thought experiment until 2018, when He Jiankui, a biophysicist in China, edited a gene in human embryos to confer resistance to HIV. Three of the modified embryos were implanted in women in the Chinese city of Shenzen.

In 2019, a court sentenced He to prison for “illegal medical practices.” MIT Technology Review reported in April that he had recently been released. Little is known about the health of the three children, who are now toddlers.

Scientists don’t know of anyone else who has followed He’s example — yet. But as CRISPR continues to improve, editing human embryos may eventually become a safe and effective treatment for a variety of diseases.

Will it then become acceptable, or even routine, to repair disease-causing genes in an embryo in the lab? What if parents wanted to insert traits that they found more desirable — such as those related to height, eye color or intelligence?

Françoise Baylis, a bioethicist at Dalhousie University in Nova Scotia, worries that the public is still not ready to grapple with such questions.

“I’m skeptical about the depth of understanding about what’s at issue there,” she said. “There’s a difference between making people better and making better people.”

Doudna and Charpentier did not invent their gene-editing method from scratch. They borrowed their molecular tools from bacteria.

The bacteria turned these sequences into genetic material, called RNA, that could stick precisely to a short stretch of an invading virus’s genes. These RNA molecules carry proteins with them that act like molecular scissors, slicing the viral genes and halting the infection.

As Doudna and Charpentier investigated CRISPR, they realized that the system might allow them to cut a sequence of DNA of their own choosing. All they needed to do was make a matching piece of RNA.

To test this revolutionary idea, they created a batch of identical pieces of DNA. They then crafted another batch of RNA molecules, programming all of them to home in on the same spot on the DNA. Finally, they mixed the DNA, the RNA and molecular scissors together in test tubes. They discovered that many of the DNA molecules had been cut at precisely the right spot.

For months, Doudna oversaw a series of round-the-clock experiments to see if CRISPR might work not only in a test tube but in living cells. She pushed her team hard, suspecting that many other scientists were also on the chase. That hunch soon proved correct.

In January 2013, five teams of scientists published studies in which they successfully used CRISPR in living animal or human cells. Doudna did not win that race; the first two published papers came from two labs in Cambridge, Massachusetts — one at the Broad Institute of the Massachusetts Institute of Technology and Harvard, and the other at Harvard.

Also read: Can these startups fix rural healthcare in India?

‘Did you CRISPR that?’

Dow and his colleagues soon found that the method reliably snipped out pieces of DNA in human cancer cells.

Cancer biologists began systematically altering every gene in cancer cells to see which ones mattered to the disease. Researchers at KSQ Therapeutics, also in Cambridge, used CRISPR to discover a gene that is essential for the growth of certain tumors, for example, and last year, they began a clinical trial of a drug that blocks the gene.

Caribou Biosciences, co-founded by Doudna, and CRISPR Therapeutics, co-founded by Charpentier, are both running clinical trials for CRISPR treatments that fight cancer in another way: by editing immune cells to more aggressively attack tumors.

Those companies and several others are also using CRISPR to try to reverse hereditary diseases.

Other companies are injecting CRISPR molecules directly into the body. Intellia Therapeutics, based in Cambridge and also co-founded by Doudna, has teamed up with Regeneron, based in Westchester County, New York, to begin a clinical trial to treat transthyretin amyloidosis, a rare disease in which a damaged liver protein becomes lethal as it builds up in the blood.

Doctors injected CRISPR molecules into the volunteers’ livers to shut down the defective gene. Speaking at a scientific conference last Friday, Intellia researchers reported that a single dose of the treatment produced a significant drop in the protein level in volunteers’ blood for as long as a year thus far.

The same technology that allows medical researchers to tinker with human cells is letting agricultural scientists alter crop genes. When the first wave of CRISPR studies came out, Catherine Feuillet, an expert on wheat, who was then at the French National Institute for Agricultural Research, immediately saw its potential for her own work. 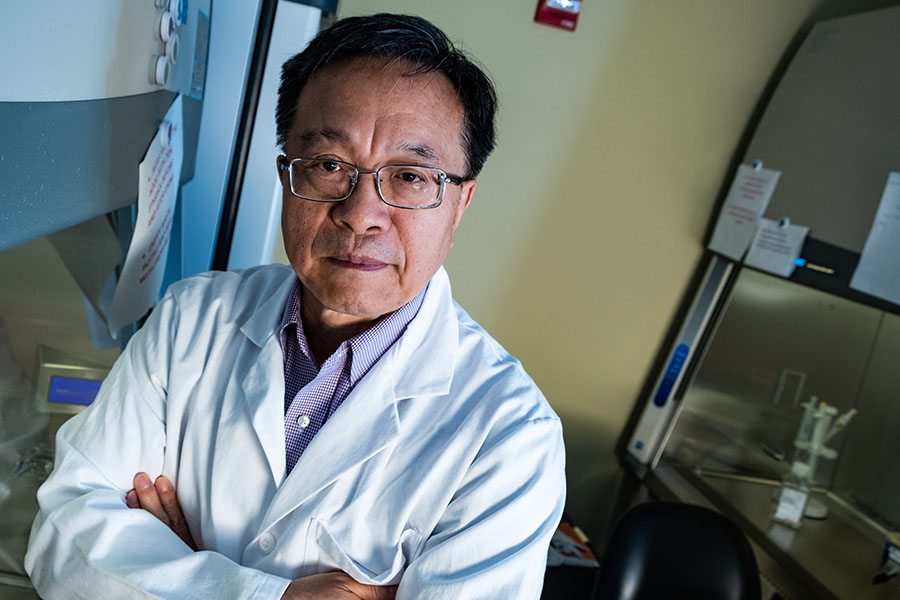 The original CRISPR system, known as CRISPR-Cas9, leaves plenty of room for improvement. The molecules are good at snipping out DNA, but they’re not as good at inserting new pieces in their place. Sometimes CRISPR-Cas9 misses its target, cutting DNA in the wrong place. And even when the molecules do their jobs correctly, cells can make mistakes as they repair the loose ends of DNA left behind.

A number of scientists have invented new versions of CRISPR that overcome some of these shortcomings. At Harvard, for example, Liu and his colleagues have used CRISPR to make a nick in one of DNA’s two strands, rather than breaking them entirely. This process, known as base editing, lets them precisely change a single genetic letter of DNA with much less risk of genetic damage.

Liu has co-founded a company called Beam Therapeutics to create base-editing drugs. Later this year, the company will test its first drug on people with sickle cell anemia.

Liu and his colleagues have also attached CRISPR molecules to a protein that viruses use to insert their genes into their host’s DNA. This new method, called prime editing, could enable CRISPR to alter longer stretches of genetic material.

“Prime editors are kind of like DNA word processors,” Liu said. “They actually perform a search and replace function on DNA.”

Rodolphe Barrangou, a CRISPR expert at North Carolina State University and a founder of Intellia Therapeutics, predicted that prime editing would eventually become a part of the standard CRISPR toolbox. But for now, he said, the technique was still too complex to become widely used. “It’s not quite ready for prime time, pun intended,” he said.