How demand for twigs is bringing down a rainforest

The logging industry in Congo uproots precious old-growth trees for use in furniture and home construction, then, entire swaths of forest are burned to make way for farming. But the raiding of the forest by regular people in search of cooking materials is surprisingly destructive as well 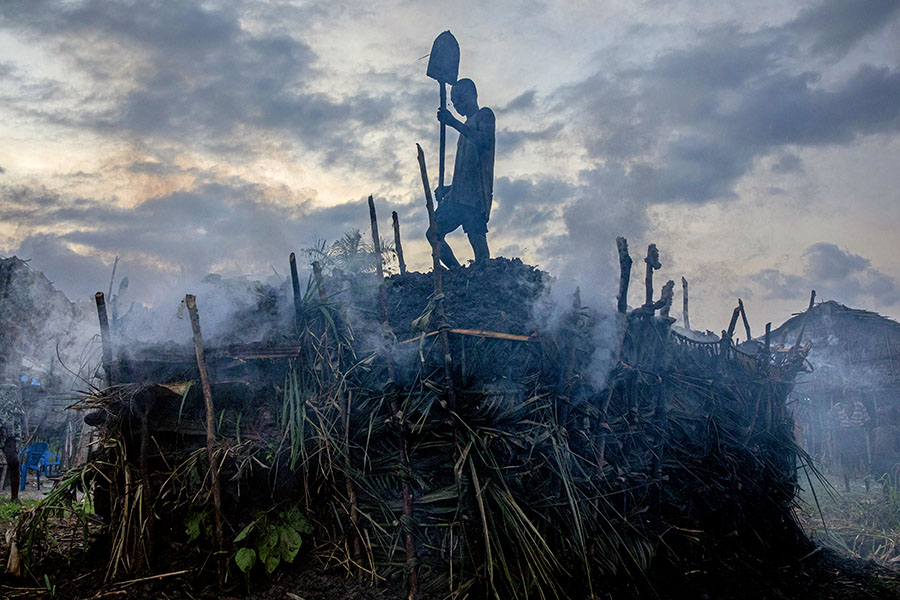 A kiln for making charcoal, widely used for cooking, along a Congo River tributary in Mbandaka, Democratic Republic of Congo, on March 16, 2022. In the Congo River Basin, a rainforest that rivals the Amazon in importance, people who collect bundles of wood to make charcoal play a surprisingly large role in deforestation. (Ashley Gilbertson/The New York Times)

Every day late in the afternoon, women lugging bags of sticks on their back spill out of the brush onto a highway just south of the equator. Men pass on motorbikes, one after another, hauling bags of charcoal. Boys trudge along with a single log slung over their shoulders, as if they are toting a baguette.

Deep in the trees, Debay Ipalensenda puts down his ax and joins this forest parade, which is slowly destroying one of the world’s most important landscapes, all to cook a meal.

The scene plays out not only on this stretch of road in Congo but all across the 1.3 million square miles of rainforest across the Congo Basin, home of the second-largest old-growth rainforest in the world.

It is a ritual that in its ubiquity is a tragedy. And not just for generations of people who have no means to prepare food other than to cook it over open fires, but also for the entire planet as the carbon-absorbing forests so critical for slowing global warming are taken apart tree by tree and in some cases branch by branch.

The logging industry in Congo uproots precious old-growth trees for use in furniture and home construction, contributing to the destruction of forests — particularly when not regulated properly. On top of that, entire swaths of forest are burned to make way for farming.

But the raiding of the forest by regular people in search of cooking materials is surprisingly destructive as well. That is partly because felling and burning trees unleashes stores of carbon dioxide into the atmosphere, where it acts as a blanket, trapping the sun’s heat and warming the world. But in addition to that, cooking with wood fires and charcoal — wood that is burned until it is reduced to almost pure carbon, which burns longer and hotter — affects air quality from particles emitted in the smoke. 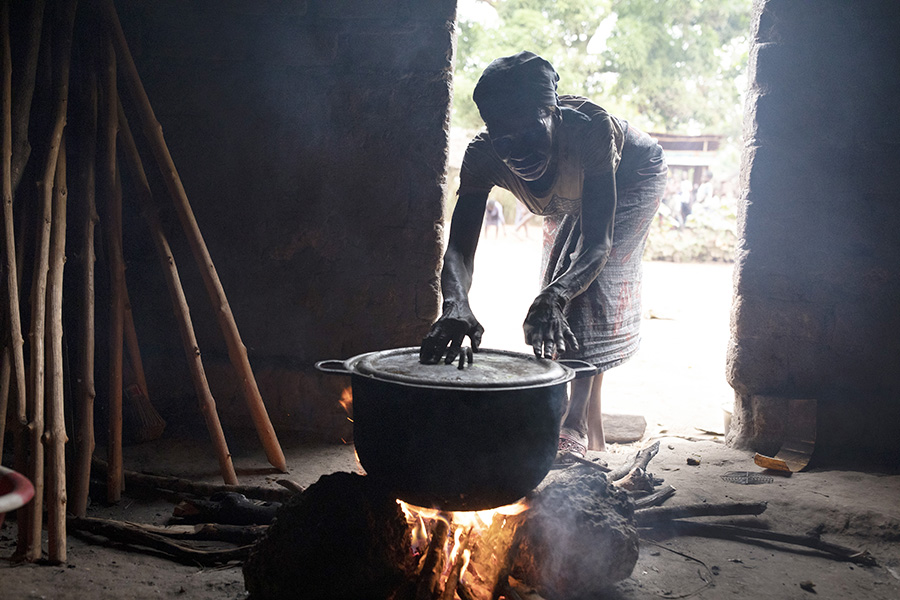 Eyenga Ekwabe, 60, cooks cassava bread in a small town south of Mbandaka, Democratic Republic of Congo, on March 17, 2022. In the Congo River Basin, a rainforest that rivals the Amazon in importance, people who collect bundles of wood to make charcoal play a surprisingly large role in deforestation. (Ashley Gilbertson/The New York Times)

Nearly 90% of Congo’s 89.5 million people rely on firewood and charcoal for cooking, according to World Bank estimates. Congo lost more than 1.2 million acres of primary forest in 2021, mostly from residents clearing land for farming and for collecting wood for fires and charcoal, according to Global Forest Watch.

Ipalensenda is part of the booming trade that is supplying a growing population. As he chopped at a tree trunk, the thud of his homemade ax echoed across the forest. He does not want to be working there, in the trees, where he slings the ax for hours on end. He once had bigger plans.

“My dream? Well,” he sighed and paused, leaning on his ax as a yellow butterfly flitted past his face. “My dream was to be a doctor.”

Ipalensenda, 33, graduated from high school and planned to attend university. Then his father fell ill and died. Suddenly, it was up to him to financially support the family.

The job was one of the few available to him in the smattering of tiny communities of mud-brick houses that line the edge of the forest here. Everyone, after all, needs a way to cook meals.

Most of the forest depletion in Congo is a matter of survival. Despite its vast treescape, fierce rivers and abundance of gems, minerals and metals, the country is one of the world’s poorest. It is also one of the world’s least electrified. 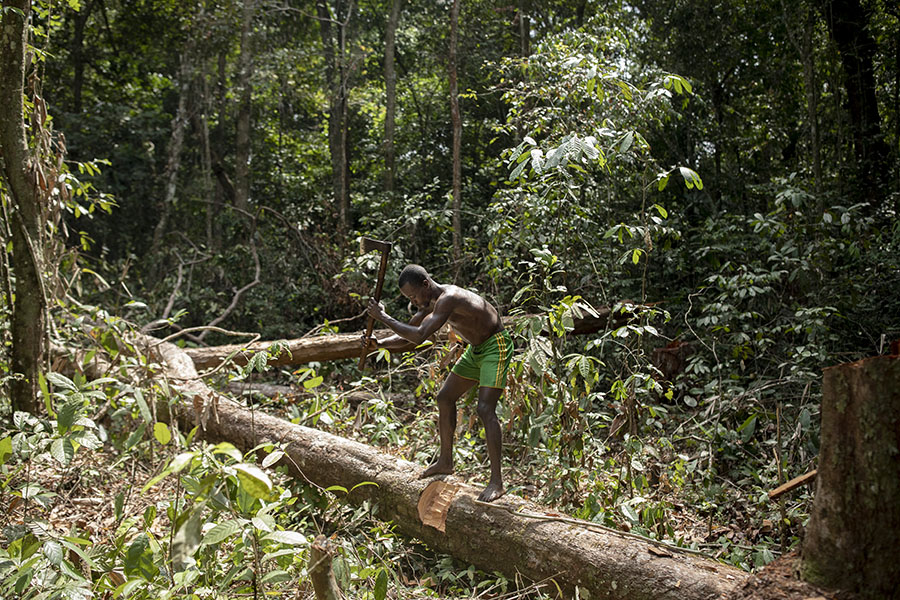 Debay Ipalensenda, 33, a charcoal maker, in the forest near Mbandaka, Democratic Republic of Congo, on March 17, 2022. “What can you do when you see the only way to feed your family is to cut trees?” said Ipalensenda, who walks two hours into the forest every day to collect wood. (Ashley Gilbertson/The New York Times)

The power grid barely exists in this nation of glaring inequalities. That is true even hundreds of miles away from Ipalensenda, in the capital, Kinshasa, where the flashy hotels and nightclubs gloss over the reality: A relative few people even there, in one of Africa’s biggest cities, use gas-fired or electric stoves.

“I have electricity, and it changed my life,” said Israel Monga, one of the lucky ones, as he stood on a street on a steamy afternoon. But Monga has connections: He is an electrician who works for Société Nationale d’Électricité, the national electric company.

The story is different for almost everyone else.

Less than 17% of the nation has access to electricity, according to the World Bank, and those with electricity are accustomed to problems. Small flames regularly burst from the scant few electric wires strung over Kinshasa, and blackouts are common. Earlier this year, more than two dozen people were killed when a power line snapped and fell onto a crowded market.

Bakeries where baguettes and a doughy cassava bread called fufu are made typically rely on charcoal or wood for cooking. So do the stalls that sell the popular dish, chicken mayo, with its saucy blend of onions and peppers. And so do countless people indoors, in their kitchens at home.

Most of Kinshasa’s residents rely on branches and briquettes that are carted into the city by the truckload every day, the product of countless charcoal makers and wood gatherers raiding trees in rural areas outside the city. 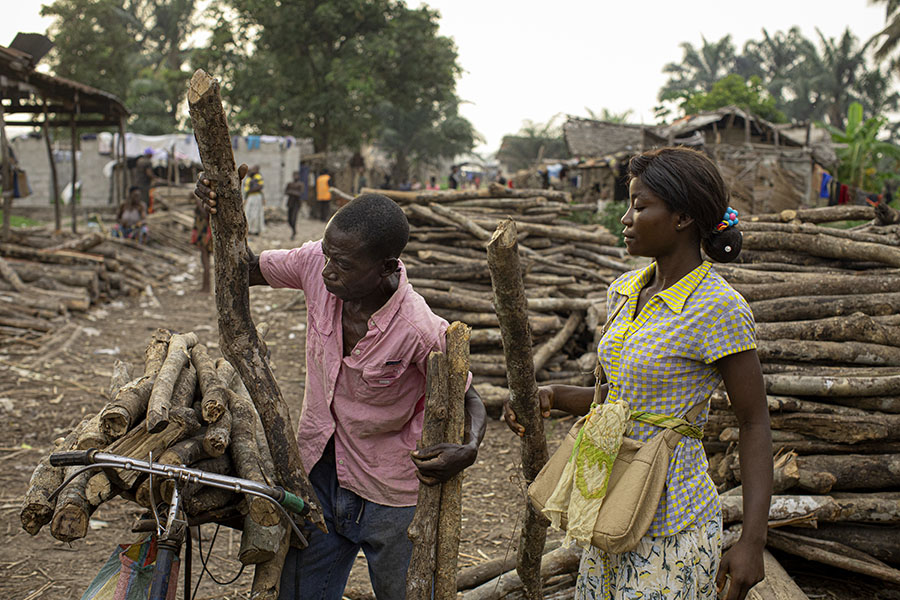 A firewood market in Mbandaka, Democratic Republic of Congo, on March 15, 2022. In the Congo River Basin, a rainforest that rivals the Amazon in importance, people who collect bundles of wood to make charcoal play a surprisingly large role in deforestation. (Ashley Gilbertson/The New York Times)

Congo has huge potential for clean energy. Some researchers think the Congo River, which winds through the country, could be harnessed to power the entire continent. The nation’s government for decades has been trying to get more hydropower facilities online.

However, a plan to create more dams, which could bring capacity to double that of Three Gorges Dam in China, has stalled, in part because the project has been mired in disputes between international companies bidding for the work. The current hydropower system is dilapidated and mismanaged.

In the meantime, politicians, academics, activists, global financial institutions and businesspeople have tried to come up with solutions for how to wean families from charcoal. A few projects provide clean energy to a patchwork of communities across the country. Some are designed to train residents to build the kilns where charcoal is made with less wood, or to make eco-friendly charcoal from organic waste.

But none of that has reached Ipalensenda. He heads into the forest daily, snaking for hours, barefoot, between trees in swampy land. Half of the trip takes him through thigh-high water in a patchy forest where clusters of trees have already been chopped.

“We’ve been taught that by cutting the forest, it will make oxygen disappear,” he said. “It makes me worried, of course, but what can you do when you see the only way to feed your family is to cut trees? There is no other choice.”