Macron's majority in doubt after first-round of parliament vote

Macron's "Ensemble" (Together) alliance ran neck-and-neck with the left-wing NUPES grouping in Sunday's first round, with the former netting 25.75 percent of the popular vote compared to the latter's 25.66 percent 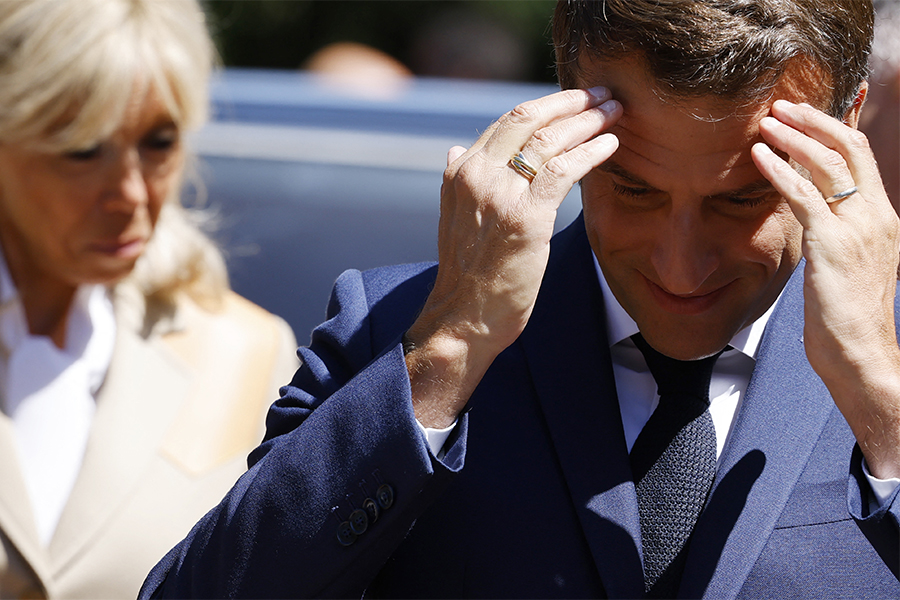 Paris, France: French President Emmanuel Macron's centrist alliance was in danger of falling short of a majority after the first round of parliamentary elections on Sunday saw a surge in support for a new left-wing coalition.
Macron's "Ensemble" (Together) alliance ran neck-and-neck with the left-wing NUPES grouping in Sunday's first round, with the former netting 25.75 percent of the popular vote compared to the latter's 25.66 percent.
Extrapolating from these figures, four polling firms projected that Ensemble would win 225-295 seats in the decisive second round of voting next Sunday, possibly short of a majority of 289 but comfortably the biggest group.
"We have a week ahead of us to mobilise," Prime Minister Elizabeth Borne told reporters.
"One week to convince, one week to obtain a powerful and clear majority."
Ensemble was "the only political grouping capable of getting a majority", she said.
NUPES, a newly unified alliance of leftists, Socialists, Greens and Communists, was projected to win 150-220 seats, a major breakthrough that would make them the biggest opposition force in the National Assembly.

"It's a very serious warning that has been sent to Emmanuel Macron," political scientist Brice Teinturier told France 2 television, noting how support for the president's party had fallen since the last election in 2017.
"A majority is far from certain," he added.
If Macron's coalition does fall short, it is expected to be forced into messy bill-by-bill deals with right-wing parties in parliament, or he will have to try to poach opposition or independent MPs to his side.
Under France's constitution, the president has exclusive control over foreign and defence policy, but needs a majority in parliament to pass domestic legislation.

Sunday's vote followed presidential elections in April in which Macron secured a second term, beating far-right leader Marine Le Pen with pledges to cut taxes, reform welfare and raise the retirement age.
Putting behind their divisions, the French left has united behind Jean-Luc Melenchon, a hard-left veteran with a radically different programme, including lowering the retirement age, hiking the minimum wage by 15 percent and creating wealth taxes.
"The NUPES has passed the first test it faced in magnificent fashion," Melenchon told reporters in a statement afterwards, calling on supporters to "pour out" next Sunday.
He called for the support in particular from the working classes and young people, adding that Macron's allies were "beaten and defeated".
Turnout hit a record low, with 52.49 percent of registered voters opting to stay home, and abstentionism particularly high in working-class areas.
Le Pen looked certain to be re-elected as an MP representing a former mining town of northern France, Henin-Beaumont, with her National Rally party appearing on course to increase their representation.
After winning 18.68 percent of the popular vote on Sunday, it was on track to secure 5-45 seats in the new parliament next weekend, compared with eight currently.
More than 15 MPs would give the far-right a formal group in parliament, meaning it would have more time to speak and put issues on the agenda as well as extra resources.
Defeated far-right presidential candidate Eric Zemmour was eliminated on Sunday after standing in a constituency around Saint-Tropez in southern France.

While Macron and his European Union allies were relieved by Macron's victory against Le Pen in April, the last weeks have offered no honeymoon for the 44-year-old head of state.
Energy and food prices are soaring, while disorder and the tear-gassing of English fans at the Champions League final in Paris on May 28 have led to recriminations.
His new Disabilities Minister Damien Abad has also faced two rape accusations—which he has vehemently denied—while new Prime Minister Borne has yet to make an impact.
Macron is set to make a public appearance at an arms fair in Paris on Monday morning, kicking off what promises to be an intense week of campaigning from all sides.
He and allies have sought to portray Melenchon as an old-style tax-and-spend leftist whose anti-EU and anti-NATO policies pose a danger to the country.
Melenchon accuses Macron of planning to undermine France's cherished public services and is promising strong environmental policies and "harmony with nature".
Jerome Jaffre, a political scientist, said many voters appeared to be motivated by a desire to deprive Macron of an absolute majority.
"It means that they're hoping to force him to work more with others, share power and really change his method (of governing) which he promised during his presidential campaign," he told the LCI channel.
By Adam PLOWRIGHT and Joseph SCHMID
© Agence France-Presse