A preliminary report released Wednesday by China's aviation safety regulator failed to dispel much of the mystery about why a China Eastern jet suddenly went into a nosedive in clear weather last month and crashed into a muddy hillside, killing all 132 people aboard 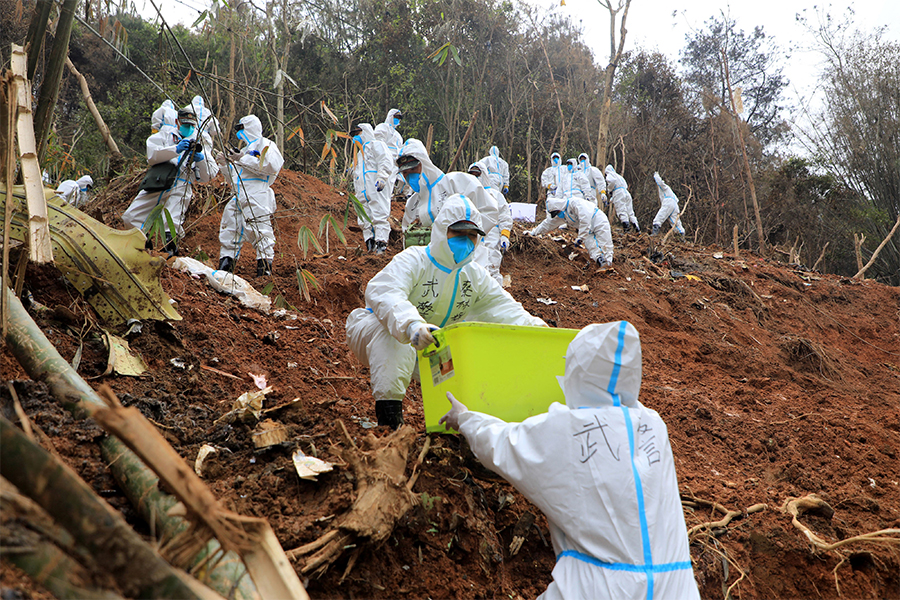 This photo taken on March 26, 2022 shows paramilitary police officers transferring fragments of wreckage of the China Eastern passenger jet which crashed onto a mountainside in Tengxian county, Wuzhou city, in China's southern Guangxi region. The Boeing 737-800 was flying between the cities of Kunming and Guangzhou on March 21 when it nosedived into a mountainside, disintegrating on impact and killing all 132 people on board.

BEIJING — The pilots had met China’s standards for flying a commercial jet. No problems were found with the aircraft before it took off. No dangerous cargo had been loaded aboard. Communications with the plane appeared normal until its deadly plunge.

A preliminary report released Wednesday by China’s aviation safety regulator failed to dispel much of the mystery about why a China Eastern jet suddenly went into a nosedive in clear weather last month and crashed into a muddy hillside, killing all 132 people aboard. The report mainly cataloged what was previously known about the crash.

“The investigation found that the flight and cabin crew onboard, as well as the maintenance and clearance personnel, met qualification requirements,” the report said. “Before it deviated from cruising altitude, there was nothing abnormal in wireless communications between the crew and air control or in the control commands.”

The report also suggested that obtaining more evidence from the plane’s two flight recorders could take some time.

“The two recorders on the plane were severely damaged in the crash,” it said, “and data recovery and analysis is proceeding.”

As a signatory to the Convention on International Civil Aviation, China’s regulator was under an obligation to produce a preliminary report Wednesday, 30 days after the crash. But a summary statement issued by the regulator, the Civil Aviation Administration of China, did not put forward any theories to address why the plane, a Boeing 737-800, suddenly turned almost vertical while cruising at 29,000 feet and maintained that position except for a brief surge upward about two-thirds of the way down to the ground.

Commercial jets are designed to be naturally stable from front to back while in flight. They do not fly almost straight down at very high speed unless extreme force is continuously applied to the horizontal stabilizers on either side of the tail, aviation experts said in the days after the plane crashed.

A mechanical failure or software error can cause the horizontal stabilizers to malfunction, or a pilot can deliberately force the plane to fly almost straight down. The report did not address these possibilities. But it did mention that key components of the tail had been found at the crater left by the plane in a bamboo-swathed hillside.

The aircraft’s engines were also found there.

This month, Wu Shijie, a safety official from Civil Aviation Administration of China, cautioned against a plethora of theories about the crash that have spread online within China. Some of these theories have suggested pilot suicide as a cause of the crash. Chinese aviation authorities have stepped up checks on the health and mental well-being of commercial aircraft pilots in recent days.

But Wu said these measures for pilots should not be taken as a sign that the cause of the crash had been identified.

“We still cannot come to a conclusion on the cause and nature” of the crash, he told reporters, according to an official Chinese aviation news website.

China has tried to show openness and comply with international standards for air crash investigations. It has sent both black boxes to the National Transportation Safety Board in Washington for analysis.

The NTSB has also sent a team to the crash site in southern China to help with the investigation. China allowed the team to enter the country without going through the usual three weeks or more of quarantine, allowing the visiting investigators to follow instead the “travel bubble” requirements used during the Beijing Winter Olympics. Those standards call for daily PCR testing for COVID-19 and severely restrict contact with Chinese citizens. The NTSB said Wednesday that its team had returned to the United States on April 14.