A look at how four female pilots shattered the glass ceiling by steering the maiden Air India San Francisco-Bengaluru flight over the treacherous skies of the North Pole, including going over technicalities again and again, preparing for unpredictable climatic conditions in case of an emergency, and more 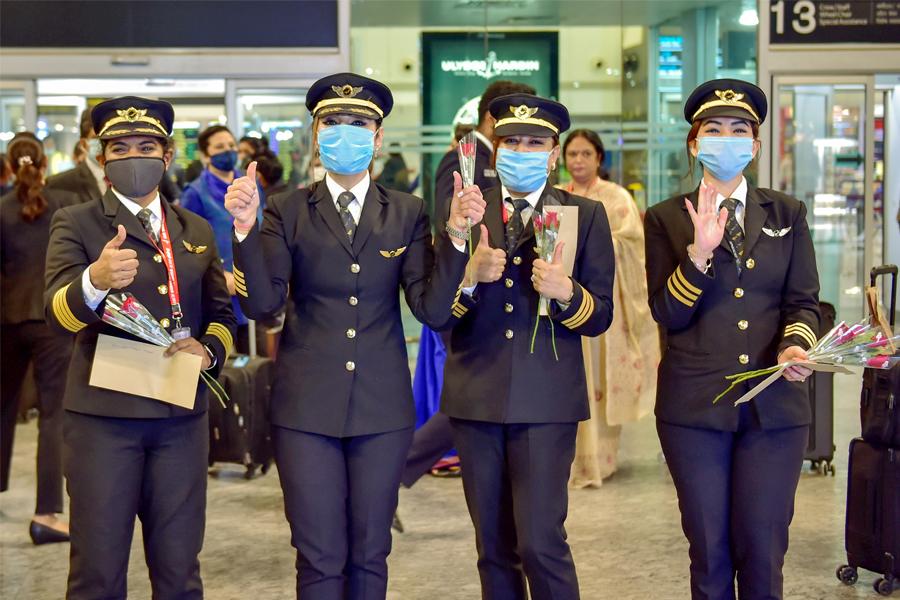 For three days leading up to her flight from San Francisco to Bengaluru on January 9, Captain Zoya Agarwal didn’t step out of her room. “It’s really a first for me. I’m not a person who usually does that,” says Agarwal, a pilot with Air India, India’s flagship carrier. Cooped up, Agarwal pored over the flight plan over and over again: What to do if the fuel temperature went really low, what were the appropriate airports to divert to in case of an emergency, how to communicate in a radio blackout zone, what have you.

Agarwal has been flying international sectors for Air India for 17 years, crisscrossing the globe every week. She landed from Milan the day before speaking to Forbes India, and was scheduled to take off for Chicago in the next few days. But the flight from San Francisco was unlike any other she had flown till now—it was Air India’s inaugural non-stop, connecting the American Silicon Valley with Bengaluru, its Indian counterpart. The route covering 16,000-odd km (and a flight time of 17 hours and 25 minutes) was the longest for an Indian airline, and the sixth-longest in the world, says Statista, a data platform.

But the significance of the flight transcended mere aviation statistics—it was the country’s first flight to traverse via the North Pole, a geography of unpredictable and treacherous climatic conditions. And what elevated its historicity by a few notches was an all-woman crew at the cockpit: Commanders Agarwal and Thanmai Papagari, along with first officers Shivani Manhas and Akansha Sonawane.

A woman pilot is an oddity of sorts in the aviation industry. According to Statista, India, with 12.4 percent, has the highest share of female pilots in the world, way ahead of countries like the US and the UK, with 5.4 percent and 4.7 percent, respectively. But, despite its high share, India’s paltry numbers, effectively at a little over one in 10, are symptomatic of the male-dominated industry. For an all-woman crew to be entrusted with such a momentous flight is perhaps reflective of a moving needle, a progression from the times when Agarwal’s mum started crying at her daughter’s career choice, or Papagari’s family struggled to procure an academic loan for her.

Fittingly perhaps then that AI 176, which started at 8.30 pm on January 9 carrying almost 250 passengers, landed at Bengaluru’s Kempegowda Airport in the early hours of January 11, the day pioneering American aviator Amelia Earhart took off from Honolulu on a solo flight to California in 1935. 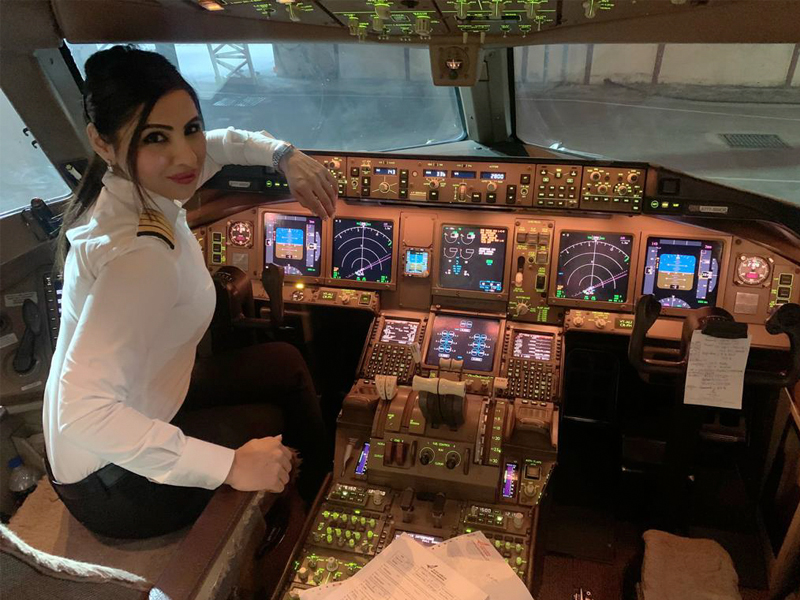 In 2004, Zoya Agarwal battled more than 2,000 candidates to be one among seven to bag a pilot’s job with Air India

“The polar flight is something we’ve been trying to work out for some time. It saves fuel and time. For this flight, for instance, we saved 10,000 kg of fuel, reducing our carbon footprint, and 1 hour and 5 minutes over our regular route,” says Agarwal. In 2019, Air India ran a proving flight on this route to assess feasibility. Last year, to celebrate Women’s Day on March 8, an all-woman crew was scheduled to operate a Delhi-San Francisco flight over the North Pole. “But this flight requires a lot of things to come together, especially the weather. Those didn’t work out on that day,” she adds.

San Francisco and Bengaluru are antipodal cities located diagonally opposite to each other on the globe. While a flight over the North Pole connecting the two cities is way more economic and eco-friendly, it’s fraught with challenges, foremost among them being the bone-chilling weather and the thick ice-sheets that wrap its landmass. Besides, flying in the polar zone involves a greater exposure to solar radiation, hence frequent journeys through the route might be hazardous.

“On a regular route, the outside temperatures for a flight could go up to -30°C. Around the polar region, during the winter months, a temperature of -68°C is common; it can potentially freeze the fuel. I can’t fly for over 90 minutes in a region that has a temperature of -65°C,” says Agarwal, the pilot-in-command for the journey. “Besides, in case of an unintended solar activity, we would need to divert. A polar flight is a tricky flight.”

As a flight enters the polar zone above 78°N latitude, the Earth converges into lesser landmass and fewer appropriate airports for a wide-bodied Boeing 777 to land in case of an emergency. Ahead of the flight, the four women—two sets of crew being routine for ultra long-haul flights such as these—studied the route with a hawk’s eye and identified a few such, one being at Norway’s Svalbard, the northernmost airport in the world. “But if they had a snowstorm that day, it wouldn’t be available. Then we’d have to plan another suitable airport within our range,” says Papagari, who was the pilot-in-command for the preceding Delhi-San Francisco leg of the journey. 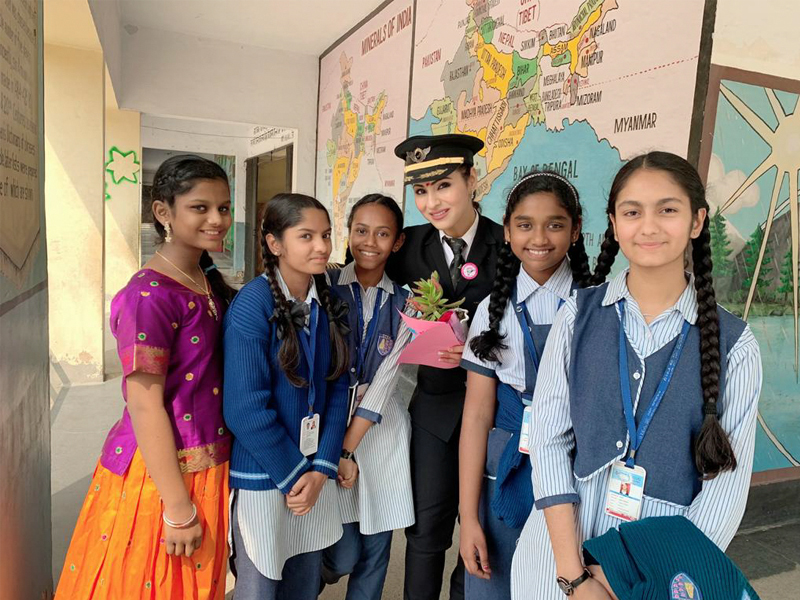 Since her landmark flight, Agarwal has met and spoken to a number young girls to inspire them to fly higher

Should the plane land in an emergency, a polar flight also needs to carry on board two polar suits, weighing 32 pounds each, to help engineering and fuel checks navigating 1,000 ft of snow. Besides, the poles are a zone of satellite communication blackout and the cockpit can only connect through high-frequency radio. “Before we took off, we checked and double-checked. Safety was paramount,” adds Papagari.

Despite such frenzied preparations, one isn’t sure about the routing till about four hours prior to departure, when the weather charts and route conditions are laid on the pilot’s table. “Two days before the flight, we had a full day of classes and extra padhai (lessons) where we had to read the polar manuals,” says Manhas, the first officer who joined Air India in 2016.

A day prior, the pilots met the 15-member cabin crew for a briefing; among the things discussed was an intensive screening of passengers to identify those not physically fit enough to undertake such a long flight. “But despite all the preparations, we were trying not to get our hopes high, since we couldn’t be sure about the weather conditions till the day of the flight,” adds Manhas.

On January 9, the weather gods smiled on Agarwal. “On that day, the temperature in the polar region was -33°C at 37,000 feet. Ask me when I’m in my grave and I’ll still get the numbers right,” she laughs. While that meant a green signal for take-off, weather patterns could turn topsy-turvy in a matter of minutes between San Francisco and the Anchorage airspace, through which Agarwal had planned to enter the polar zone. “We get about three to three and a half hours after take-off to assess the final conditions. Till then, there is always a possibility that I’d need to change route,” she adds.

Once in the polar zone, which lasts about four hours and ends over the Murmansk airspace in Russia, the plane has to be navigated through an area of magnetic unreliability that makes compasses go bonkers. It’s for the same reason that flights don’t pass over the exact geographic North Pole at 90°N, but about a degree away from it, at Devid, the northernmost flight point on the globe. While Agarwal was at the controls as the plane flew over the North Pole, all four members gathered at the cockpit to share the most historic moment of the journey. And, of course, take in the view. “The polar skies were the darkest, but the starriest I’ve ever seen,” says Agarwal, who’s had a passion for stargazing since she was eight, when she told her parents to skip a few birthday parties and save up for a telescope.

Once the flight landed in Bengaluru, the pilots were received with thunderous applause from the cabin and incessant camera flashes. “We ran out of feedback forms and had to supply tissue papers to the fliers to write down their messages. In my 17-year flying career, I haven’t seen so many cameras pointed at me. But the most important thing for me is what it has done for women’s empowerment,” says Agarwal.

Since her return, Agarwal has been inundated with interviews and talk requests, a far cry from the rocky years of her youth when she became the only girl to join flying classes in Delhi, straddling those with her graduation course from St Stephen’s College; in 2004, three years after she finished training, she battled more than 2,000 candidates to be one among seven to bag a job with Air India. Or when Papagari, who joined Air India in the batch next to Aggarwal’s, faced strong disapproval for her career choice, despite support from her parents. Back then, ‘kaun isse shadi karega [who will marry her?]’ would be a perennial refrain for women pilots, given their erratic schedule and work hours.

“It is a male-dominated profession, but having said that a pilot’s seat doesn’t know whether I’m a man or a woman. I’ve never faced challenges from my peers or instructors,” says Agarwal, who has clocked close to 11,000 flying hours. “Is flying long-haul difficult for women? It’s a test of endurance for sure, since an 18-hour flight time means a 24-hour day for me from start to finish. But if you really want it, don’t play the woman card. I’ve never played it.”

Papagari, too, speaks of a welcome change. “So many women now want to become pilots. I get inquiries from my neighbours who want their kids to become pilots. But most important, after the polar flight, I get to tell my daughter and her friends that I know where Santa Claus lives.”

Tweets by @forbesindia
Photo of the Day: Gloriously victorious
Depth of pain from royal life spills into view