Army Monuments Officers work in a military capacity to identify and preserve cultural treasures around the world that are threatened by conflict, just like the Monuments Men of World War II who recovered millions of artifacts looted by the Nazis 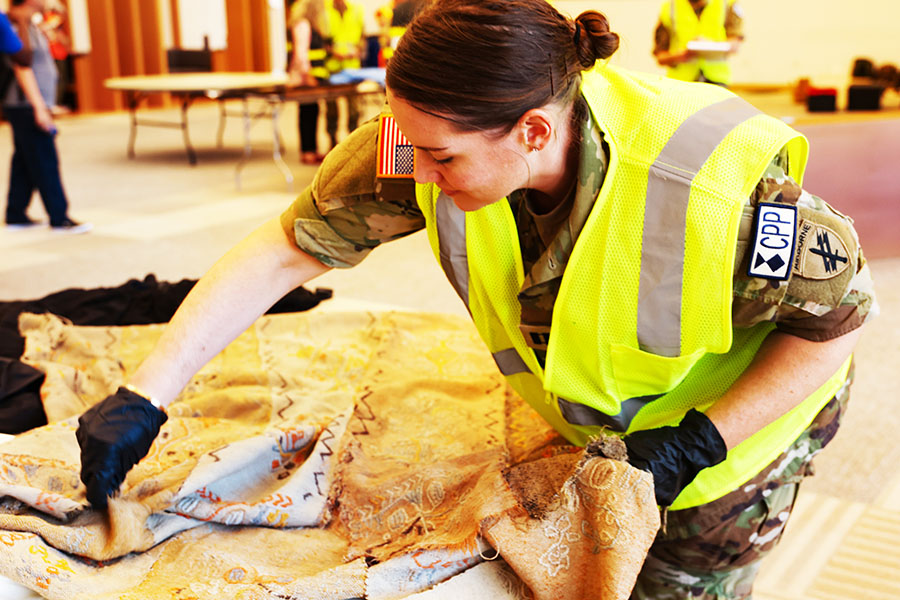 FORT BELVOIR, Va. —The Army Reserve officers worked with brisk efficiency.For much of the afternoon, they had meticulously documented and carefully packed cultural treasures from the Smithsonia museum in Pinelandia — a country that could soon be under siege. Their mission — to evacuate important items from the museum — was going well.But then an aloof, lunch-preoccupied security guard accidentally put his foot through a precious painting propped against a table.

The room went silent. Then the museum’s collection manager had a conniption. The officers had a problem.

“A failure of our forces to secure the artifacts while we were handling them,” Capt. Blake Ruehrwein, 40, of Rehoboth, Massachusetts, said afterward.

Thankfully for the officers, it was all only a training exercise set in a fictional museum and country. The mishap, which appeared at least somewhat intentional, would help them learn to deal with crisis and keep their heads on a swivel, instructors later said.

In reality, the trainees are 21 cultural professionals with special expertise in everything from African history to spatial computing. A handful are international cultural property protection officers here for the training and networking. The other 15 are part of a cadre of academics and arts curators who are being turned into Army Monuments Officers.

Their charge? Working in a military capacity to identify and preserve cultural treasures around the world that are threatened by conflict, just like the Monuments Men of World War II who recovered millions of artifacts looted by the Nazis.

The Smithsonia they were protecting was actually a wing of the National Museum of the United States Army. The cultural treasures to preserve were items bought from thrift stores and garage sales.

“Make no mistake,” said Corine Wegener, director of the Smithsonian Cultural Rescue Initiative, a partner in the 10-day training program. “These are all soldiers.”

At a graduation ceremony Friday, after a yearslong bureaucratic delay, the class members are expected to cap off their formal appointment as part of the first new class of modern-day monuments men and women in a generation.

The ceremony comes after intensive training that includes courses in first-aid and forensic documentation, emergency preparedness, and the nuts and bolts of war-zone conservation — how to dry out, handle and salvage damaged items.

“I’m both exhausted and energized,” said Capt. Jessica Wagner, 34, of St. Louis, Michigan, who specializes, not coincidentally, in heritage preservation and repatriation of cultural property.Also read: How India can save its urban heritage

On Wednesday, in the Smithsonia, with the pressure on and the clock ticking, officers developed a detailed cataloging system to log the items. One officer carefully placed foam inside a ceramic item to cushion it, then wrapped it in tissue paper and capped it. Lacking additional paper, he used a box cutter to shape a piece of cardboard that he could wrap around the object.

Across the room, an anxious collection manager shouted at another officer trying to secure a painting: “We can't put tape on this!”

Once they are in the field, the officers will not be directly hunting down missing works of art but will instead serve as a set of scholarly liaisons for military commanders and the local authorities. They may advise against an airstrike on a certain site, for instance, or suggest an attempt to forestall looting in an area where ground fighting has begun.

“The capability that these new Monument Men and Women are bringing is a better understanding of the environment so commanders can apply resources in the right directions,” said Col. Scott DeJesse, an Army Reserve officer who is one of the leaders of the effort. “If you want to build stronger partnerships, this is how you do it. Through trust, through showing we care about you.”

The specialists are to be part of the Army Civil Affairs and Psychological Operations Command, which has its headquarters at Fort Bragg, North Carolina. As reservists, they will not be deployed full time but will be attached to military units as needed. That could entail working in war zones where team members could come under fire. Hence the training.

“The risks of putting myself in harm’s way to safeguard cultural heritage are worth it,” said Ruehrwein, an Air Force veteran who works in education and outreach at the Naval War College Museum in Newport, Rhode Island. “I believe so strongly in the importance and value of the arts for everyone.”

The efforts recall those of the Monuments Men — 345 people (mostly men but also several dozen women) who applied their art expertise overseas from 1943-51. Together, they tracked down millions of artworks, books and other valuables stolen by the Germans in wartime. Their stories were recorded and relayed in the work of Robert M. Edsel and eventually formed the basis for a 2014 George Clooney movie, “The Monuments Men.”

In 2019, the Smithsonian Institution and the Army Civil Affairs and Psychological Operations Command agreed to join forces to protect cultural property in conflict zones and develop a training program for Army Reserve Civil Affairs Soldiers.

Training was supposed to begin in 2020, but the pandemic played a part in a hiring delay and bureaucracy slowed the process. During World War II, the Monuments Men were soldiers who had already enlisted and happened to have the needed specialized skills. In this iteration of the program, the military, for the first time, directly commissioned civilian cultural heritage specialists into its ranks.

Another new class of specialists could soon follow this one, Wegener said.

It has been almost 20 years since Wegener worked as an arts, monuments and archives officer in Baghdad as part of a very small team. She knew the military needed more highly trained experts in civil affairs. And thankfully, she said, officials agreed.

“This, to me, is my dream come true,” she said. “You don’t have to wait for something bad to happen. You now have this network that we created — and that they’re creating for themselves getting to know each other and training together. We’re helping provide this capability in the world.”

Six of the 21 people in the current class of Army Monuments Officers, including Ruehrwein and Wagner, are new directly appointed officers. Nine other participants were already in the Army Reserve when they enrolled in the training and have either transferred to command or are in the process; the final six are international cultural property protection officers within their national militaries.Also read: How Berlin remembers its troubled past

Wagner has worked in education and public outreach for the several cultural institutions, including most recently the U.S. Naval War College Museum. Years ago, in graduate school, she said she spent time researching those in the Monuments, Fine Arts and Archives Unit from World War II for her dissertation.

“Would I be willing to do that?” she recalled asking herself.In an email this week, after a day of training, she acknowledged that being in uniform still “feels a little out-of-body for me.” Building military habits such as saluting, using courtesy titles and taking off hats indoors has sometimes felt foreign. And Wagner and her peers will also eventually need to pass one of the Army’s physical diagnostic tests.

But in this group, Wagner said, she has found her “people.”“If you would have asked me five years ago if I would ever be in the U.S. Army, wearing a uniform, sitting in the Smithsonian Castle, surrounded by military soldiers from around the world, discussing how to best protect cultural heritage in conflict, I wouldn’t have believed it,” she said. “But here we are.”

Tweets by @forbesindia
Photo of the day: For a good season
The Reserve Bank of Australia to explore use cases for CBDC