Junkies frequent hundreds of sales points dotted around Colombia's second city, which has become the epicenter of the domestic drug trade 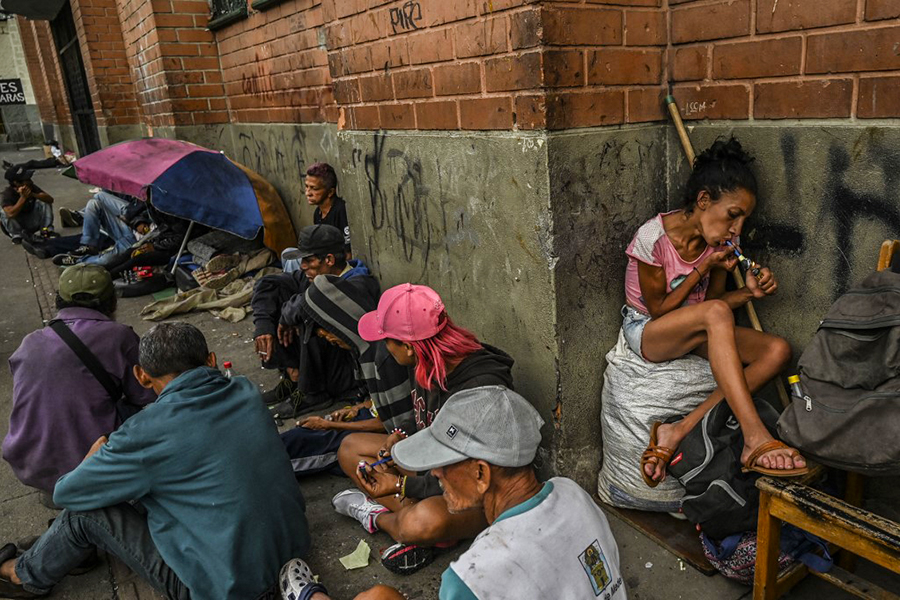 Medellín, Colombia: Three decades after cartel boss Pablo Escobar was shot dead by police on a rooftop in Medellin, the very city he had sought to uplift with drug money is being ravaged by it.
Junkies frequent hundreds of sales points dotted around Colombia's second city, which has become the epicenter of the domestic drug trade.
"Easy access? Yes, absolutely. In Medellin you can find it anywhere. Even on the floor you find drugs," Manue Morales, an out-of-work engineer and chronic user of "basuco"—the cheapest drug on the market—told AFP.
Basuco is derived from the coca leaf also used to make cocaine, and mixed with other low-grade substances.

His hands shaking, 32-year-old Morales inhaled a dose in a public park, using a pipe fashioned from a PVC tube, even as pedestrians and police milled around.
"I am a bit nervous," he confessed.
"The truth is that one is less cautious and it (the basuco) can cause you to do stupid things," said Morales, who lost his job due to drug use.
Four brief months later, all his worldly belongings fit into a worn briefcase, and he often sleeps rough.
Morales's downfall, he said, started at a so-called "vice plaza"—drug vending points that numbered about 160 in Medellin ten years ago, according to police.
Researchers estimate the figure is now closer to 800.

In 2013, some 3.5 percent of Colombians said they had ever taken an illegal substance, according to the state statistics agency.
By 2019, the number had almost tripled to 9.7 percent.
With aid from the United States, leader in the global "war on drugs", a Colombian crackdown since the early 2000s has forced traffickers to look homeward.
"A concentration of product was generated... that could not be exported due to this strong anti-drug policy," said toxicologist Juan Carlos Sanchez.
Domestic clients, however, are not getting the best of what the world's largest cocaine exporter has to offer.
Instead, they are getting hooked on cheaper, low-quality and often dangerous drugs.
With 2.2 million inhabitants, Medellin is today the city with the highest drug consumption— 15.5 percent—in Colombia.
The Medellin city council estimates that each drug "plaza" can make up to $75,000 a month —the equivalent of some 300 minimum salary earners.
But authorities say the increase in domestic drug use has gone hand-in-hand with rising insecurity.
Since 2018, more than 2,500 people have been killed in gang wars nationally, police general Herman Bustamante told AFP.
Official data does not distinguish between gangster and civilian deaths.

In Medellin, the numbers reveal a paradox.
In 1992, at the height of the search for Escobar, the city's homicide rate was 350 per 100,000. Last year it was down to 15.5, even as drug use has surged.
According to Luis Fernando Quijano of social development NGO Corpades, this was more telling of a "mafia peace" than of any real progress.
There were "pacts," he said, between narco gangs and some local authorities to allow drug trade in exchange for relative security in their areas.
"When seizures are made... it is often not the product of (police) intelligence," Quijano added. "They are delivered (by the narcos) to create the image that... the security strategy is working."
Bustamante conceded that some police have been arrested for colluding with traffickers, without giving numbers.
"As long as there are consumers... criminals will see a business opportunity," he said.

In 2018, then Medellin mayor Federico Gutierrez accompanied nearly 1,000 police who bulldozed the city's main drug market, known as "The Bronx."
Gutierrez, the right-wing candidate in presidential elections later this month, has vowed a harsher police clampdown on domestic drug trafficking.
His leftist rival Gustavo Petro wants to address drug use as a public health problem.
Since 2021, the government has demolished at least 129 vending spots countrywide.
But many quickly return, including The Bronx.
Twenty-four hours a day, vendors call out the names of their wares: "blones" (marijuana joints), "rocks" (cocaine), ecstasy or "wheels" as they call Clonazepam pills, a psychiatric medicine with sedative effects.
Others offer "tusibi"—calling it "tusi" for short or sometimes "pink cocaine"—the latest party drug based on Ketamine mixed with substances such as ecstasy and mescaline, a psychedelic derived from a cactus.
Though "banned" from street sale—considered too harmful even by the gangs—those who want it can also find heroin, at about $2.5 per gram.
Addict Julian, his discolored skin stretching over the pronounced cheekbones of his emaciated face, told AFP he needed to inject himself four times a day.
As night fell, Julian—who did not want to give his full name—met his supplier in a park thronging with people.
The transaction takes mere seconds.
"Before, you did not see people injecting themselves in the street, discarding syringes," said Julian. "We were few."
But no longer.
By Juan Sebastian SERRANO
© Agence France-Presse