Unearthing the secret superpowers of fungus

Some species of fungi can store exceptional levels of carbon underground, preventing it from heating up the Earth's atmosphere. Others help plants survive brutal droughts or fight off pests. They are "levers" to address the hazards of a warming climate, and yet they remain a mystery 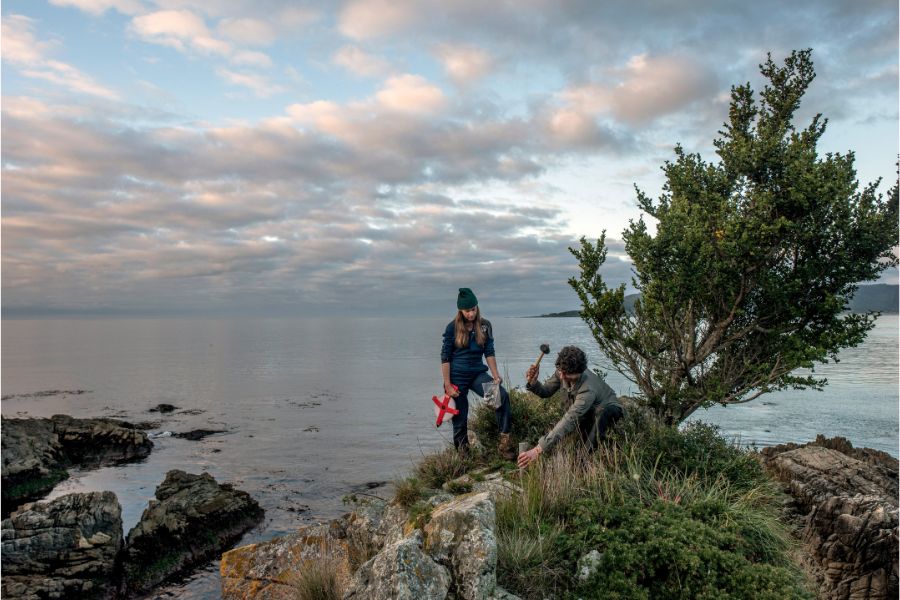 The biologists Toby Kiers, left, and Merlin Sheldrake take soil samples along the coast of Chaihuin, in Chile, on April 15, 2022. Kiers and her team of researchers are probing a vast and poorly understood universe of underground fungi that can be vital, in her view, in the era of climate change. Image: Tomas Munita/The New York Times

ALERCE COSTERO NATIONAL PARK, Chile — Toby Kiers took long strides across the spongy forest floor, felt the adrenaline rush in her veins and stopped at precisely the spot she had traveled so far to reach. Into the ground went a hollow metal cylinder. Out came a scoop of soil.
Kiers stuck her nose into the dirt, inhaled its scent, imagined what secrets it contained to help us live on a hotter planet. “What’s under here?” she asked. “What mysteries are we going to unveil?”
The soil was deposited into a clear plastic bag, then labeled with the coordinates of this exact location on Earth.
Kiers, 45, an evolutionary biologist based at the Free University of Amsterdam, is on a novel mission. She is probing a vast and poorly understood universe of underground fungi that can be vital, in her view, in the era of climate change.

Some species of fungi can store exceptional levels of carbon underground, keeping it out of the air and preventing it from heating up the Earth’s atmosphere. Others help plants survive brutal droughts or fight off pests. There are those especially good at feeding nutrients to crops, reducing the need for chemical fertilizers.
In short, they are what she called “levers” to address the hazards of a warming climate.
Yet they remain a mystery.
Kiers wants to know which fungi species are where, what they do, and which should be immediately protected. In short, she wants to create an atlas of all that which we cannot see. And all that is right under our feet.
“It’s seeing Earth’s metabolism,” she said. “Who is there? What is their function? Right now, we are concerned so heavily on the overground, we are literally missing half the picture.”
Beneath our feet, fungal networks are an intriguing ally in efforts to tame global warming. The research is focused on mycorrhizal fungi, a type that has a symbiotic relationship with plant roots.
This network is like a secret Silk Road. Fungi give the trees much-needed nutrients extracted from the soil. In exchange, the trees supply carbon they’ve pulled from the air by photosynthesis. Fungi need carbon to grow. Carbon travels one way, and nutrients like nitrogen and phosphorous the other. This underground entanglement is vital to life above.
By one estimate, 5 billion tons of carbon flow from plants to mycorrhizal fungi annually. Without help from the fungi, that carbon would likely stay in the atmosphere as carbon dioxide, the powerful greenhouse gas that is heating the planet and fueling dangerous weather. “Keeping this fungal network protected is paramount as we face climate change,” Kiers said.
In addition, the biodiversity of underground fungi is a huge factor in soil health, which is crucial to the world’s ability to feed itself as the planet warms.
Specific knowledge of the power of these networks, said Tim G. Benton, a biologist at Leeds University who isn’t involved in Kiers’ work, is “very patchy.”
“More information would be very valuable,” he said.
Yet so little is known about fungi that they are not even counted in the Convention on Biodiversity, the global treaty aimed at protecting nature. That treaty is aimed at plants and animals. Fungi are neither. They make up a separate kingdom of life altogether.
Underground, mycorrhizal fungi are crucial trading partners. Trees crave the nutrients they offer. Fungi gobble up the carbon that trees provide in return.
To understand this kingdom, fungi aficionados argue, is to see the natural world differently — less as a collection of individual species, with humans dominating them all, and more as a web of organisms dealing with crises together.

The origin of life

Fungi made the world as we know it. As some of the first life forms on the planet, they consumed minerals locked in rocks, creating what we now know as soil. Without them, there would be no plants on land, and therefore, no animals. No us.
Kiers’ expedition to southern Chile aims to fill in some of the gaps in knowledge about fungi, specifically the mycorrhizal fungi that live symbiotically with plant roots and drive carbon into the soil. That is what gives them such an urgent role on a hotter planet.
“Mycorrhizal networks,” Kiers said, “are a major global carbon sink.”
The expedition was shaped by Big Data. With the help of scientists in Switzerland, an algorithm had crunched all kinds of above-ground information — temperature, soil moisture, types of trees — and deduced where in the world Kiers might find high and low levels of underground fungal biodiversity. Then it offered coordinates, as if to say, “Go here, take a soil sample, see if I’m right.”
For their first expedition, in Chile, the researchers arrived at each location, pinpointed by the algorithm, drew a grid 30 by 30 meters, collected spoonfuls of soil, bagged it and sent it to a local lab for genetic analysis. “Once we know who’s there, we can see what they’re good at,” Kiers said.
Her partner on this expedition was Giuliana Furci, a Chilean environmentalist who, as the head of the Fungi Foundation, an advocacy group, successfully lobbied to include fungi for protection under Chilean environmental law.
Also on the expedition was biologist and writer Merlin Sheldrake and his musician brother, Cosmo, who stuck microphones into the earth to record the sounds underground.
Sometimes he captured the noise of gurgling liquids or the scratching, marching busywork of invisible organisms. Other times, just the thud of the researchers’ boots nearby.
They scooped soil from under a volcano, crisscrossed pine and eucalyptus plantations, bushwhacked through brambles, climbed up rocks jutting into the Pacific, coaxed homeowners to let them onto their properties to take a bit of dirt.
Each sample, representing 1 square kilometer of land, would be used to identify the genetic properties of fungal species that were storing particularly high levels of carbon in the dirt, or which species might help trees adapt to drought.
Kiers said she aimed to collect 10,000 samples over 18 months.

Furci was born and raised in England, where her mother, a political dissident, lived in exile during the dictatorship of Augusto Pinochet. She came to Chile when her mother returned home, and, a few years later, had what she calls “an encounter.” She saw a striking, rust-orange mushroom in a forest (she later learned it was part of the genus Gymnopilus) and wanted to know more. An obsession began.
Since then, Furci has written guidebooks on fungi and named unnamed species (a pitch-black mushroom with white scales she called “galactica”). She has helped persuade the International Union for the Conservation of Nature to include fungi as a category to protect, alongside flora and fauna.
When asked what fungi do, or how they behave, Furci became visibly annoyed. Their vast biodiversity is not only under-explored, she said, they are misunderstood. They are thought to be just one thing, but they are not.
“A morel and a button mushroom are as closely related as a flea and an elephant,” she said.
In the course of a day, she identified nine mushrooms. One resembled a hamburger bun top. Another, a witch’s hat. The colors ranged from vanilla to deep raspberry to the speckled back of a fawn.
By the end of a brief trek, she had scooped up two fistfuls of Lactarius deliciosus, which grew abundantly alongside the pine trees planted there to harvest timber, one of Chile’s main exports. Without this fungi, Furci pointed out, pines wouldn’t survive.
For dinner that night, the Lactarius were sautéed in butter.

Kiers grew up in small towns in Connecticut and Maine. Her parents sent her out with her sister to collect morels in summer. The underground became her passion.
She studied biology at Bowdoin College, worked at a research station in Panama and earned her doctorate at the University of California, Davis. She co-founded a nonprofit advocacy group, the Society for the Protection of Underground Networks.
One Thursday afternoon recently, Kiers walked through a dark, gnarly rainforest with a fellow underground fungus scholar, César Marín, from the Universidad Santo Tomás in Chile.
They were walking in an extraordinary place. A very old, very slow-growing rainforest, this section of the forest potentially holds some of the largest and oldest stores of carbon on Earth. It is home to one of the oldest trees on Earth, a massive Fitzroya, or alerce in Spanish, estimated to be at least 3,500 years old, known here as the great-grandfather alerce.
Kiers said the data they collect here will signal which mycorrhizal fungi species are doing the work of sequestering so much carbon underground.
Fungi are sensitive to human activity. Chemical fertilizers diminish their volume and diversity. Logging destroys them.
Climate change is the latest stressor, which is why Marín was keen for Kiers to sample the same three plots he had tested seven years ago. He wanted to know if the megadrought that has been melting Chile’s glaciers over the past few years has also changed the mycorrhizal networks underground.
Fungi have helped trees adapt on a millennial scale. They could be crucial to helping trees adapt in the climate crisis. “In difficult times, organisms find new symbiotic relationships in order to expand their reach,” said Merlin Sheldrake, the biologist. “Crisis is the crucible of new relationships.”
On the last Friday evening of their weeklong expedition, they hiked to a rocky outcropping on the coast. “Zen factor is high,” Merlin Sheldrake said.
An otter played in the water. The sun shone golden on the lapping waves. Some of the boulders were dotted with lichen the color of marigold. As they have for millennia, Sheldrake observed, fungi were eating rock.
By the end of this one-week outing, they had collected 30 bags of soil. Nearby, over the next several weeks, Marín’s team would gather 64 more. It’s a drop in the bucket, considering the thousands needed to construct the global map they envision.
This week, Kiers is on the other side of the world, in the Apennines, the mountain range in Italy. North of the place she planned to collect samples, a glacier has collapsed. Wildfires rage nearby.
“This is a race against time,” she said in an email. “We are nervous these fungal communities are disappearing before we can even document who is there.”