The breach of the threshold comes at an inopportune moment, as historically low interest rates are being replaced with higher borrowing costs as the Federal Reserve tries to combat rapid inflation 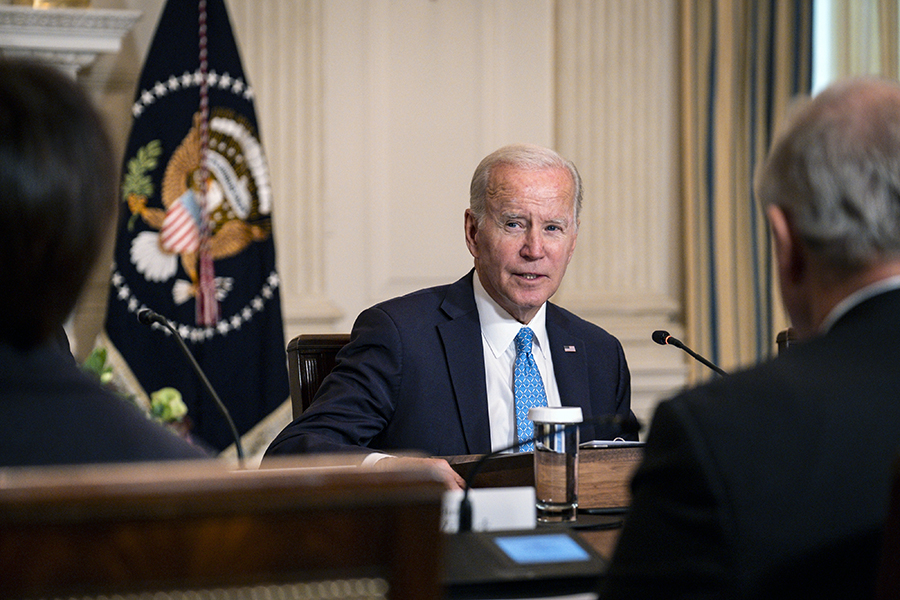 President Joe Biden leads a meeting at the White House on Sept. 26, 2022. Biden has pledged to bring down federal budget deficits by $1 trillion over a decade. (Pete Marovich/The New York Times)

The breach of the threshold, which was revealed in a Treasury Department report, comes at an inopportune moment, as historically low interest rates are being replaced with higher borrowing costs as the Federal Reserve tries to combat rapid inflation. While record levels of government borrowing to fight the pandemic and finance tax cuts were once seen by some policymakers as affordable, those higher rates are making America’s debts more costly over time.

“So many of the concerns we’ve had about our growing debt path are starting to show themselves as we both grow our debt and grow our rates of interest,” said Michael A. Peterson, the CEO of the Peter G. Peterson Foundation, which promotes deficit reduction. “Too many people were complacent about our debt path in part because rates were so low.”

The new figures come at a volatile economic moment, with investors veering between fears of a global recession and optimism that one may be avoided. On Tuesday, markets rallied close to 3%, extending gains from Monday and putting Wall Street on a more positive path after a brutal September. The rally stemmed in part from a government report that showed signs of some slowing in the labor market. Investors took that as a signal that the Fed’s interest rate increases, which have raised borrowing costs for companies, may soon begin to slow.

Higher rates could add $1 trillion to what the federal government spends on interest payments this decade, according to Peterson Foundation estimates. That is on top of the record $8.1 trillion in debt costs that the Congressional Budget Office projected in May. Expenditures on interest could exceed what the United States spends on national defense by 2029, if interest rates on public debt rise to be just 1 percentage point higher than what the CBO estimated over the next few years.

The Fed, which slashed rates to near-zero during the pandemic, has since begun raising them to try to tame the most rapid inflation in 40 years. Rates are now set in a range between 3% and 3.25%, and the central bank’s most recent projections saw them climbing to 4.6% by the end of next year — up from 3.8% in an earlier forecast.

Federal debt is not like a 30-year mortgage that is paid off at a fixed interest rate. The government is constantly issuing new debt, which effectively means its borrowing costs rise and fall along with interest rates.

The $31 trillion threshold also poses a political problem for President Joe Biden, who has pledged to put the U.S. on a more sustainable fiscal path and reduce federal budget deficits by $1 trillion over a decade. Deficits occur when the government spends more money than it takes in through tax revenue.

The Committee for a Responsible Federal Budget estimates that Biden’s policies have added nearly $5 trillion to deficits since he took office. That projection includes Biden’s signature $1.9 trillion economic stimulus bill, a variety of new congressionally approved spending initiatives and a student loan debt forgiveness plan that is expected to cost taxpayers nearly $400 billion over 30 years.

White House budget officials estimated in August that the deficit would be just over $1 trillion for the 2022 fiscal year, which was nearly $400 billion less than they had originally forecast. Biden says those numbers are the product of his policies to stoke economic growth, like the American Rescue Plan.

“We brought down the deficit $350 billion the first year and nearly $1.5 trillion this year,” Biden told a Democratic National Committee event in Washington last month.

Those figures obscure the effects of the rescue plan, which was financed entirely with borrowed money. Much of the deficit reduction Biden is championing reflects the fact that he and former President Donald Trump signed laws that borrowed heavily in order to mitigate the damage of the pandemic recession. The deficit has fallen in large part because policymakers did not pass another large round of pandemic aid this year.

Biden’s budget office now expects the deficit to rise higher than previously expected over the next three years, largely because of higher interest costs as a result of rising rates. In recent weeks, borrowing costs have climbed even higher than the White House expected, suggesting officials will need to revise their deficit expectations upward again.

“I don’t know where interest rates are going, but whatever you thought a year ago, you definitely have to revise that,” said Jason Furman, a Harvard economist and former top economic aide to President Barack Obama.

“The deficit path is almost certainly too high,” given the rise in rates in recent weeks, Furman added. “We were sort of at the edge of ‘OK’ before, and we are past ‘OK’ now.”

In recent weeks, administration officials have walked a thin line on deficits. They have championed deficit-cutting moves — like the climate, health care and tax bill Biden signed into law in August — as necessary complements to the Fed’s efforts to bring down inflation by raising interest rates. They have said Biden would be happy to sign further deficit cuts into law, in the form of tax increases on high earners and large corporations.

“Neither the president-elect, nor I, propose this relief package without an appreciation for the country’s debt burden,” Yellen said. “But right now, with interest rates at historic lows, the smartest thing we can do is act big.”

Critics of the Biden administration’s spending initiatives have warned that a reliance on low interest rates to justify expansionary policies could come back to bite the United States’ economy, as the debt burden mounts.

Brian Riedl, a senior fellow at the Manhattan Institute, said that the United States was unwise to make long-term debt commitments based on short-term, adjustable interest rates. Adding new debt, he said, as interest rates rise would be pouring fuel on a fiscal fire.

“Basically, Washington has engaged in a long-term debt spree and been fortunate to be bailed out by low interest rates up to this point,” Riedl said. “But the Treasury never locked in those low rates long term, and now rising rates may collide with that escalating debt with horribly expensive results.”

Tweets by @forbesindia
Challenges of realising a global carbon price
Koselig: A Norwegian philosophy that could make you love winter