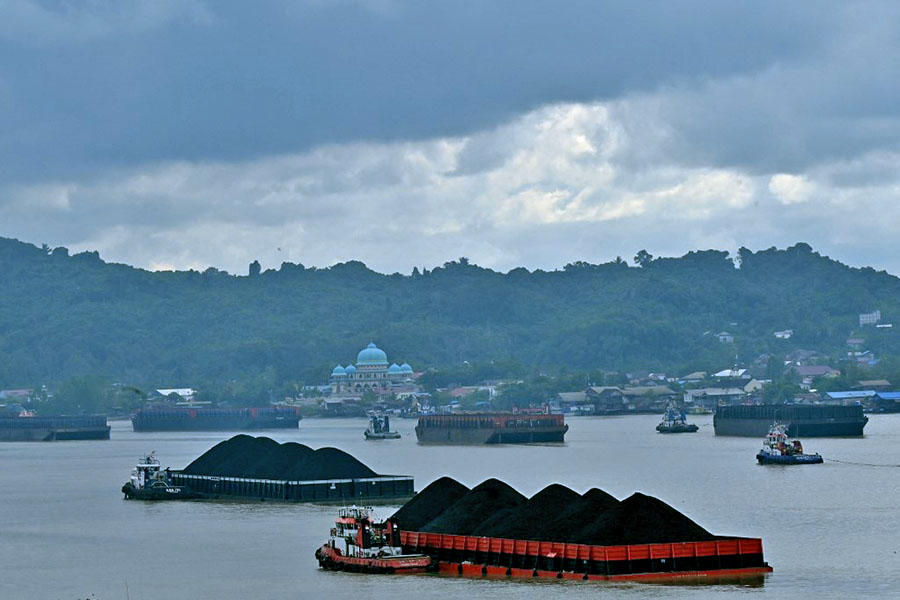 In this picture taken on August 16, 2022, piles of coal are seen on barges in Samarinda, East Kalimantan, Borneo. IEA called for international finance centres to channel funding and expertise more quickly to coal-dependent nations in order to accelerate their low-carbon transition. Image: Adek Berry/AFP

Paris, France: A lack of international collaboration risks undermining efforts to decarbonise polluting sectors and could lead to decades of delay on the road towards net zero emissions, the International Energy Agency (IEA) said Tuesday.
At last November's COP26 climate summit in Glasgow, 45 countries vowed to work together on the deployment of green tech across a variety of sectors including electricity, transport and agriculture.

Against the backdrop of surging energy prices and the threat of a global food crisis, the IEA urged nations to use the coming COP27 meeting in Egypt to "accelerate progress towards net zero emissions by decades, cut energy costs and boost food security for billions of people worldwide".
Greater coordination between countries would make key green technologies cheaper for developing nations to deploy at scale, the IEA said.
Its Breakthrough Agenda Report, requested by world leaders to check on the initiative's progress, noted some achievements, including a doubling of sales of electric vehicles to some 6.6 million units in 2021.
It also said that renewable capacity in 2022 is forecast to be up eight percent year-on-year, pushing past the 300 gigawatt mark for the first time — the equivalent to powering some 225 million households.
Also read: COP26: Will India commit to or cop-out of climate obligations?
But it said much more progress was needed for the global economy to achieve carbon neutrality this century.
The IEA recommended the establishment of low-carbon "super grids" spanning multiple nations to improve energy security while reducing emissions.
It also called for international finance centres to channel funding and expertise more quickly to coal-dependent nations in order to accelerate their low-carbon transition.
"We see a major challenge, which is international collaboration between the countries and across the sectors," said IEA director Fatih Birol.
Power, road transport, steel, hydrogen and agriculture account for some 60 percent of greenhouse gas emissions and the IEA says the bulk of reductions needed by 2030 in order to keep the Paris Agreement temperature goal of 1.5C in play should come from the five sectors.
"Through international collaboration, we can make the transition quicker, cheaper and easier for everyone," said Birol. "Without this collaboration, the transition to net zero emissions will be much more challenging and could be delayed by decades."

Tweets by @forbesindia
Blackout: The energy crisis looming over Europe and the rest of the world
Young hacker tricks way into Uber's system: reports