India's poorest state has been posting impressive GDP growth. But the figures may need sharper scrutiny

Since the start of 2009, Bihar’s growth rate was one of those rare state-level economic variables hotly debated and discussed throughout the country.

Reports of Bihar being the fastest growing state in the country made every one sit up. Despite many academics and journalists poring over its economic data, consensus on its true growth rate has yet to be reached. And given that state-wise economic growth data tends to get reconciled with a lag of two years, consensus is elusive.

A cursory look at Bihar’s growth figures over the last decade explains why they lend themselves to such varied interpretations and analysis. Not only has the yearly growth rate swung wildly every year, the data also gets revised from the initial estimates. The initial estimates for 2007-08 and 2008-09 were nowhere near the final figures (see graph). As a result, the analysis on Bihar’s economy and Nitish Kumar’s rule could change between February and March (when the last state economic survey was released) since Bihar no longer grew at 6.35 percent — it grew at a more remarkable 10.74 percent. 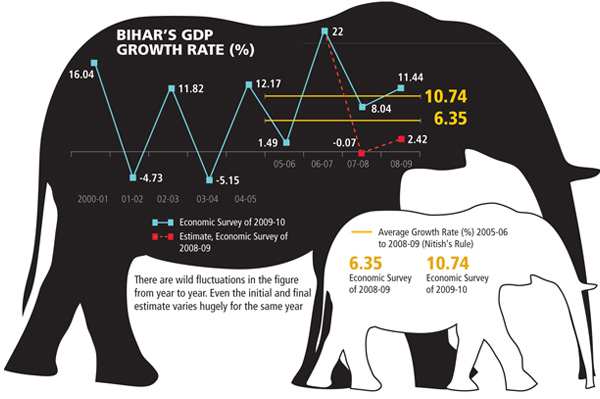 Given the volatile characteristic of growth data, observers like Shaibal Gupta of the Patna-based Asia Development Research Institute feel that Bihar’s economic growth has yet to stabilise and as such, it is too early to comment based on the growth data alone.

Praveen Jha, professor of economics at the Jawaharlal Nehru University stops short of saying that the figures are fudged. “The volatility is simply inexplicable. In fact, a committee led by state cabinet minister, Jagdanand Singh, during the last year of RJD (Lalu Prasad’s party) rule concluded that the data collected within the state is not reliable,” points out Jha, who has done a detailed analysis of Bihar’s growth rate.

A look at Gujarat, which is close to two and half times Bihar’s economy and is seen by many as the fastest growing state in the country today, reveals a crucial difference. While the growth rate in Gujarat may occasionally decelerate from one year to another, it never registers negative growth or an actual decline in the state GDP. Bihar, on the other hand, is habituated to going two steps forward and one step back. Arresting this tendency could just be the key thing that Nitish Kumar needs to focus on in his second term.

Tweets by @forbesindia
Fixed Income: The 3 'I's Of Investing
Art Is Getting Hotter