Cellphones And Cancer: The Evidence Is Not Clear

Is that cellphone appended to your ear a health risk? A recent health warning from the World Health Organization (WHO) has fuelled a furious debate as cellphones have been added to the list of things that might cause cancer.  However, the WHO study, though an admirable attempt, confuses more than it enlightens.

The first problem is with the design of the study. The study took two groups. One group had brain tumours, malignant and benign. The second group did not have any brain tumours. Both groups were similar in age (30-59), gender and place of residence. With all things being equal, if the only difference was that the group with tumours used cellphones more intensively, then cellphones could be the prime suspect for causing those tumours. Unfortunately, since the cellphone usage of both groups was quite similar, the study could not conclusively state that cellphones were dangerous. 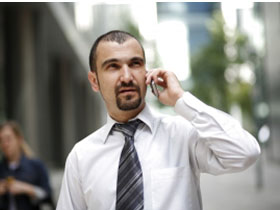 The study contains more ambiguities and this can be seen in the graph. According to the graph,  those people who used cellphones for more than 1,640 hours over a 10-year period had a 40 percent higher risk of getting a brain tumour. But for other users, the study’s results are puzzling. For instance, for people who have just started using cellphones or ‘light users’ there is zero risk of contracting brain tumour. And for medium to slightly heavy users — between 60 hours and 1,630 hours  — the risk of contracting a tumour came down!  The numbers just don’t add up. 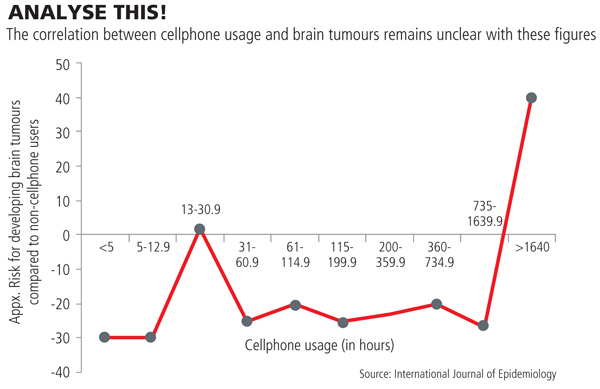 The Interphone study also looked at odds ratios. This is basically the odds for getting cancer if you ever used a cellphone regularly divided by the odds for getting cancer if you never used one regularly. Yet, as the Interphone researchers pointed out, if those who never used cellphones were excluded, and only the lightest users were contrasted with the heavier ones, then the sensational finding of the survey says that the risk among the heaviest users was 82 percent greater than that of light users.

Having said that, the Interphone study challenges the notion of a graded response. A graded response means that if something is bad and you have more of it, you will be worse off. Cigarettes are a prime example: One cigarette a day is bad, five is worse and 16 is really bad. The WHO study actually shows that for some users the risk goes down even though the cellphone usage keeps increasing.

Not surprisingly, the researchers disagreed over how to interpret the results, which held up the publication of the study. Meanwhile, cellphone usage has both surged and changed. So, usage patterns of the study participants don’t match those of mobile users today. Cellphones are ubiquitous, but today most people keep them at arm’s length. They either use headsets or use their phones more for data or texting. Additionally, some of today’s phones emit less radiation than older models. WHO has classified the radio frequency exposure from cellphones in the 2B risk category along with the pesticide DDT, gasoline engine exhaust, and coffee. Would this lead us to believe that talking on a cellphone could cause cancer as much as drinking coffee?

Seventy-two percent of naturally occurring chemicals in roasted coffee produce tumours in rodents. But a cup of coffee is a culprit only if consumed in high doses. “It is simply impossible to replicate this kind of dose through drinking coffee,” says a report from the Carcinogenic Potency Project at UC Berkeley. Could the case be similar for cellphones?Of course, it is better to be safe than sorry. But considering the numbers at this point in time, one could cause more damage to the brain with a hit on the head with a cellphone. More data is needed to support the “possible carcinogen” theory of cellphone use before it can be proved as much of a threat to human health as say, smoking or not using sunscreen.