Solar power has had a slow start, but with increasing corporate interest, it might just make the 1,100 MW target by 2012

For all the hoopla around solar energy, less than 2 MW of power gets produced in India by harnessing the sun. The first phase target of the Jawaharlal Nehru National Solar Mission (part of the National Action Plan on climate change flagged off by Prime Minister Manmohan Singh a year ago) is to commission 1,100 MW of solar power by 2012, gathering speed to reach 20,000 MW by 2020. This is a figure that sounds utopian to even the greenest energy evangelist. Most installed projects currently operate at below 20 percent of their capacity and funding by banks and financial institutions is slow.

But things are beginning to change. The combined impact of the policy changes on power tariffs and new state government interest in solar energy has brought a buzz to sun power in the past four to six months. Recent rounds of bidding for projects by the two government companies, Ireda (Indian renewable energy development agency) and NVVN (NTPC Vidyut Vyapar Nigam) have seen an overwhelming response. Bids opened at 9 a.m., and the Ireda Web site shows the list of the final 105 who made it, with their ‘timings’ (the time it took to load the application online) down to the milliseconds. The cut off (last company that made it to the list) is at 4 minutes, 20 seconds and 22 milliseconds. 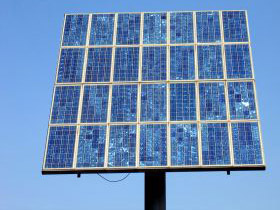 “Bidding for the smaller projects of less than 2 MW in July, was like the buzzer round of Kaun Banega Crorepati,” says Anmol Singh Jaggi, director of Gensol consultants, which was among those who eventually won a project.

A second round of much larger projects (5 MW and above) are to be awarded by the NVVN by the end of November. These are for 150 MW of solar photovoltaic power and 470 MW of solar-thermal power. Photovoltaics (PV) are arrays of cells containing a material that converts solar radiation into electricity directly, while solar thermal is a technology where solar energy is first converted to thermal energy (heat).

Solar power developers are competing hard for the projects on offer and the NVVN has received bids for generating 1,740 MW though it plans to allot only 150 MW. “Right now, it looks like there are a lot of people trying to become first movers in solar energy at any cost,’’ says Inderpreet Wadhwa, CEO of Azure power. Delhi-based Azure has partnered with North America’s largest solar developer SunEdison, to develop a 15 MW solar plant in Gujarat. It already has a project up at Punjab, and is among the few players focussed on solar energy.

Many bids are being made at costs per mega-watt that are far lower than the estimates by the CERC (central electricity regulatory commission). Moser Baer, for instance, which is among the most aggressive of the companies in the area, bid and won a project for MahaGenco (the Maharashtra government electricity generation company) at Rs. 12 crore per MW, while the CERC projection for the project was Rs. 17 crore per MW. Private equity firm Blackstone recently invested $300 million in Moser Baer Projects, the new power venture floated by the promoters of the optical storage device company.
Many companies have entered the fray lured by the stability of long term (30 year) returns at little recurring cost. The government has established a (indirect) subsidy mechanism by bundling expensive solar power with cheaper thermal energy. NVVN will bundle four units of traditional power with each unit of solar power to bring down the final cost to about Rs. 3.50 a unit. As the trading agency, NVVN will sell this (more expensive) power to spot buyers on the exchanges.

But what most players had not bargained for is stiff competition that is now expected in the bidding. The reverse bidding is likely to lead to a lot of bids at costs far lower than the CERC notified for 2010-2011. This was at Rs. 17.90 a unit for PV and Rs. 15.40 for CSP (concentrated solar power). Financial closure will be tough for the larger projects. Most of the financing is off balance sheet, based on the cash-flow of the project itself.

While private equity firms and multilateral funding agencies are keen to invest in solar power, conventional banks and financial institutions are much more wary. Like their thermal counterparts in the first wave of IPP development in the 1990s, financing is becoming a big barrier for the solar developers. Public sector banks and financial institutions say they have no way to assess the commercial viability of the projects, since there is no previous data available. They are also apprehensive about the way the power purchase agreements (PPA) are structured. The biggest uncertainty is about who will compensate for the shortfall if these plants fail to achieve minimum load factor of 20 percent promised in the PPA.

The Ministry of New and Renewable Energy (MNRE) is bringing together banks and developers to evolve new funding models. “We recognise the need for equity financing to promote solar power projects. If we find there is funding gap, we will recommend a dedicated equity fund to the government,” says Indian Renewable Energy Development Agency (IREDA) chairman and managing director Debashish Majumdar.

Another problem, says R. Chandrasekhar, Global CEO of IT Power group, one of the oldest renewable power consultancies based in the UK, could be the shortage of water. “Solar power production, particularly solar-thermal power, requires large amount of water to keep the panels clean and to generate the power. Most areas where there is plenty of sun are usually those where water is not plentiful,’’ he says. While state governments have committed to providing the required quantities of water, their promises will be put to test during summer months. Solar projects will also have to look at storage capacity, so power generated can be stored and used as a base load instead of being used only to supply the peak demand. So far all solar projects are designed to operate for about six hours daily, to feed in to peak hour demand from the grid.

Despite the slow pace so far, all signs are that solar power is on the fast track now. The policy incentives by the government, combined with entrepreneurial interest in the projects, may just lead to the change that promoters of cleantech have been advocating for several years. Though progress is far from the speed of light, the next couple of years could well be the turning point.