It requires reforms. And while the expression 'reforms' is bandied around, it needs to be well-defined 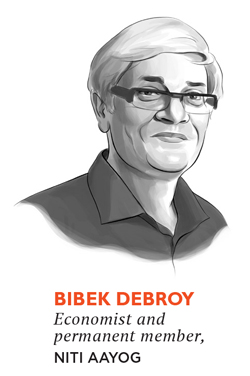 The government, as indicated in the Economic Survey, expects GDP growth to be between 8.1 and 8.5 percent in 2015-16. There is a catch in this number. The methodology for estimating GDP has changed. (a) The base year has changed from 2004-05 to 2011-12. (b) The source of data has changed for the corporate sector, financial corporations and local bodies and autonomous institutions. (c) There is greater conformity with international systems of national accounts, such as in treatment of taxes and subsidies. Had it been a simple question of changing the base year from 2004-05 to 2011-12 or adjusting for taxes and subsidies, appropriate adjustments could have been made to enable conversion of apples to oranges. Unfortunately, sources of data are different. In gauging growth recovery, many people are still more comfortable with the old GDP series. But with the new series, growth was 4.8 percent in 2012-13, 6.8 percent in 2013-14 and 7.4 percent in 2014-15. We have a growth recovery of between 0.7 percent and 1.1 percent in 2015-16. With the old GDP series, growth in 2015-16 will probably be around 6.5 percent. Growth isn’t a mere number. Depending on the composition of growth and its distribution, it converts into more jobs, higher real incomes and poverty reduction. At the risk of some generalisation, the 2014 mandate was about growth, development and governance, with inflation and corruption subsumed.

The new government is a Union government in Delhi. It is important to make this point, because expectations run ahead of what is feasible and doable. India is a federal country and many areas of reform (factor markets like land/labour) are the domain of states, under the Seventh Schedule of the Constitution. Most of agriculture, important for poverty reduction, is also a State subject. During the high growth years, 2003-04 to 2007-08, the external world was kinder. However, the entire growth slowdown cannot be blamed on a more malignant external environment. It is no one’s case that India’s real sector is decoupled from global developments or that there will be double-digit real GDP growth before the external environment turns more benign. But it is indeed the case that there is plenty of endogenous slack. While it is difficult to indicate a precise number, using the old GDP series, that endogenous slack should allow growth to incrementally inch up to between 8 and 8.5 percent. Incrementally is the key word, not overnight. We are probably at 6.5 percent in 2015-16 and the transition to 8.5 percent isn’t automatic. It requires reforms. The expression ‘reforms’ is bandied around, but it needs to be defined. While there is variability across states, much of the growth momentum will come from reforming factor markets (add natural resources to the list). That is not only conditional on what states do. When these reforms aren’t conditional on states, they sometimes require legislative changes, a time-consuming process, even if consensus exists.

Subject to these comments, one way to think about what is being attempted is the following. First, remove the malignant and undesirable elements of dysfunctional government intervention that get in the way of a sector’s development. For manufacturing, elements of that are in liberalising the FDI equity caps for defence, railway infrastructure and construction. Indeed, one can add deregulation of diesel prices, coal, insurance and minerals legislation to that list.

Also in that same category are elements like streamlining the processes for applying for industrial licences and industrial entrepreneur memorandum, extending the validity of industrial licences, unifying forms that can be submitted online (including for labour laws), integrating the services of all central government departments and ministries through a single-window IT platform and self-certification (the Boilers Act being an instance), amendments in the Apprentices Act and even the PRAGATI (Pro-Active Governance and Timely Implementation) initiative. Naturally, the Doing Business indicators of the World Bank spring to mind. These are based on seven categories of starting a business — dealing with construction permits, getting electricity, registering property, getting credit, protecting minority investors, paying taxes, trading across borders, enforcing contracts and resolving insolvency. Such surveys do indicate that all is not well on procedures for doing business. Some of these may be legislative, based on statutes. Others may be executive (rules, orders and regulations). Broadly, they cover three stages of an enterprise — entry, functioning and exit. 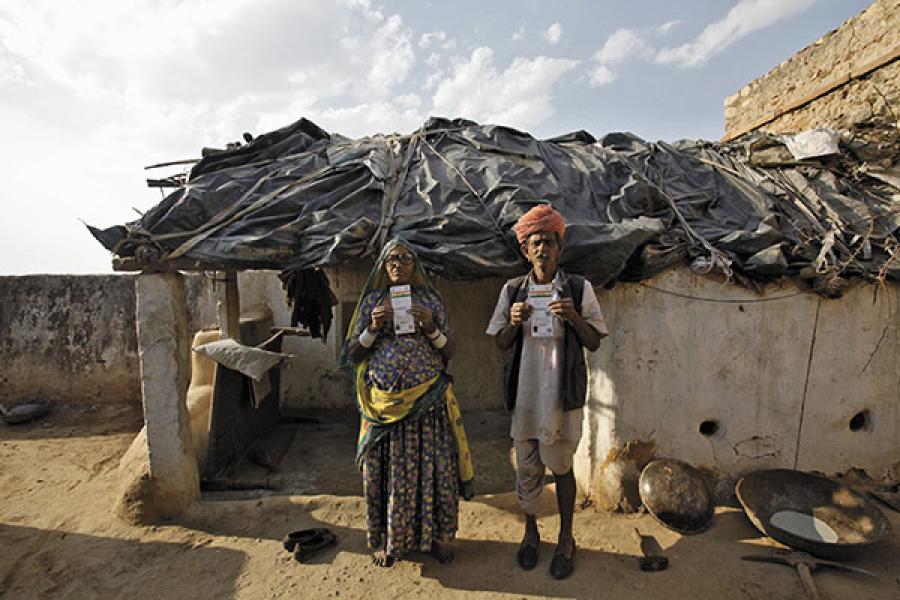 Image: Mansi Thapliyal / Reuters
A couple display their UID cards outside their hut in Merta, Rajasthan. Aadhaar, Jan-Dhan Yojana and Mobile were the fundamental governance changes of last year

Improving the business climate is not something that needs to be done only for the corporate sector. It is even more important for the MSME sector, estimated to account for 37.5 percent of GDP. Complicated and non-transparent procedures aren’t distributionally neutral. They tend to hurt smaller businesses relatively more. Labour laws figure prominently in statutory and executive procedures that require simplification, so that the burden of the Inspector Raj is reduced. At that aggregate and broad level, the directions for reform are the following: (a) Unify and harmonise laws (both statutory and executive); (b) weed out old and dysfunctional laws; and (c) eliminate unnecessary government intervention. Since labour is in the Concurrent List, a large part of the agenda for reform is in the domain of the states and Rajasthan is an example of a state that has liberalised considerably. The legal infrastructure forms the backbone of any development template and items (a), (b) and (c) above apply not only to labour laws, but to all laws in general. The Law Commission has produced four reports on old and dysfunctional laws and several have been repealed.

Next, one should mention public goods and services. I am not using the word ‘public goods’ in a strict economist’s sense. In a strict economist’s sense, most of these are collective private goods and most people are involuntarily poor because they lack access to these goods and services (roads, water, electricity, schools, skills, health outcomes, financial products, justice delivery). Since there are opportunity costs of resources, money spent on subsidies cannot be spent on these. That perceptible shift under the new government is thus a dole to development shift. Even if the government doesn’t actually provide these goods and services, it may sometimes have to finance them, if nothing else, to subsidise those who are BPL (below the poverty line).

That brings one to the question of tax reforms. Because there is a time-lag in compiling data at the state level, figures on tax/GDP are slightly old and pertain to 2013-14. They will nevertheless illustrate the point.

In 2013-14, the overall tax/GDP ratio was 17.87 percent, 10.87 percent on account of central taxes and 7.01 percent on account of state-level taxes. India’s tax/GDP ratio, both direct and indirect, should be higher. Though tax evasion indeed has a role in these low numbers, there is a difference between tax avoidance (which is legal) and tax evasion (which is illegal). Stated differently, these low levels are primarily because of exemptions. Exemptions also prevent a reduction in compliance costs. In the tax reform agenda that is being contemplated, with both DTC (Direct Taxes Code) and GST (Goods and Services Tax), exemption removal is a key element. While there is no clear timeline for DTC yet, GST has kicked off, or will kick off from April 1, 2016. With a dual structure (half and half between Union and state governments), we don’t know details of the rates yet. That will be determined by the GST Council.

Who provides those public goods and services? Not the Union government. It is more state governments, even more typically, local bodies. Therefore, the 14th Finance Commission’s recommendations are not only welcome, they also revamp the present institutional mechanism for devolution (at least for Union to state). The Plan versus non-Plan distinction goes, ‘untied’ funds with state governments increase and rigidity of templates for centrally sponsored schemes is relaxed. Therefore, to a large extent, states are free to decide what that money is going to be spent on — what public goods and services. In addition, the BPL identification is decentralised, through the 2011 Socio Economic Caste Census (SECC), which is a decentralised means of identifying BPL households, at least potentially.

Splice this with the large number of accounts opened under the Pradhan Mantri Jan-Dhan Yojana (PMJDY). Unbanked people are less of a problem now, though there still need to be financial products to persuade people to use these accounts. Splice this with the Aadhaar data base. For BPL households, you then have a means of direct benefit transfers (DBT) to bank accounts. Other than pensions and scholarships, this is really being tried out for LPG subsidies now. Potentially, the 14th Finance Commission and what Economic Survey calls JAM (Jan-Dhan Yojana, Aadhaar, Mobile) are the fundamental governance changes of the last one year.

(The views expressed are personal)

Tweets by @forbesindia
Ayaz Memon: Choose adventurism over pragmatism, Mr Modi
CP Gurnani: It's been a year of basking in the global limelight