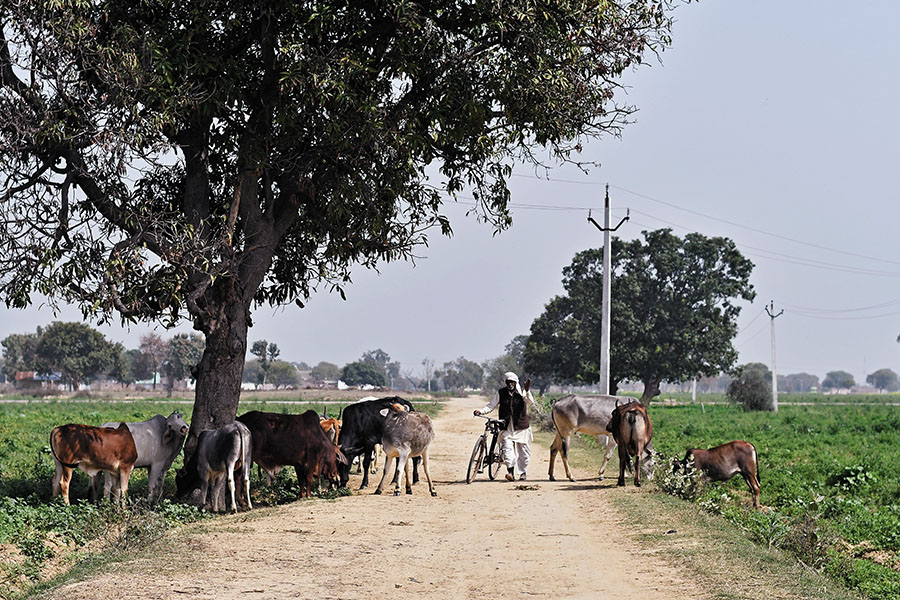 Villagers say the issue of stray cattle will have an impact on how farmers vote
Image: Anindito Mukherjee / Bloomberg via Getty Images

As the flight descends into Varanasi airport, the only thing you can see are fields of golden wheat, ready to be harvested, and fields of sugarcane where farmers are already harvesting their crop. With the last phase of elections scheduled for May 19 in Uttar Pradesh, Forbes India travels from Varanasi to Lucknow to understand what matters to Purvanchal’s voters:

Fifty-year-old Premlal, who used to make handstitched garments (kaalin), has lived all his life in Jayapur, known as Prime Minister Narendra Modi’s adopted village, which is an hour’s drive from Varanasi. Recently, however, he has taken to cycling every day for an hour-and-a-half or two hours to the market where daily wage labourers hope to find work. On a good day he manages to make ₹300 to ₹350 for a day’s work; on other days he does not get any job and returns home.

“The orders for kaalin work have dried up in our village, and now people go out to find work,” says Premlal, who, like many others in his village, is still waiting for a grant under the Pradhan Mantri Awas Yojana. Some people in the village of 850 houses have received the government grant to build homes and toilets, but most have not.

With farming being the most common occupation in Jayapur, farmers are also facing the nuisance of stray cattle. The Uttar Pradesh government, under Chief Minister Yogi Adityanath, has fiercely enforced laws against the slaughter of cows, which has led to a rise in stray cattle that wander around and damage crops.

In Loha Tikar village of Mau district, 133 km from Jayapur, farmers have a similar story to tell. “Stray cattle entered my farm, and we had to face a loss of ₹80,000 to ₹90,000. From what will I now make money?” asks Lallan Yadav, a retired army man who now farms wheat and sugarcane. Yadav says that prices of raw materials such as urea and fertilisers have increased in recent years, and the government’s minimum support price isn’t enough to run a family.

Yadav believes that as losses mount, the issue of stray cattle will have an impact on how farmers vote in the state. A lot of people have also not received the grants for building homes and toilets, as promised by the government.

Most villagers say that those who have close connections with the Gram Sarpanch are able to get their applications under the Pradhan Mantri Awas Yojana approved. Even then the Sarpanch keeps a share of the grant money for himself; from an allocation of ₹12,000, meant to be used by a single household to build a toilet, he will pocket ₹2,000 to ₹4,000. Toilets have also not really resolved the issue of open defecation, with several women admitting that the toilets in their homes are used only by the children.

Although government schemes such as the Pradhan Mantri Awas Yojana (grants for building homes) and the Pradhan Mantri Shauchalay Yojana (grants for building toilets) have gained popularity, awareness around other schemes such as Ayushman Bharat Yojana (health insurance) and Ujjwala (subsidies on cooking gas) appears to be far less.

Villagers say that although during the 2014 elections there was a wave of popularity for the BJP, that wave has receded over time and caste has once again become the most important factor for deciding who these communities will vote for.

Radhika (35) and Dubijana (70) are residents of Mohanlalpur village in Maghar, Sant Kabir Nagar. They belong to the fishing community, among which—except for one family—no one has received grants to build either homes or toilets. “We don’t even know half the schemes that are available for us,” says Dubijana. “No one comes and tells us anything. Only when the elections come they will come asking for votes.”

While most people in villages are still struggling to receive their share of welfare grants, Premlal simply adds: “We are okay with whatever we have. But my only request is, can you tell someone to construct a shade over the Ambedkar statue in our village? That is all that we want.”

While the poor wait for the basic necessities, small and medium business owners in the state are fighting online ecommerce companies that have taken away a chunk of their clientele. As ecommerce players invest more in last-mile deliveries in smaller towns and cities, these shopkeepers, who usually cater to the lower middle-class and middle-class, have seen their customers dwindle over the last few years.

Villagers say that although during the 2014 elections there was a wave of popularity for the BJP, that wave has receded over time


At a shoe shop in Urdu Bazar in Gorakhpur, brand new shoes line the shelves, but sit covered in dust. “The customer who had the capacity to earlier spend ₹1,000 or ₹1,500  in our shops has now moved to online shopping, and what we are left with are people from the lower economic segment, for whom price becomes an issue,” says Mohamaad Tashfeen, the owner of a shoe shop in Urdu Bazar, adding, “We hope the government will look into our problems.”

Arman Ulla Khan has been running his plastics shop at Urdu Bazar for decades. “The lanes of the market are so narrow that no one wants to enter this chaos,” he says, while having tea with his friends. “The government has now decided to widen the lanes, which is good for us and hopefully the customers will return. But GST choked the jewellery market for over 54 days, which caused some strain on their business.”

In recent times, Gorakhpur has witnessed some movement in the political circles. Pravin Nishad, of the Nishad Party, had won the Gorakhpur by-election in March 2018, by defeating BJP’s Upendra Dutt Shukla, but joined the BJP on April 4 this year in the hope of getting a Lok Sabha ticket. On April 16, however, BJP announced Bhojpuri actor Ravi Kishan as its Lok Sabha candidate from Gorakhpur, while Nishad was offered a seat from Sant Kabir Nagar.

Manish Yadav (28) is a small retailer of cement and sand at Saket Puri Colony in Faizabad-Ayodhya, who has been running his shop for the last few years and makes around ₹2,500 to ₹3,000 per month. Over the last five to six months his earnings have fallen, with GST impacting his sales. Although cement prices have gone up in the last few weeks, sales have not.

“Cement prices keep increasing but people are not investing in land or building houses. If they don’t build, how will I sell my cement?” he says. “Demand bahut kam ho gaya hai, kamaai kam ho gayi hai [demand has fallen, as have my earnings].” He hopes that things will improve after the elections.

A short distance ahead of Yadav’s shop lives Sanjay Tiwari, the owner of one of the largest private schools in the neighbourhood, where the monthly fee is ₹2,500. “We don’t see any shortage of work, and the education in private schools has improved a lot. Even in public schools, it has seen a significant improvement. But execution remains a big issue with public education,” says Tiwari.

Uttar Pradesh is trying hard to change its image. While the eight-hour drive from Varanasi to Gorakhpur is rough, with no concrete roads, Gorakhpur and Lucknow are connected by smooth four-lane highways.

Highlighting the gap in the socio-economic levels within the state is the Ujjwala scheme: The central government bears the cost of a new LPG connection, and recovers the cost over six cylinder refills, starting from the seventh refill. However, the customer has to pay nearly ₹750 for refills. One of the largest Indane distributors in Mau says that despite selling 7,000 new LPG connections last year, only 20 percent of his customers have come back for even the first refill.

While infrastructure and asset creation in terms of grants for homes and insurance schemes have found their way, it is yet to be determined if development can score over casteism in this populous state.