Chennai gets the realty chills

As the city's real estate sector reels under a prolonged slowdown in sales, developers like Akshaya are changing strategies to cope 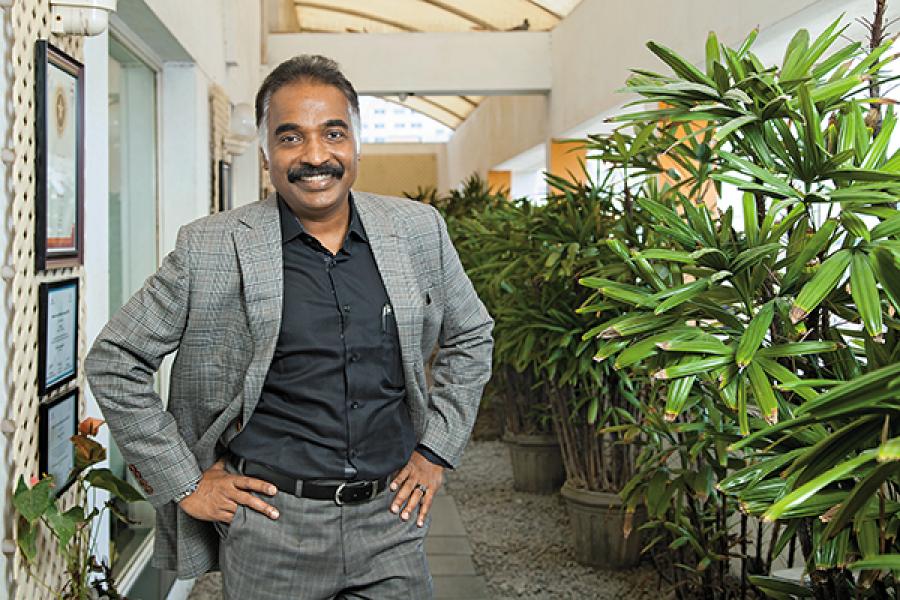 For the longest time, drawing room conversations in Chennai have been about how the city’s weather could best be described in three words: Hot, hotter, hottest. But Chennai does enjoy some fine weather in January, a time when morning walkers, who feel the chill, wear light sweaters and mufflers.

There’s another chill, however, that is being felt in Chennai; one that has lasted for much longer than its usual number of months. And comforters of different kinds are being pulled out to combat it.

A December 2015 report by property consultancy firm Knight Frank shows that the number of new residential unit launches in Chennai has dipped by 58 percent over a three-year period: 37,079 in 2012 to 15,541 by the end of 2015. During the same period, there was a 34 percent dip in absorption (purchase) of residential units.

On both metrics—new launches (supply) and absorption (demand)—Chennai is worse off than other southern cities such as Bengaluru and Hyderabad. The Knight Frank report says that by the end of 2015, Bengaluru saw a 25 percent decline in new launches and a 1.1 percent dip in absorption (the number of units absorbed is 50,130), while in Hyderabad there was a 55 percent drop in new launches, and a 22.51 percent drop in absorption, (14,760 units were absorbed). Hyderabad, of course, has been weighed down by political instability due to the splitting up of Andhra Pradesh.

T Chitty Babu, chairman and CEO of Akshaya Pvt Ltd, which has built 11.5 million sq ft of real estate space since 1998, mostly in Chennai, concurs with Knight Frank’s data: “The overall health of the state economy has contributed to a sluggish real estate market. Job creation in the city and state has actually dipped over the last five to six years.”

Babu’s back-of-the-envelope calculations say the annual job creation figures in Chennai have slid from over 1 lakh to around 60,000 to 65,000 over the last five years. He adds: “This is reflected in the absorption numbers of residential units.” A senior executive in a private sector bank agrees: “On the development front, no new great announcements were made post 2012. Hence, no new big company was setting up shop.” According to a Business Standard report, data from the department of industrial policy and promotion show that Tamil Nadu and Puducherry “together attracted $4.27 billion in FDI” between April and December 2015, compared to $3.82 billion during the 12 months from April 2014 to March 2015. This, however, is yet to translate into action on ground.

In 1995, Babu (48), who has a civil engineering degree from Sri Siddhartha Institute of Technology, in Tumkur, Karnataka, started Akshaya Structurals, and undertook contract-based construction work for developers. In 1998, Babu decided to turn developer, and started Akshaya Homes (rechristened Akshaya Pvt Ltd in 2001). “The brand [Akshaya] was not evolving while doing contract-based work,” he says. With its headquarters in Chennai, close to 85 percent of Akshaya’s overall real estate development is in the residential space, with the remaining 15 percent comprising offices and commercial spaces. Although initially focussed in Chennai, Akshaya has since moved to Coimbatore and Trichy, and is now looking to enter the Salem market. But, its home turf is where all the action is, both in terms of developments and challenges. 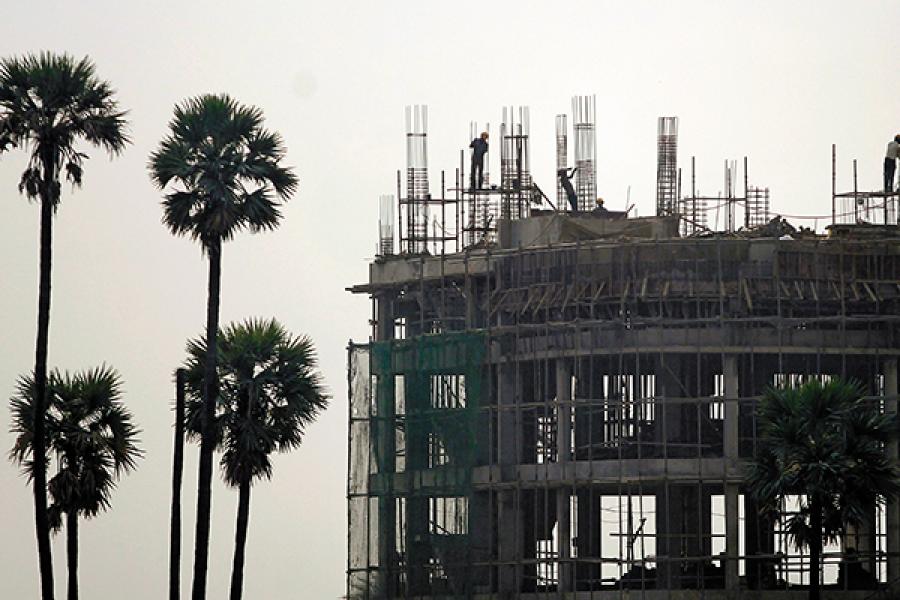 Image: Getty Images
Chennai’s real estate market has faced challenging times but, of late, there has been a sizeable increase in developer sales

Chennai’s sluggish residential real estate market is clearly putting stress on the profit and loss accounts of developers and Babu is no exception, with his company reporting a 20 to 25 percent dip in sales over the past couple of years. To counter the slowdown, Babu is doing things differently: “Initially, we never sold our commercial properties; we only rented or leased them. But now we have started selling these assets.” While he did not reveal a timeframe, he aims to sell around 1 million sq ft of commercial space, largely to private corporations, and shore up around Rs 400 crore.

Babu is also utilising some of the company’s large land assets to build gated communities where buyers can build their own homes, instead of building apartment complexes. Typically, the developer constructs all the infrastructure and amenities in the project, and buyers can either build their own home or get the developer to build it for them. “The turnaround time for these projects is much faster [about 90 days] than apartments, and it also ensures steady cash flows,” says Babu. Indians, by and large, have always had a preference to buy land as an investment option and hence demand has been buoyant.
Babu plans to sell 1.3 million sq ft of plotted developments, of which he has already sold 0.4 million sq ft.

But the slowdown is in no way giving Babu sleepless nights. The current market sentiments in Chennai are nothing but a passing cyclical trough, he says, albeit an “unusually long trough”, as one banker sums it up. “Typically, every four to five years, the market goes through a down period for about a year or so. This time around, the down period has lasted for more than two years,” says the banker.

Apart from an economic slowdown, there is a plethora of other related factors that have contributed to the sector’s dwindling fortunes. JLL India’s data show that the Chennai market has about 50,000 completed and unsold residential units. Market analysts say it will take between 18 and 20 months for this inventory to sell.

“After the global financial crisis, developers started moving away from building commercial assets to residential assets. Then, from building typical apartment dwellings of 30 units, they started expanding to 500 unit dwellings, and even started going into larger township developments of 2,000 units,” says Sarita Hunt, managing director, Chennai & Coimbatore, at JLL India. Chennai buyers traditionally prefer smaller apartment buildings, of about four storeys. Also, till 2007, state regulations didn’t allow developers to build more than nine floors. Most of the large township developments have taken place in the last five to seven years, and have predominantly been by developers from the NCR, Mumbai and Bengaluru, where highrises and developments of several hundred units are more the norm.

But while there was a steady supply, demand did not keep up. Initially, there was some appetite for the new projects, which made developers increase their prices. For a while, buyers accepted it, but after a point they refused to go along. “Prices kept going up, and buyers were not able to keep pace with that,” says Ram Chandnani, MD, transaction services, at property consultancy firm CBRE South Asia Pvt Ltd.

A phrase used frequently to describe Chennai home buyers is ‘conservative’. This means buyers do not stretch themselves beyond their planned budget. For example, in Bengaluru, if a developer offers a residential property for Rs 60 lakh, buyers are likely to buy it even if it exceeds their budget by 10 to 20 percent. This does not happen in Chennai. “In Chennai, they don’t go beyond their affordability,” says Babu, adding that the sweet spot in home prices in the city is between Rs 30 lakh and Rs 60 lakh. However, there are emerging suburban pockets where the per sq ft rate of apartments has outstripped the purchasing power of the buyer.

For instance, Chennai’s IT corridor of Old Mahabalipuram Road (OMR), where rates have risen to more than Rs 6,000 per sq ft, following land prices that have shot up from Rs 1 crore per acre to almost Rs 25 crore per acre in the past 10 years. At these rates, a 1,500 sq ft apartment would cost Rs 90 lakh (excluding taxes), and is almost 50 percent higher than what an average home buyer would prefer.

“These prices are too steep for even the IT population. Unlike Bengaluru, Chennai doesn’t have a large research and development ecosystem that offers high-paying jobs,” says Chandnani of CBRE. Also, a significant percentage of Chennai’s real estate market caters to blue collar workers from the manufacturing sector.

Babu, though, claims that rates in OMR have appreciated by only 10 to 15 percent, at best 20 percent, over the last five years. Akshaya has developed 15 projects (a mix of residential and commercial, totalling 4 million sq ft) along OMR, and is developing another 3.8 million sq ft in the region.
Of this, one project is a 38-storey luxury residence, touted to be the state’s tallest building. Each apartment is around 7,000 sq ft, and costs Rs 6.5 crore to Rs 7 crore. Despite the prevailing market sentiments, Babu claims to have sold 40 percent of the project, which consists of 31 units, in the last 24 months.

Consumer sentiments were also rumoured to have taken a beating when Chennai got flooded last December. However, Juggy Marwaha, MD, South India, JLL India, dismisses the rumours, saying the floods would become a “fading memory” among buyers, similar to what had happened after the 2004 tsunami, which caused largescale destruction to life and property along India’s eastern coast. “Land prices in the tony beach house suburb of Neelankarai had dropped by about 50 percent,” recalls M Murali, managing director, Shriram Properties. But it lasted only for six to nine months. “From that drop, land prices have gone up by six times,” he adds.

So, will last year’s floods affect real estate prices? “There is a momentary slowdown in business, not only for the real estate sector but for every other sector. Yes, people are more careful in choosing the location and are looking at more established developers,” says Babu.

Velachery was one among the worst-hit areas last December. Four months on, there are no signs of an impact on real estate. “We are negotiating a few land deals and prices have just not come down. Either it’s the same or it’s 5 percent higher,” Murali says. The story is the same in the neighbouring suburb of Pallikaranai.

“There was a glut in inventory, and that situation got further aggravated by the floods. In my view, the sales personnel of developers may be painting a picture that people are not buying because of the floods,” says Marwaha of JLL India.

While Chennai’s real estate market has faced challenging times, there seems to be an emerging silver lining. “The markets have improved in the last few months. There is a sizeable increase in developer sales. The demand, however, is skewed towards projects nearing completion,” says Mathew Joseph, member of the executive management of HDFC. He says buyers are getting good deals “as residential real estate prices have stabilised” in most locations. Results of the forthcoming state elections are expected to have a positive impact on the market as well.