'People Don't Tune In To FM Just For Music' 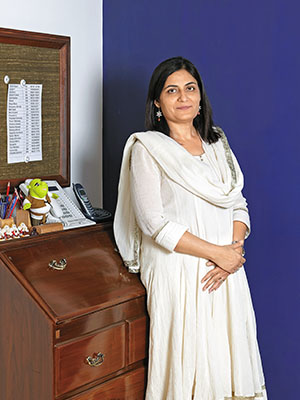 Radio City is singing the expansion tune. With an eye on the upcoming phase III of FM radio auctions, it plans to make inroads into 20 additional cities by pumping in Rs 400 crore. It already has a robust presence in 20 cities and earned Rs 180 crore in revenues last year.

The licences of all FM players in India will expire by March 2015. They will be extended by 15 years as per the rules of the latest auction. Phase I of the auction promised licences for five years, but there was no penalty on speculative bidders. As a result, many quoted exorbitant amounts, skyrocketing the overall rates. And though these players did not launch their radio stations, the highest bidding amount became the annual licencing fee for operators, resulting in irrational pricing and losses for genuine players.

To counter the problem, the government ousted speculative players in the second phase in 2005 and made it mandatory for prospective operators to pay 50 percent of the bidding amount upfront. Phase II of the auctions saw players vie for a 10-year licence by paying OTEF (one-time entry fee) and later, four percent of their annual revenues as licence fee every year. The formula for license fee stipulated that the amount should be four percent of the revenues or 2.5 percent of OTEF, whichever is higher. Radio City added 16 cities to its kitty during this phase.

Radio City was earlier jointly owned by Star TV and Radio Vaani (Mittal group). They later sold it to India Value Fund Advisors in January 2005. Apurva Purohit joined Radio City in July 2005 and is now its CEO. She was the first president of AROI (Association of Radio Operators for India). Purohit spoke to Forbes India about Radio City’s expansion plans and how it is different from the other players.

Q. Why do you need Rs 400 crore for further investment?
We require Rs 200 crore for extension of the current stations and another Rs 150 crore for bidding for new licences in phase III of the auctions. We paid Rs 120 crore in phase II and, as per the new rules, we will have to pay OTEF plus four percent of our annual revenues to the government every year. So, that figure of Rs 200 crore can go up or down by 10-15 percent. Some part of the Rs 400 crore will be raised from our promoters and bankers and the remaining from an IPO if the management and promoters feel the need for it. A KPMG report says our industry will grow by 18-20 percent in the next five years. That gives us the confidence to invest more.

Q. Where does Radio City stand today in terms of revenues?
In the 20 markets that we have a presence in, our revenue share is 26 percent. Radio Mirchi is on top with about 30 percent. Last year, our revenue was Rs 180 crore from 20 cities. In terms of profits, our margins are around 30 percent and we have grown at a 15 percent CAGR in the last three years.

Q. What gives you the confidence to invest more when the industry has not grown substantially over the last decade?
There are two things: Let’s assume that the industry does not grow fast enough and regulations don’t change. We are still sitting pretty; we are profitable and debt-free. Even if nothing happens, we are still the second-largest player in the market.

In the first half of this year, we have grown at 28 percent compared to eight percent last year. That gives us the confidence to invest more. We grew at 18 percent CAGR year before last; by the end of the year, we estimate to grow at 25 percent.

Q. Is internet radio a threat to your business? The cost of setting it up is very little and broadband prices are falling too.
People don’t tune in to FM just for music. They also hear it for the local information provided by radio jockeys. Only a local FM station set up in, say, Mumbai, Bangalore or Delhi will be able to give you information on traffic, weather, news, festivals, shopping deals or emergencies. Local news and information provided by FM channels is the reason why people tune in. The core reason to switch on to FM is music, but the key differentiator is localisation.

Q. How do you differentiate yourself?
One is the kind of music. Ours is more for the older audience instead of the latest, loud songs. We play new songs after a month or two, only after they have caught the fancy of the people. Our audience is more in the 25-45 age group. Our research across seven cities revealed that though they liked the songs we played, our listeners wanted the latest city news, inspirational quotes, tips and tricks, etc. People want to be slightly ahead of their peers at water cooler conversations, so they want the latest local news or information from us instead of national or international news.

Q. Many players have a strategy of focusing on audience based on advertiser targets. Some have decided to go hyper-local. What does your hypothesis say?
I have been hearing about the small-town growth boom, but it hasn’t happened in the past 25 years. The rural areas don’t bring the biggest chunk of revenues in our industry. A KPMG report suggests that till 2019, the top 40 cities will contribute 60-70 percent of advertising revenues. Small towns are growing, but it will take 10-15 years for them to be profitable. Phase III is attempting to do that by setting up a network cluster in C and D towns and then allowing us to broadcast the same content to adjacent territories. For instance, we have a station in Ahmednagar, Maharashtra, from where we can broadcast the channel to Nanded, Jalgaon, Sangli, etc and six other cities in the state. That is a very profitable network for us as I can consolidate the cost of RJs and setting up of a studio to just one town and still beam to six. In Phase III, we can broadcast from A to D towns; it was only C to D earlier.

Q. What are the key challenges of the industry?
Regulation is the biggest challenge. We aren’t allowed to expand without going through auctions. We can’t open new channels unless we get licences whereas other media players—digital or TV—are growing fast. There are content restrictions, like we cannot do political news. We can’t have a bouquet or niche channels because there is limited frequency in each city.

Hopefully, with phase III, the industry will grow to Rs 2,000 crore from the current Rs 1,200 crore for FM players.

Buying digital rights for internet channels is another headache.

We have to do special deals because music labels put several restrictions on how we can play their music on a digital platform. In India, music labels still don’t understand digital as a medium. Some of them ask for exorbitant rates like Rs 50 crore for all their labels put together when our revenue from digital is not even Rs 5 crore. Some will give you semi-interactive rights. The music industry never understood radio earlier, so the battle for music rights and cost of airing went on for 10 years. The industry suffered a lot because of this.

Q. The majority of our nation is younger and not necessarily in your target group. Does that mean you have to sacrifice the listenership audience and advertising revenues or has this strategy been adopted because more advertisers are targeting this target group?
No, we are not sacrificing the numbers. The two biggest chunks of audiences are in the age group 18 to 25 and 25 to 44. We are there in between. We do get a broad listenership. For instance, in Mumbai, we have been number 1 for the last 200 weeks.

It’s a brand call we have taken to focus on this target group, the selection of the markets and the type of music we play. You have to decide how you will increase your footprint. Look at Big FM or Red FM, who are in 45 markets and twice our footprint. Still their revenues are lesser than us. We are in the top 20 metros and decided against going to smaller towns, yet we cover 60 percent of the total market.

Within the radio space, we are able to give high-yield earning audience to our advertisers, and in future, too, when we expand, we believe there are still towns unexplored that can give better revenues.

Q. What is your digital / internet radio offering. How much do you make from it?
On the digital platform, we have launched 13 channels by now. We are offering genres such as  devotional, rock band, freedom radio (500 artistes tied up on this), and in languages like Tamil, Malayalam etc. At present, 12 percent of our revenue is from non-FCT (free commercial time), of which 4 percent is from digital. So it’s very small right now. Non-FCT is events plus digital. But I think that’s the future. We launched Radio City Tamil, and, in one month, its listenership crossed Radio City digital Hindi.