For almost 10 years, K-8 learning company XSeed has been working at transforming primary school education in India through step-by-step lesson plans for teachers and students 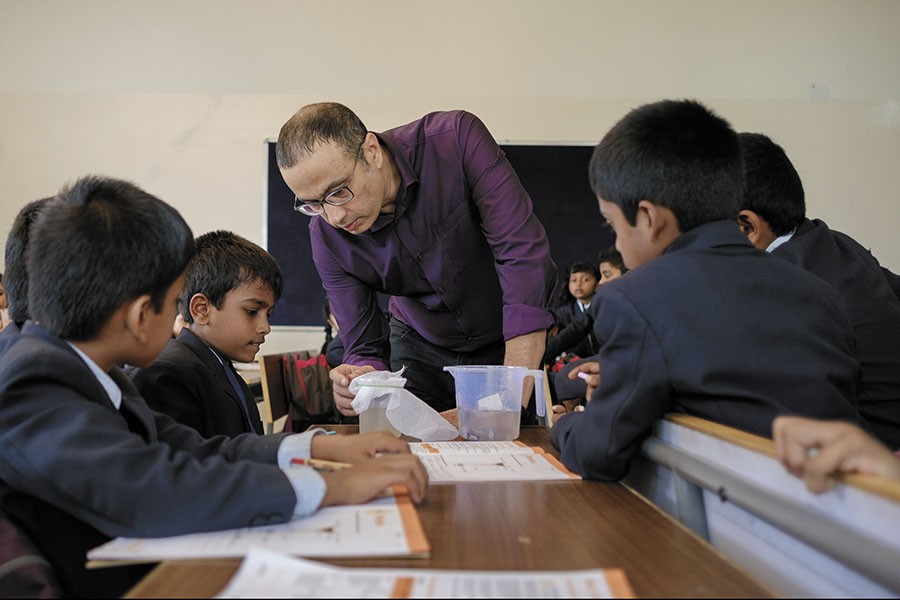 The teacher’s voice rings out across the classroom. “Settle down,” she says, and promptly the Class 6 students scuttle to their wooden desks. The middle-aged Farida Mun, or “Farida ma’am”, dressed in a printed pink rida, turns to her table where a large bowl of water stands. One at a time she takes three stones—large, medium and small—and drops them into the water. “Observe what happens,” she instructs the class. Eleven-year-old Hasan, who has been sitting towards the rear end, swinging his legs back and forth, jumps out of his seat to look at what Mun is doing.

“So what did y’all see?” Mun asks after completing the experiment. The class erupts. Almost everyone’s hands go up, desperately flagging them in the air to attract the teacher’s attention. “The big stone made the biggest splash,” shouts Hasan when Mun points towards him. “Yes, the small pebble only made a tiny splash,” observes another student. “That’s because the weight of the big stone is more,” says a third. Tactfully Mun directs the discussion, getting the children to conclude that more the weight—or the “mass”—of the stone, greater is the “force” exerted, leading to a bigger splash.

It’s easy to mistake Hasanat High School for an upmarket institute following the international baccalaureate system. But, in reality, it’s a middle-income community school in Mumbai’s suburb of Andheri, which follows the regular ICSE curriculum. Yet, far from the traditional “chalk and talk” manner of teaching, which is common in Central and state board schools, Hasanat holds out a different promise. Here critical thinking trumps rote learning, creativity is encouraged not curbed, and teachers are unafraid. Unafraid to experiment, let students lead discussions and, importantly, ask questions. Their confidence—like that seen in Mun—is in large part courtesy XSeed.

A Singapore- and Bengaluru-headquartered for-profit social enterprise, XSeed Education Private Limited has quietly become a force in elementary and primary education in India. After it was set up in 2008, the K-8 learning company has been providing schools with the tools and techniques needed to deliver a ‘five step child-centred learning process’ that helps bring to life the magic seen in Mun’s class. Over one million children from more than 3,000 low- to middle-income schools across India, Nepal, Bhutan, the Middle East and the Philippines are benefitting from XSeed. (The company did not give country-wise breakups).

There’s a core quality challenge in schools today,” says Ashish Rajpal, the tall, bespectacled founder and CEO of XSeed. This is more so in government-run schools, but also in low- and middle-income private schools where a lack of trained teachers, poor infrastructure and high student-teacher ratios result in modest learning outcomes. It’s these English-speaking, non-elite private schools that XSeed targets, says Rajpal.

The 48-year-old quit his corporate career as the worldwide head of marketing at French food giant Danone in Paris to pursue his passion for education. “I’m at the outset of my third life. In my first life I did what most middle-class chappies do—I did my MBA and got a job,” he says, settling in with a cup of coffee at a hotel in Worli, South Mumbai. Rajpal grew up in Delhi, and after graduating from XLRI in Jamshedpur, marketed goods for P&G in Mumbai, sold beer in Russia and finally got headhunted by Danone. The birth of his first child was the “trigger” to his interest in children. “That’s when the bug of wanting to do something with kids bit me,” he says. After three years in Paris, Rajpal got admitted to the Harvard Graduate School of Education and, against all good advice, stalled his successful career to go after his “second life”.

When Rajpal returned to Delhi in 2002, he was fired up with idealism. However, it bordered on naivete. “We thought that we’ll lick the whole problem of education in India in five years,” he says sheepishly, referring to his Harvard classmate Anustup Nayak, whom he roped in for the endeavour (Nayak now leads talent acquisition at XSeed). Since teachers were poorly trained, they believed that a great teacher-training programme would solve the problem. Together, they built out “sexy” three-, five- and eight-day training programmes that focussed on fostering creativity and inquiry over rote. But six months on when Rajpal and his partner visited those schools, they found that everything had gone back to the way it was.

“We didn’t see it at that time. But whoever learnt anything in a training programme?” concedes Rajpal. “You learn by doing and making mistakes.” It had been four years since his return to India, and he had eaten into his savings. In desperation, he took to teaching science to Class 4 students at a friend’s school in Delhi. “That’s when I had my epiphany. The job of teaching is really hard,” he says. “It’s the 40-40-40 saying: 40 kids in 40 degrees centigrade for 40 minutes. That’s what I was doing—teaching like a traditional teacher despite my education in education.”

With a renewed sense of purpose—and direction—Rajpal went back to the drawing board. He realised that in order for a “Farida m’am” to teach something like “force” in a 40-40-40 environment, a step-by-step process had to be devised; one that would tell a teacher exactly how to begin a class, what activities to conduct, what questions to ask, how to get students to lead the learning and how to test their understanding.

And so XSeed’s ‘five-step child-centred learning process’ was born. For every lesson, this takes the form of an ‘Aim’, such that no class starts without the teacher and students knowing what the lesson is about; an ‘Activity’ to introduce the concept like Mun did; followed by ‘Analysis’ to reflect on the activity; ‘Application’ to ensure there is rigour to the learning, and finally an ‘Assessment’ to ensure that the students are actually learning. Rajpal and his team—now 300 in number, working out of offices in Bengaluru, Gurgaon and Singapore—spent a year taking every lesson in the CBSE and ICSE K-8 classes in English, Math, Science, Social Studies and Hindi, and recreating it based on this five-step model.

“It’s a complete academic solution for schools,” says Mukund Krishnaswami, co-founder and partner at Lighthouse Funds, a New York- and Mumbai-based venture shop that invested $10 million in XSeed in 2010. That solution entails step-by-step lesson plans for teachers including year-round classroom-based teacher training, as well as application-oriented textbooks and assessment sheets for students. These textbooks and learning materials, published by XSeed, replace the regular textbooks. In turn, students pay amounts ranging from ₹800 to ₹3,000 per year as part of their school fees. This self-sustaining business model helped XSeed turn profitable 18 months ago, says Rajpal, declining to let in on the revenues.

“I have been in XSeed classrooms across the country and have witnessed the benefits of the programme, seen in the children’s enhanced curiosity, confidence and thinking skills,” says Nicholas Cator, executive director at Belgium-based Verlinvest, another venture capital firm that put in an undisclosed amount in XSeed in 2016.

But does the approach help teachers achieve their formal lesson goals? After all we’re still a results-driven society. According to Rajpal, XSeed children score 20 percent more in comprehension, problem-solving and communication. “That’s a significant difference,” he says.

Moreover, where XSeed scores is in working with a school’s existing resources. Unlike technology-focussed solutions like Byju’s or Sal Khan’s tutorials, XSeed draws on the existing teachers, syllabus and classroom infrastructure, and avoids putting further strains on schools already coping with myriad difficulties, from a lack of funds to high teacher turnover. “This makes XSeed’s solution very scalable across schools, not just in India, but throughout the developing world,” says Krishnaswami. XSeed went from 30 schools in the first year, to 100 in the second, 400 in the third; it is currently used in 3,000 schools.

Even so, challenges remain. Behlah Badri, principal of Hasanat High School, while generally pleased with the programme, talks of the resistance among teachers to adopt it. They’ve been using XSeed across classes 2 to 7 in English and Science for the last four years. Due to the resistance, the programme is sometimes not “used with fidelity”, he says, that is, the lesson plans and materials are not used in the way they should be. If they were, there would be a “remarkable difference” between XSeed and non-XSeed classrooms, he adds. He would also like to see XSeed lesson plans being available across all subjects so as to make it a more “complete programme”. “We’ve seen that XSeed takes our feedback very seriously,” says Badri. Rajpal, for his part, is working on including other subjects into the XSeed fold.

Today, almost 10 years on, XSeed has touched thousands of children in India alone, where 250 million are school-going. “That’s just a fraction of the journey,” says Rajpal, not in jest but in right earnest. He’s still an idealist, albeit a more pragmatic one.