A musician-turned-entrepreneur's plan to save creators from advertising

You no longer need to be rich to be an arts benefactor. But can crowdfunding site Patreon save creators from the starvation wages of online advertising? 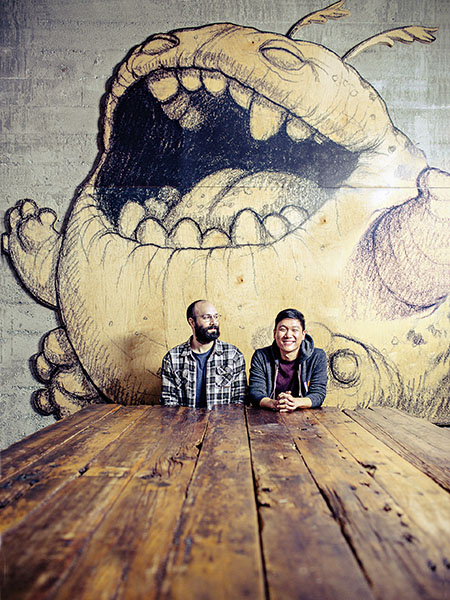 Patreon co-founders Jack Conte (left) and Sam Yam watched the internet destroy the business models that supported scores of content creators. They say their technology can be part of the solution
Image: Timothy Archibald for Forbes

It’s 10 pm on a Sunday in November at California’s Burbank Airport, and Jack Conte, the typically beaming, bearded half of the husband-and-wife musical duo Pomplamoose, is leaning back in a chair, his hoodie pulled over his head, trying to get some rest. Conte, 33, spent much of the weekend in Los Angeles jamming with his funk band, Scary Pockets, and now it’s time to return to San Francisco for an entirely different type of gig: His day job running Patreon, a website and mobile app where fans pay monthly subscriptions to support their favourite creators, from painters to podcasters, singers, dancers, writers, game designers and photographers.

The moment perfectly captures what Conte lightheartedly calls his “identity crisis”: Being CEO and founder of a 100-person startup (valued in September at an estimated $400 million) without completely giving up on his passion for music, which is what led him to invent Patreon in the first place. “A lot of creators depend on us being a high-performance team,” Conte says. “That’s the most important thing in the world to me, so there’s less time for music.”

Conte’s dedication stems from a conviction that Patreon can save content creators from having to survive on digital advertising—an all but impossible task for most—or resort to one-time campaigns on sites like Kickstarter and Indiegogo. The company is built on a counterintuitive bet that fans are willing—even eager—to pay monthly subscriptions for content that they could get for free as long as it helps support their favourite artists and it’s easy to do. There’s reason to believe he’s right. More than a million Patreon users are helping provide some 50,000 artists with a predictable monthly paycheck. “On Kickstarter and Indiegogo, creators essentially have to start over every time,” says Danny Rimer, a partner at Index Ventures who is a Patreon investor and board member. “It’s the same reason software companies went from licenced software to subscriptions: Predictable revenue and better service for customers.”

Since Conte started Patreon four years ago with his Stanford University roommate Sam Yam, 33, who is CTO, the company has paid out more than $250 million to its artists—$150 million in 2017 alone. Patreon’s traction is fuelled by a simple pledging system and the direct line it opens between artists and fans, or “patrons”, who get access to perks like live Q&As or exclusive chats with the artists, and casual behind-the-scenes footage. It also doesn’t hurt that being altruistic makes people feel good. In other words, Conte didn’t need to change human nature to get Patreon to work.

While Patreon is no longer the only player in its category (Kickstarter launched a competitor called Drip in November), it is the largest—and it’s growing faster than ever. The number of patrons and creators and the amount pledged are all doubling yearly. Now Patreon is using some of the more-than-$100 million it has raised from investors, which include Joshua Kushner’s Thrive Capital and Freestyle Capital, to double its headcount over the next year.

By some measures Patreon’s success defies logic. The average user pledges $12 per month, more than the cost of a basic subscription to Spotify or Netflix, which offers access to immense catalogues of video and music. (Some users pledge per piece.) Dozens of artists make more than $30,000 per month, including video reviewer Blind Wave and a capella singer Peter Hollens, who made about $400,000 on the site last year.

Patreon accepts only US dollars, yet 40% of patrons are outside the US

From the start, Patreon has taken a 5 percent cut of each pledge. That’s the same cut taken by Kickstarter and Indiegogo but far less than revenue-sharing programmes on YouTube and Apple iTunes, which keep 45 percent and 30 percent, respectively. “The mission is to send as much money to creators as possible,” Conte says. The commissions generated an estimated $8 million in revenue last year.

Pledgers sign up for “tiers”, generally ranging from $1 to $10—though some pay much more—for access to the artists’ perks. Ukulele performer Cynthia Lin, who offers fans live lessons, derives about half her income from Patreon and grew her fan base from 400 to 1,400 in the past year. With video “sketchbook tours” and chats, Chilean illustrator Fran Meneses pockets more than $4,000 per month, which supplements income from her Etsy shop and Instagram presence.

Creators join Patreon for free and don’t have to promise exclusivity. The site offers them instructions on how to use it most effectively. It also provides a growing list of back-office tools such as analytics and email management to help creators run membership campaigns modelled on those of NPR stations. For now, Patreon is designed for creators who already have established followings but aren’t household names. Long term, Conte hopes to help fund bigger names and prove that technology can help restore the financial underpinnings for content creators that the internet has largely eroded.

Patreon’s artists-first ethos may be lucrative for some, but it comes with pitfalls, especially in a world where digital business models change frequently. “Creators need to diversify their incomes as much as possible so the rug can’t be pulled out from under them,” says Laura Chernikoff, executive director of the Internet Creators Guild.

For Conte, the mission is personal. He grew up in bohemian-chic Marin County, just north of San Francisco, and was hooked on music from the age of six, when his father taught him the blues scale. While studying music and composition at Stanford, he started making YouTube videos with his then girlfriend, Nataly Knutsen, in 2007. (The two married in 2016.) In 2013, he drained his savings account, maxed out two credit cards and spent three months making an electronic music video, complete with robots and a replica of the Millennium Falcon cockpit. His fans loved the video, which got more than a million YouTube views in its first year. However, Conte pocketed just $54 from ad revenue over the video’s first month. To date, it has generated about $1,000. Not including Conte’s time, it had cost more than $10,000 to make. “It was this rock-bottom moment for me as a creator,” Conte says. He knew he’d created something of value but would never be paid for it. “That discrepancy led directly to the formation of Patreon,” he adds.

Conte discussed his idea with Yam, who programmed the site in months. It went live in May 2013, and within minutes more than 100 fans were pledging upwards of $700 a month to support Conte’s work. Within months Patreon had investors.

Conte is now eyeing a number of opportunities for growth. First is overseas expansion: The site is in English and takes only US dollars, yet 40 percent of patrons are outside the US. Farther out are somewhat fuzzy notions of turning Patreon into a provider of small-business services, including ticketing and merchandising, to help artists turn their passions into professions. “Artists don’t have to starve any more,” Conte says.

Tweets by @forbes_india
A desk away from the office: Why India Inc is checking into co-working spaces
For new-age real estate startups, it's not about listing properties anymore