For new-age real estate startups, it's not about listing properties anymore 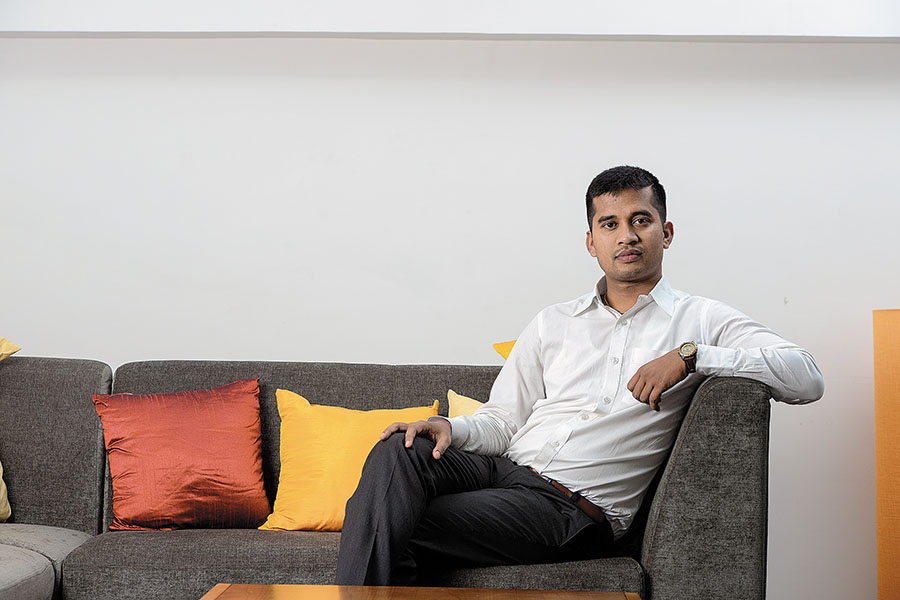 Amarendra Sahu, co-founder and CEO of NestAway, says drawing flak is part of the startup’s growing up journey
Image: Bmaximage

The 30-odd social media and customer service executives at the Bengaluru headquarters of NestAway Technologies Pvt Ltd, a managed-home rental startup, are a battle-hardened lot, firefighting with irate tenants berating NestAway for myriad reasons on online platforms, almost every day. Customers could be angry about a plumber turning up a day late, or the internet running slow. At times, the company is accused of wrongfully deducting money from the initial deposit at the time of vacating the house.

Amarendra Sahu, 35, co-founder and CEO of NestAway, which was started in 2015, is unflinching in the face of such backlash. He notes that drawing flak is part of the startup’s “growing up journey”. “Of course, we get tonnes of brickbats. We do real world stuff and you get hit in the real world. So, there will be broken pieces, but we have the intention of fixing the anomalies. Customers are not dealing with a cheat here,” says Sahu. “How it starts is not necessarily how it ends. If we can create trust at scale, the model starts working. We will have to learn the hard way because there is operational intensity.” 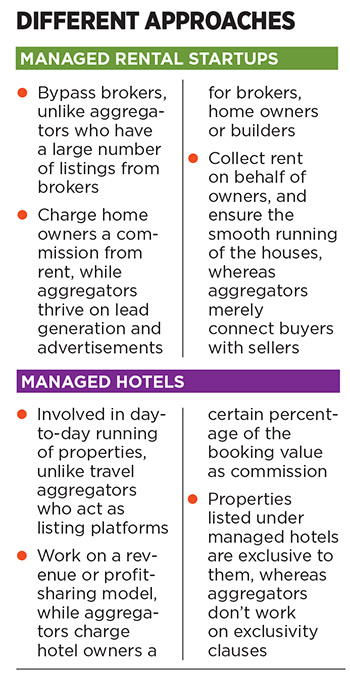 The “model” that Sahu refers to is relatively new in India. NestAway, and the likes of Homigo, Homer, Stanza Living and StayAbode, are among startups that have mushroomed in the last three years, trying to break into the online home rental market, which has remained a stranglehold of brokers and, to some extent, classified ad platforms. But unlike their predecessors, such as 99acres, MagicBricks, Quikr, Commonfloor (acquired by Quikr in 2016) and Housing (acquired by PropTiger in 2017), these newbies don’t stop at simply listing properties for rent or sale and connecting customers with brokers, home owners or builders; they go a step further, get their hands dirty and manage the properties they list. In return, they collect rent from tenants and pass it on to owners, after deducting a commission every month.

At the heart of these operationally intensive businesses, which also makes them susceptible to brickbats, is a quest to improve customer experience. “The very reason for our existence is to provide a great experience to the customers at an affordable price. It is hard to believe that you can deliver on that objective without getting deeply involved with the physical real estate,” says Sahu, who believes this will gradually coax consumers to trust the NestAway brand. “Creating trust is hard. It is donkey work. The good news is, when consumers trust you, they open their homes.” NestAway has so far worked with 20,000 individual home owners and 40,000 tenants, across eight cities.

Industry experts believe that Sahu has a case. Online platforms for classified ads, whose birth almost coincides with the advent of internet in India, add great value in discovery and dissemination of information by aggregating lakhs of listings; but unfortunately, their job ends there, often leading to poor customer experience, raw deals from brokers, home owners and builders. Managed rental startups have standardised offers: Houses are of a certain size, beds and linen of a particular quality, essentials such as TV, washing machine, fridge and internet are in place. These make them convenient for tenants, especially young professionals who have moved cities.

“Consumers want a standardised offering that is associated with a brand,” says Sonu Abhinandan, vice president and business head at QuikrHomes. Quikr is one of the few classifieds portals to focus on managed homes. It believes managed rentals, coupled with listings for rent and sale or purchase of properties, help it offer a complete real estate solution to consumers. Quikr bought managed rental startup GrabHouse in 2016 for about $10 million, to enter this segment. “When customers are associating with a brand, there is a much higher expectation than when they are negotiating directly with the landlord. We have a huge responsibility to match that expectation, else the business does not grow.” 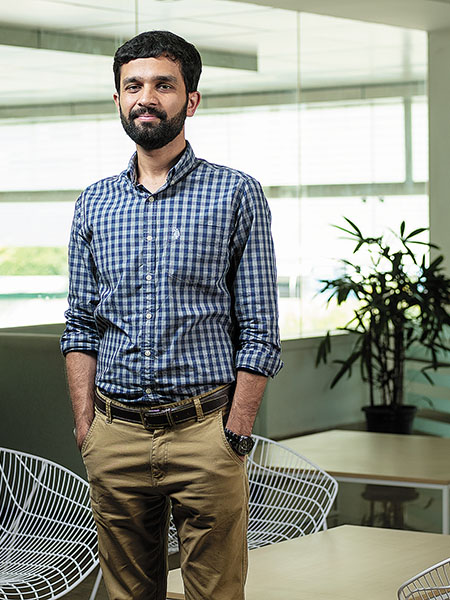 Going the extra distance has found believers among investors as well. NestAway has so far raised $94 million—including $51 million from Goldman Sachs and Ratan Tata’s UC-RNT this January—from investors such as Tiger Global Management and IDG Venture Partners. According to Tracxn, a startup tracker, 52 managed rental startups were founded in India between 2015 and 2017, as against 122 aggregators. However, while the aggregators together got $52 million in investments, managed rental startups procured $120 million in venture capital funding.

“The managed services startups have a path to scale. They will not have an existential issue beyond a certain scale, as they will have the cushion of a regular cash flow coming in. You need not grow sharply on topline, but if your margin construct is good, the business looks good as well,” says Vinod Murali, managing partner at Alteria Capital, a venture debt firm.

Managing properties and offering customers a predictably better experience—thereby garnering a loyal customer base—is something that startups in the hospitality industry are taking up as well. Well-funded startups such as OYO and Treebo have now started managing hotels too. This is a far cry from aggregators such as MakeMyTrip, Ibibo Group (the India business of which was acquired by MakeMyTrip in 2016), Yatra or Cleartrip, which are credited with introducing Indians to the world of online travel bookings.

Exercising some control over the quality of listed properties is something that global aggregators too are adopting. Earlier this year, Airbnb announced the launch of Airbnb Plus, which offers customers a hotel-like experience; accommodations listed under this category will adhere to a 100-point quality checklist.

“To truly add value to both the supply and demand sides, you need to go deeper into the stack, and do things on the ground to solve problems that have conventionally come in the way of a good experience for the consumer,” says Siddharth Gupta, co-founder and chief executive at Treebo, which got $57 million in venture capital funding from SAIF Partners, Matrix Partners, Ward Ferry Management and Karst Peak Capital.

Treebo operates three models: Franchises, where the hotel’s staff run the show and stick to certain service standards under Treebo’s close supervision; managed models, a fairly nascent segment with five properties, where Treebo deploys its own staff; ‘manchised’ properties where a combination of the franchise and managed models are used, with Treebo appointing a company executive as the hotel manager. The company aims to have a total of 1,500 properties under all three categories—up from the current 400—over the next 12 to 18 months; about 80 percent of these will be under the ‘manchised’ model.

Gupta and his team initially struggled to convince hotel owners to partner with them and give Treebo control of the hotel’s entire inventory. “When we started approaching the first set of hotel owners in early 2015, there was a lot of resistance. I remember being promptly asked to leave, without even being offered a cup of tea, once the owners learnt that we wanted full inventory,” he recalls.

But, the pain is worth it, says Maninder Gulati, chief strategy officer at OYO, India’s largest hotel startup, if companies want to have a firm grip over customer service.  OYO, in its earliest avatar as Oravel in 2012, operated as an aggregator before founder and CEO Ritesh Agarwal decided to change tracks. Today, OYO, which has so far raised about $450 million from SoftBank, Lightspeed Venture Partners, China Lodging Group and Sunil Munjal’s Hero Enterprise, straddles all business models—franchise, managed and ‘manchise’. It expects the managed and manchised models to account for 20-25 percent of its inventory in the next five years.

All the optimism aside, Gulati, who had earlier invested in OYO while working with Lightspeed Venture Partners, admits that scaling the managed model will take a lot of time and money: “The capabilities one needs to build at the backend become critical. You need to have extensive recruitment, training and operating capabilities. Initially, it will be pretty expensive to do all of these things.”

“This is not something that you can learn in three to six months. It will take you at least three years to get everything right. While investors and entrepreneurs know this is the right thing to do, it is not the easiest thing to do,” he adds.

Entrepreneurs, it seems, have taken a liking to the “right thing”, at least for now.