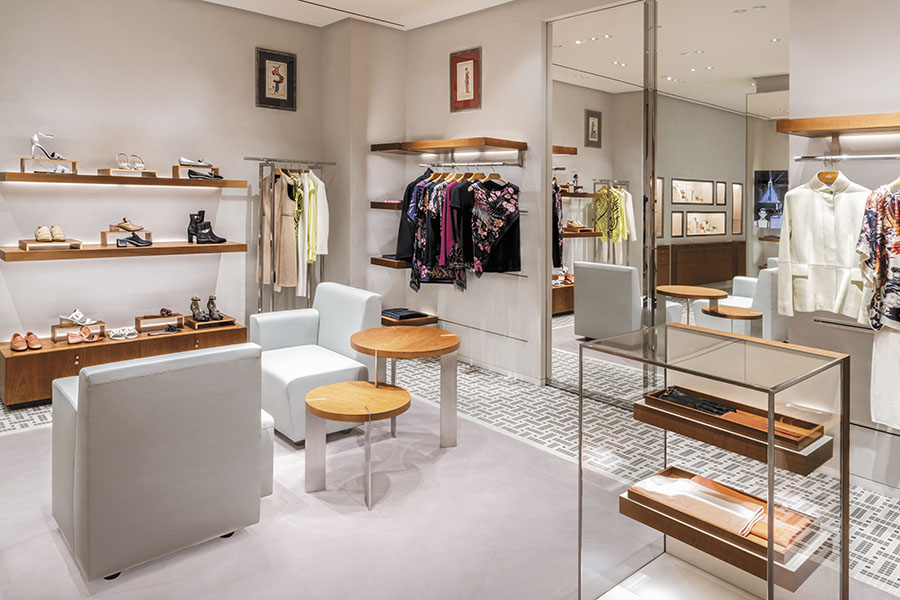 A Hermès store in Delhi. In-store ambience has been a defining feature of luxury retail
Image: Fabien Charuau

Traditionally, luxury goods came with pedigree, an exclusive in-store ambience accompanied by personalised service, and a very high price tag at a physical store located in a tony part of the city. However, if that address is post-scripted with a dotcom, the luxury brand would be sharing part of its address with all retailers, luxury or mass—for example with Walmart.com—stripping it of all exclusivity, and denying customers a unique shopping experience that justifies the price tag.

And yet, as global events lead to slowing sales growth, the changing order of things is dictating that luxury gets an online address. While US economic growth over the last few years did sustain luxury sales, security threats in Europe led to lower passenger traffic and correspondingly, lower sales at regional airports and retail stores. Further, saturation of stores in China and declining Chinese spending on luxury goods, due to the government’s anti-corruption drive, added to the slowdown. So there was jubilation when, after an entire year of stagnating sales in 2016, the global personal luxury goods market—high-end handbags, shoes and jewellery—showed growth of about 6 percent in 2017.

Adding to the general uncertainty are changing consumer lifestyles and expectations of existing consumers, dictated by a digital way of life. The wealthier customers have started shopping online, enjoying the luxury of ordering at their convenience, from a vast selection of merchandise and having it delivered to their doorstep in a day or two. Chinese consumers who fuelled a large part of the luxury industry’s growth in the past also sobered up in their tastes by shunning big logos and ostentation, and felt comfortable mixing luxury with fast fashion.

Finally, the newcomers to luxury, i.e. the millennials, now account for a larger share of premium goods sales. They are fickle, jump from brand to brand, and think nothing of participating in the shared economy by renting a designer outfit for a day from renttherunway.com. 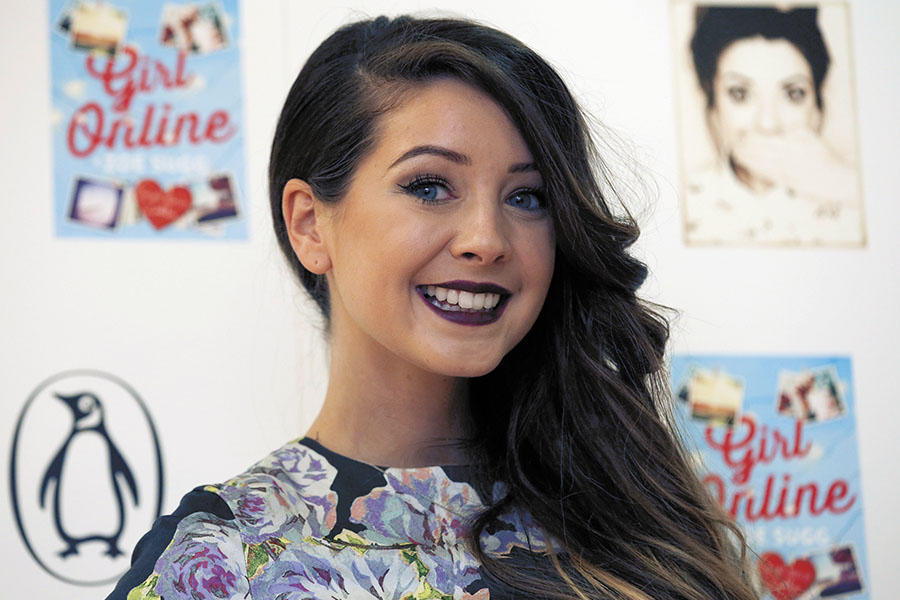 British vlogger Zoella has 10 million subscribers for her video blog. Brands can partner social media influencers like her to lower their advertising and marketing costs
Image: Luke Macgregor / Reuters

And if this wasn’t enough to muddy the waters, all of these categories of consumers seem to want a brand that is relevant to their lifestyles. They want a contemporary brand that aligns with their values, and they are equally happy to shop from their mobile phones as from a physical store.

So, many of the paradigms that define luxe retail—the service, the seasons, the physical runway, the in-store ambience—suddenly seem less engaging, as digital immersion happens. In addition, customers look for a complete experience, where a luxury label can clearly show its commitment to the environment, human rights and wellness and perhaps justify its high pricing, with technology as the centrepiece. While only a fraction of luxury sales happens online today, more than half of all buying decisions are influenced by online engagement.

It has, however, taken luxe brands quite a while to start thinking strategically about how to mingle with the masses while retaining their premium persona. In 2015, at Georgetown University’s Global Luxury Summit, Gildo Zegna, CEO of Italian luxury fashion house Ermenegildo Zegna, spoke of the need to better develop an omni-channel presence to serve the half-million Zegna customers across 100 countries better, and faster. And while product and industry was important, data was key, which in turn required technology that the luxury industry was not adept at harnessing, as yet.

And this is where Zegna is a big corporate success: Its global sales amount to $1.3 billion per annum across 500 stores, and it is vertically integrated from sheep farms in Australia to retail outlets and, with its websites, computer screens too! 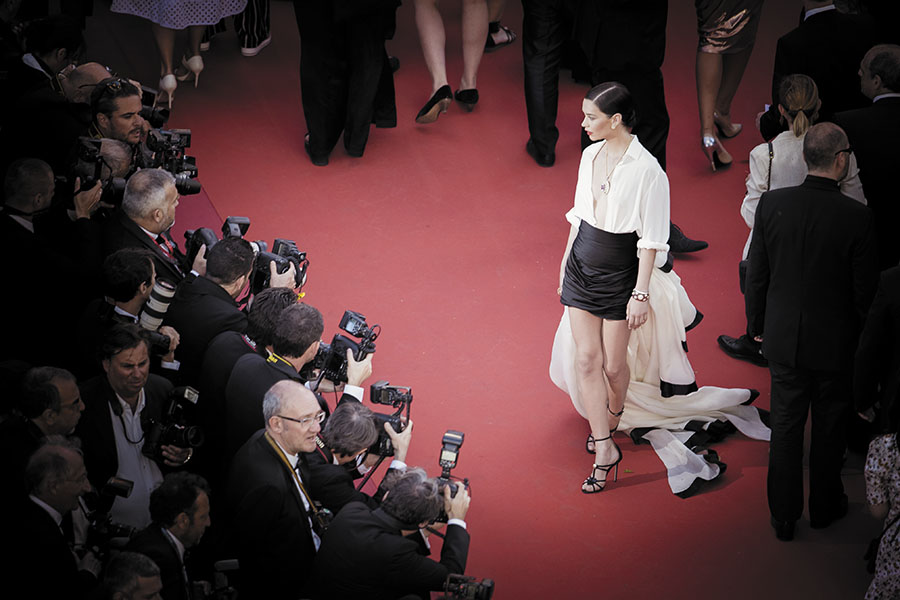 Amanda Steele, who has 2.8 million followers for her vlog, was flown down to Cannes in 2017, dressed and made up by Christian Dior
Image: Francois Durand / Getty Images
The magnitude of the changes technology has wrought on luxury retail, and how to deal with it, was the subject at Wharton School’s Baker Retailing Center, which held a conference in 2015 on online luxury retailing for academics and retail executives. Not surprisingly, it pointed out that the sensory experience and ‘social distance’— ‘I’m better than you’—that are core features of luxury products can be difficult to deliver online. Using technology to connect with this new genre of digitally connected, shared-economy consumers is at the core of the dilemma luxury brands face today.

Speaking at the Georgetown event, John Idol, the CEO of Michael Kors, mentioned the American luxury company had 700 stores worldwide and 4,000 points of distribution and needed to understand how to harness big data to communicate with customers. Despite all the talk, it was only when the personal luxury goods market flat-lined in 2016—with sales at €249 billion, compared with €251 billion in 2015 —that it forced a rethink among luxury brands.

In 2017, as a result of price rationalisation between Europe and a traditionally more expensive Asia, as well as merchandising streetwear for younger customers, the personal luxury goods market reached €262 billion, according to Bain & Co and is estimated to grow to €295 billion by 2020. This bouncing back of growth illustrates the potential that changing the formula holds for the industry, even as it forecasts online sales to reach 25 percent of all sales by 2025, up from 9 percent at present.

Ironically, the internet has lowered advertising and marketing barriers, not just between luxury and mass brands, but between competing luxury brands as well. Newcomers to the luxe business, such as high-end jewellery and exotic skin handbag brand Kara Ross, in the absence of large budgets, are building the brand online and working with influencers or social media leaders who carry enough authenticity to guide and validate purchase behaviour among their online followers.

Social media influencers can include the likes of Traackr, a management platform that could just as well have luxury clients as an Amazon.com, or Zoella, a British beauty vlogger who reportedly has 10 million subscribers for her video blog, earns up to £50,000 per month, and has launched her own range of beauty products. Or, there is the example of Amanda Steele, a 17-year-old beauty vlogger, who shared pictures of herself with Hollywood celebrities at Cannes this year with her 2.8 million followers, with the caption, ‘Thank you sooooo much @diormakeup for treating me like a princess!!’. Steele was flown down to the event, dressed and made up by Christian Dior.

These examples underline the fact that having an online presence demands authenticity from luxury brands. Antoine Arnault, CEO of LVMH-owned Berluti, says the industry’s competitive edge is now won by “transparency in communicating”. The generation of customers that demand this transparency is important, since more than 85 percent of the luxury growth in 2017 was fuelled by millenials and Generation Z (generally those born in 1995 or later).

In the past, luxury was a way of life for the royals of India and Europe. Today, wealthy older customers are cutting down on conspicuous consumption as they work towards leaving a sustainable planet for the next generation. At the same time, millennials are seeking to make a personal statement through luxury casual wear items like T-shirts, denims, jackets and sneakers.

Both categories of consumers are consuming luxury in keeping with the shared values of sustainability, and expect brands to align with their interests.

Some key first movers that understood this are Burberry, which has, over the years, collaborated with Snapchat and Google, and various musicians, all of which have helped rejuvenate the brand. Chanel has been creating great video content on YouTube with Karl Lagerfeld, which has helped the brand stay relevant. Hermès has an amazing site that has quirky features with ties, scarves and jewellery playing at puppet theatre and wordplay; for instance, they create words like ‘meandmyselfomania’, which is defined as a noun describing self-love to the point of idolising one’s double. All of this seeks to engage with consumers and carry them along the journey of discovering their brands online.

Engagement can take other forms too. For example, robots taking away jobs from people is perceived to be a threat. Luxury brands can help their clients relate better to them by talking of how they still employ local craftspeople for manufacturing. In Trivero, near Milan, 150 artisans work at a Zegna factory. If Zegna were to talk about this story and have an online contest where winners were taken to this factory, what a terrific way it would be of aligning the brand values with those of today’s consumers.

When the Hermès website describes the process of stitching or sewing, illustrating or imagining the Hermès silk that goes into the scarves, it is a revival of traditional skills. When a Stella McCartney uses her sustainable luxury line of clothing—animal leather-free—to partner with mass merchandiser, Target, she’s addressing consumer concerns of affordable luxury that also does not use animal skins. That means, apart from developing online strategies that help them retain their luxury image, brands have started fashioning their marketing strategy with the expectations of new customers.

Meanwhile, Prada rolled out its first online store in China in December-end and LVMH, in June last year, launched a new website 24sevres.com—named after the well-known address of its department store at 24 rue de Sèvres in Paris.

Namita Jain is a strategy consultant