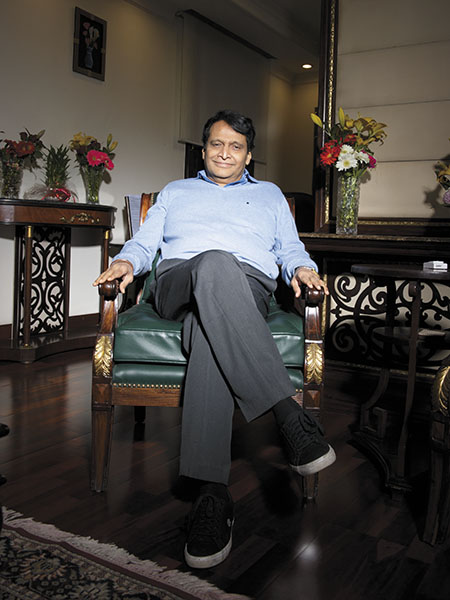 Suresh Prabhu says the fundamentals of Indian economy are getting stronger every day
Image: Amit Verma


For a little over four months, Suresh Prabhu has been working round the clock, meeting India’s corporate doyen, to chart out a path for the sinking manufacturing sector. The commerce and industry minister, who took charge last September, has had an eventful few months: India’s exports grew by a record 30 percent in November, he flew to Buenos Aires and stood firm by India’s demands at the inter-ministerial talks of the World Trade Organization. His ministry is now in the process of identifying between six and seven new sectors to boost manufacturing over the next decade.

PM Narendra Modi had set out an ambitious manufacturing programme in 2015, looking to improve the share of manufacturing in India’s GDP to 25 percent by 2025 from the current 17 percent. In an interview to Forbes India, Prabhu spoke about what 2018 looks like for India and his attempt at reviving the manufacturing and export sectors. Edited excerpts:

So, if you take both, the fundamentals of Indian economy are stronger and getting stronger every day. Savings rate is improving and the investment rate is growing too. We are also seeing improved exports and beginning of good activity in manufacturing. Services, too, are growing well. This is one part. Then there is the external sector, which is also looking better.

The second part is the psychological part. If you go by business confidence, it has, for the first time, improved in a significant way. If you go by the PMI (Purchasing Managers’ Index) for manufacturing and services, it has improved too. And psychology, as I said, influences decision-making on real economy. So, we should look at better days.

Q. 2018 is a critical budget, just ahead of the elections in 2019. What are your expectations?
We will have to see on February 1 what’s there in the budget. It is the prerogative of the finance minister. The wish list of every minister is large, and the finance minister has to balance the budget. But, we are expecting a good budget, which will take India forward and consolidate the position we are in today.

Q. The PM has laid a lot of stress on Make In India. How is it progressing?
The Make In India programme is an important component of not just make in India, but also the making of India. That’s because the GDP can’t be sustainable if manufacturing doesn’t grow in good numbers.

We had a big manufacturing summit in Mumbai recently in which we asked the companies and industrialists who have been manufacturing for decades to make a plan that would make us a $5-trillion economy by 2026-27; and $1 trillion must come from manufacturing. We are now identifying sector by sector, for instance, how much must come from steel, pharmaceuticals, cement, chemicals and others. This is about modernising existing industries, scaling them up to a level where they can contribute to 20 percent of the GDP.

The second part is new industries. We cannot rely on these old industries alone. So Make In India must focus on industries that are not born today. We are trying to find out those industries and work on them. If you look at it, the company that will reach the $1-trillion market cap is a company that wasn’t listed 20 years ago. There are companies that are listed for 100-plus years and they will never reach that mark.


Q. But manufacturing across the world has been affected by Artificial Intelligence and automation. In that regard, how do you see the future of manufacturing in India?
There is no conflict in that. Manufacturing has changed over the last hundreds of years. What is important is that the manufacturing we will do tomorrow is relevant to the times. If you scale up the level of manufacturing, its capacity and propensity to create that many jobs in the old manufacturing sectors may not be as high as the new ones, but doesn’t mean jobs won’t be created. We will go into new industries and the modernisation of industries, which will create jobs. It is a misconception that automation doesn’t create jobs.

Q. Your ministry is looking at a new industrial policy. Can you tell us what that will look to do?
This policy will look into deregulation, new manufacturing facilities, industrial corridors, and specific products where manufacturing can happen on a large scale.

Q. The Foreign Trade Policy (2015-20) had set an ambitious target of $900 billion in exports by 2020. Are you on target?
We have not kept any targets. We will aim at the highest possible rates. My mid-term export policy was clear, that we will work on strategies. The outcome of strategy will be exports. We are aiming at a good number, but I will not like to give any number.

Q. How do you think 2018 is likely to shape up for India?
The Indian economy is doing far better than many other world economies. All Indians feel that we should do better. That shows that Indians have far more expectations from themselves; this will propel the economy. Business confidence and fundamentals are improving, and structural reforms are taking place to change the trajectory of growth.

Q. Lastly, even as you talk about structural reforms, domestic spending and the issue of twin-balance sheet continue to plague the economy. Will that change?
That is what is improving. Based on PMI for manufacturing, things have improved and future spending is set to increase. There is also the deleveraging of the Indian corporate balance sheet, which will go a long way in creating investments. We see that happening already.