US FDA approval puts India on the global map of biosimilars: Kiran Mazumdar-Shaw

Biocon has embarked on developing a pipeline of interesting novel biologics which it will look at as a global opportunity, says CMD Kiran Mazumdar-Shaw 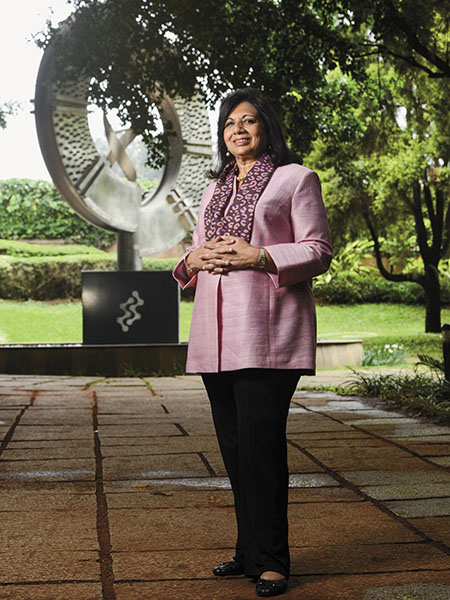 Kiran Mazumdar-Shaw  says India has not encouraged clinical research and only focussed on clinical practice
Image: Bmaximage
Billionaire Kiran Mazumdar-Shaw’s Biocon Ltd recently became the first company to have a biosimilar approved in the US for Roche’s drug Trastuzumab, which is marketed as Herceptin and used in treating certain breast and stomach cancers.

The biosimilar, to be sold under the brand name Ogivri, brings Biocon a step closer to building a truly original bio-drug, or ‘novel biologic’ as it’s called, for various markets. Biocon already has two novel biologics—Nimotuzumab for treating head and neck cancer and Itolizumab for treating psoriasis—that it markets in India, says Mazumdar-Shaw, 64, the company’s chairperson and managing director.
From an earnings perspective, the bigger prize is to build biologics for America and Europe, and Biocon is working on a pipeline.

It has also strengthened its partnership with Mylan NV, which will market Ogivri in the US starting 2019, when Roche’s patent on the original drug expires.

Q. Give us some context of India’s pharmaceuticals industry, leading to the development of biosimilars…
India’s pharma sector has played a pretty important global leadership role when it comes to generic drugs. This category is based on our huge skill base in chemistry and synthetic chemistry. And we’ve leveraged that to take us to where we are today.

To put things in context, if you want to develop a generic drug, it takes about two years and about $5 million. Basically, to show equivalence to the drugs through Beba (bioequivalence and bioavailability) studies. This is the model that has been successfully pursued by Indian pharma companies over the years.

Then came the opportunity to develop biosimilars, which are near-identical copies of biologics—large, complex molecules which are impossible to identically copy. But a biosimilar can do the same job as the biologic drug. Therefore, the efficacy, safety and immunogenicity of such drugs are important factors. They require extensive clinical trials and studies over hundreds of volunteer patients, which is expensive.

Typically, a biosimilar drug can take upwards of $150 million to develop and about 80 percent of that cost is the clinical development price. The rest of it is the pre-clinical development of the drug. The risk is pretty high because you are spending all this money and hoping that the data that comes out matches that from the tests conducted with the original drug.

This is an opportunity for us to be a differentiated pharmaceutical company because as an entrepreneur, I’ve always believed that you should try and find a niche for yourself.

“ In India, there’s a dearth of expert skills in evaluating new drugs.

Q. What’s the significance of Biocon winning the US Food and Drug Administration’s (FDA) approval for Trastuzumab’s biosimilar?
It’s taken us almost a decade. We started work on the biologic [Roche’s Herceptin] in 2008 and got the approval in 2017. We got the Indian approval in 2014, so that was a six-year effort too.

This was the first biosimilar for Herceptin approved by the US FDA. It was a proud milestone for us because there are competitors, including Pfizer, Merck and Amgen, with deeper pockets and more experience in developing and selling biologics, which says a lot about what our scientists have done.

It’s recognition that India has the skills to develop such complex molecules. It puts India on the global map of biosimilars. And Biocon has a pipeline of other biosimilars that are nearing the finishing line. We are kind of a lone ranger in India in this space.

Trastuzumab is a $6 billion global opportunity; the US and Europe between them are a $4 billion opportunity. The World Health Organization has now put this in its essential medicines lists.

We also believe that we have a development and manufacturing advantage by developing the drug in India. The entry of generics leads to a discounting in the price, which on the other hand expands the market. Therefore, we are looking at a large market opportunity.

We have [the biologics] pegfilgrastim, glargine and bevacizumab in our pipeline. I don’t think there’s a chance of huge competition in the first four to five years as there will be only a handful of players with the risk appetite and deep pockets to develop these kind of products.

We already had two novel biologics in the Indian market, but didn’t have the deep pockets to take them overseas. Therefore, we almost confined ourselves to the Indian market… but that’s helped us to become big in biosimilars.

Now we have embarked on developing a pipeline of interesting novel biologics, which we will look at as a global opportunity. One is in the area of cancer again. These are called ‘fusion antibodies’, which combine two antibodies to make one, and the method of action involves first attacking the tumour and then getting to the T-cells to further attack and kill the tumour.

So far, all the work has been done in a pre-clinical environment and the data looks promising. We’re going to start human clinical trials next year.

Q. How’s Biocon changing and how do your products reflect that?
Biocon started with niche enzymes. However, it was with the entry into biopharmaceuticals that we saw our revenues jump exponentially. In biopharmaceuticals, in the near-term, the big opportunity is going to be biosimilars. The biologics will take some time to enter global markets. If we’re going to start clinical trials for a biologic next year, it will take us three years to complete those clinical trials.

Q. How do you see the interplay of biotechnology with machine learning and quantum computing?
There is a lot of overlap. Today, drug research relies a lot more on information technology to accelerate. Product characterisation, for instance, is a long, cumbersome process and needs highly skilled people. If one can tap AI and quantum computing, this can probably be done much faster.

Therefore, you are going to use the new technologies to shorten timelines. Even today, clinical trials are done in a certain way, but there might come a day when one might have virtual models, and a lot of data points and findings can be acquired much faster. For instance, we can get early signals that tell us if a drug is behaving the way it is supposed to. If predictive technologies can say ‘yes the immunogenicity profile of this drug is fine’, that shortens development time frames.

Q. In India, where are we in general in your industry, including regulation?
How many companies in India have developed novel small-molecule drugs? None. So, unless Indian companies start innovating novel drugs in the small molecules space, you aren’t going to see a huge augmentation of regulatory skills. That said, it is improving, at least in the biopharma area; there are decent skills but in small numbers.

What is happening in India is also because we haven’t encouraged clinical research and only focussed on clinical practice, there’s a dearth of expert skills in evaluating new drugs—that’s the issue, it’s the whole clinical research ecosystem. It’s all interconnected. Now if you start having companies developing new drugs, you will also start getting people.

Biocon is developing oral insulin, for instance, which is insulin administered as a tablet. It will be the world’s first, if it works. We have a large number of diabetologists in India and diabetes is an area that is well understood.

On the other hand, with cancer, where we don’t have adequate expertise to do some of the evaluations, we are likely to rely on external advisors from the US and Europe. Oncologists in India haven’t really been involved in enough critical clinical research. We want Indian oncologists to become active in this. For instance, in the novel biologics that Biocon developed, the doctors involved continue to be research oriented and take an interest in the progress of the drug development. It’s an evolving ecosystem, which needs to grow.

Tweets by @forbesindia
Raise the bar and flaunt your watch
We cannot rely on old industries alone: Suresh Prabhu