Madrid: A beautiful blend of all things foreign and domestic 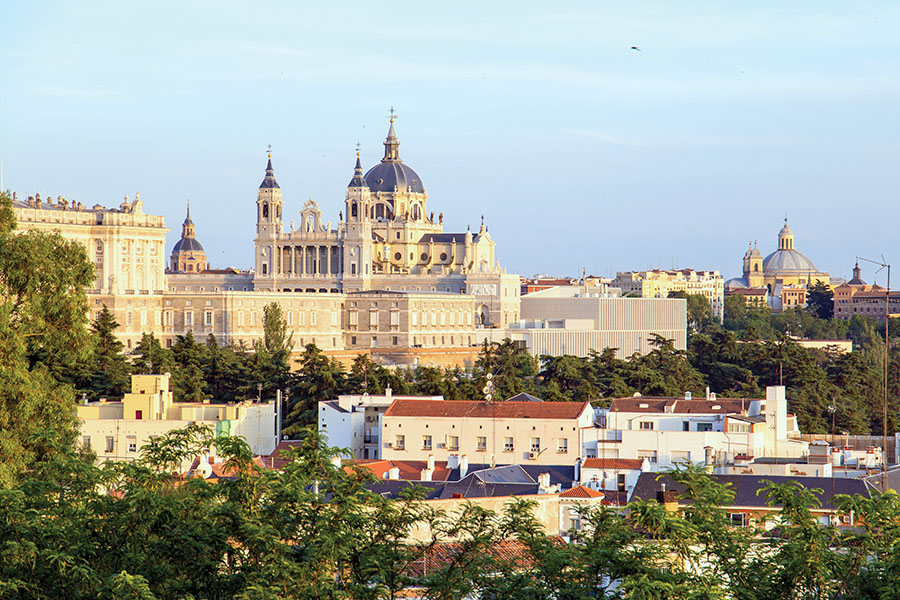 A view of Madrid’s cityscape
Image: Shutterstock
It’s hard to be in Madrid, in a dimly lit taverna that too, and not think of Ernest Hemingway. And it was while sitting in one such establishment, sipping some sangria out of a rather generously-sized mug, that I came to the conclusion that I wouldn’t want to be Hemingway. Literary success and awards aside, Hemingway had more than just a few bigoted views (he has been accused, at various times, of being racist, anti-Semitic, sexist and homophobic). However, I also came to the conclusion that I wouldn’t be opposed to living through some of the adventures that Hemingway had. After all, he got to see and experience a version of Madrid that, with the exception of time travel, most of us never will.

As these thoughts swirled through my mind, my friend returned to the table that we occupied in the Cafe Cervezas y Tapas de Belgica. It certainly wasn’t the most typical Madrid tapas bar to visit, given its Belgian theme, but since we were caught out by a sudden bout of rain, it was where we’d ended up. I was staring at the Tintin memorabilia that occupied pride of place in that old-fashioned posada (Spanish for ‘bar’), still thinking of the man who wrote The Sun Also Rises. It was to be one of the few brief moments of silence on that trip.

Madrid isn’t the sort of city that allows for too much silence. It’s something I had discovered as we wandered through the Centro district’s Barrio de la Latina neighbourhood the previous day. It was late April and the weather, with a series of sudden showers, left a lot to be desired. But that only served to increase the lure of the many tapas bars that lined the Calle de la Cava Alta and the Calle Cava Baja. No visit to La Latina can be complete without strolling down these two streets, where the bars stand door-to-door, like a row of candidates in line for an interview, eager to make an impression. 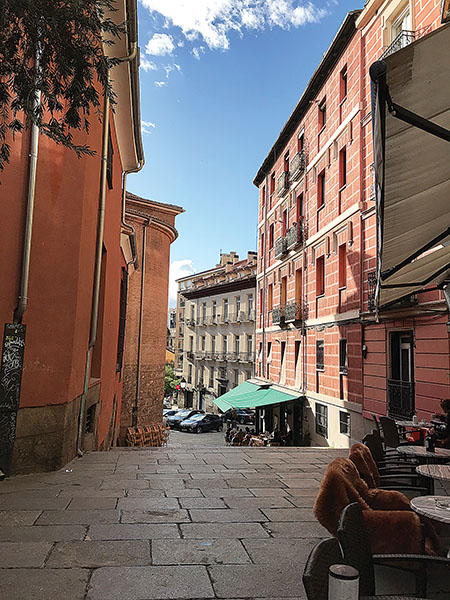 A typical terrace in La Latina
Photographs: Vaishali Dinakaran, Shutterstock
Peering into some, we found counters lined with stacks of Spanish tapas. In others, some of which were fully occupied, we saw crowds of people laughing, talking, making merry. It was becoming harder and harder to choose a bar, but finally we settled on one. The waitress was friendly, and, as is common in that part of the world, our sangria came with complementary tapas, which we certainly appreciated. While we were eating our meal of gambas pil pil (prawns in garlic and chilli) and jamon croquetas (Iberian ham croquettes), I had a moment to appreciate just how full of life this quarter of the city was, and how unlike the Puerta del Sol, which is a tourist trap teeming with buskers.

The Barrio de la Latina represents one of the oldest areas in Madrid, once housed within the four walls of the Islamic citadel. Today it’s become the home of Madrid’s many tapas bars, and it is something of a local tradition to end the work day with a cerveza (Spanish for ‘beer’) at one of its many terraces. You’ll find people sitting outdoors, catching up over a few drinks at every corner. Most of the barrio (Spanish for neighbourhood) is made up of very old buildings, with many examples of the casas a la malicia (which roughly translates to ‘houses of malice’). A little research, however, revealed that the name given to the architectural style wasn’t indicative of any sort of sinister activity; instead, it was a reference to a loophole that some clever people spotted.

Back in the 1500s, when Spain’s King Philip II transferred the court back to Madrid, it meant that his courtiers and noblemen needed places to stay, and so they’d end up “crashing”, by royal decree of course, in all houses that happened to have a second storey. So the people of Madrid, put off by freeloading Spanish aristocrats, began designing houses that looked from the outside like they were single-storeyed, but had a hidden second floor. 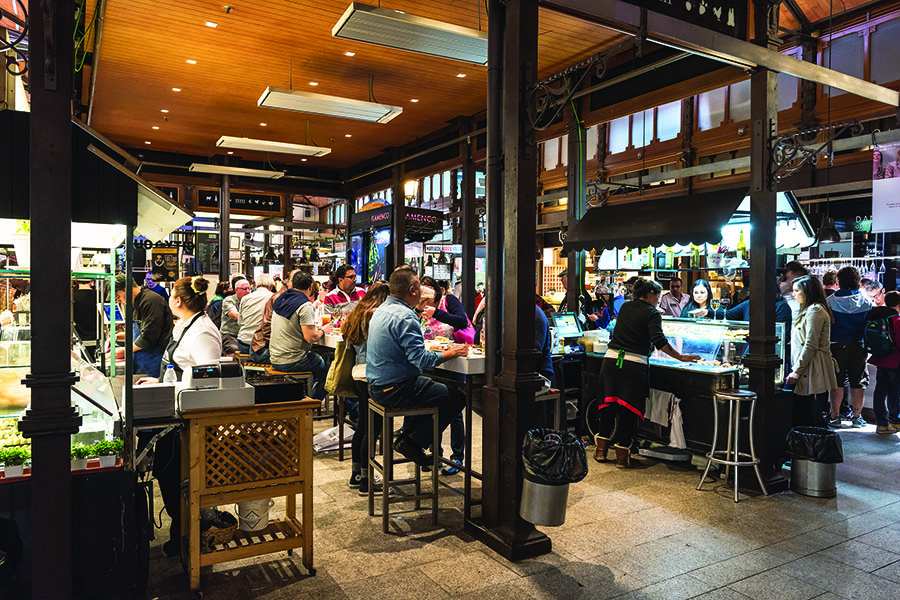 Mercado de la San Miguel that has a variety of shops serving tapas
Image: Mercado De La San Miguel
Sitting on a terrace in the barrio, enjoying some more sangria and the sight of the locals deep in conversation, I felt a little tickled at the thought of Madrid’s Couchsurfing tourists. They were probably quite unaware that long before Casey Fenton and Dan Hoffer came up with the social media-based concept of holiday stays, Philip II had already coerced his subjects into letting people stay in their houses for no money.

There is more to La Latina than just the bars and cafes that you encounter every few steps, though; there is something almost ethereal about its old-world charm. It seems as if the place has evolved in a most organic way, with the past making way for the present quite naturally, and with all things new respecting the space that they have been offered. Even amid the back alleys and the stairways cut into the old town, hints of the modern have unobtrusively sprung up. Which is why the architecture of the historic neighbourhood, and the new age graffiti that was so plentiful, merged beautifully.

I had another realisation as I wandered through La Latina: You can study the area on a map and be convinced that you have understood where it begins and where it ends; but out in the real world, while walking through the streets, it is impossible to figure when you’ve crossed into another part of the city. Much of the old town looks similar, and just a single turn from La Latina led us into the neighbouring El Rastro (famed for its Sunday flea market), and yet another turn later we find ourselves in Sol, or Embajadores, or Cortes—all charming little areas. 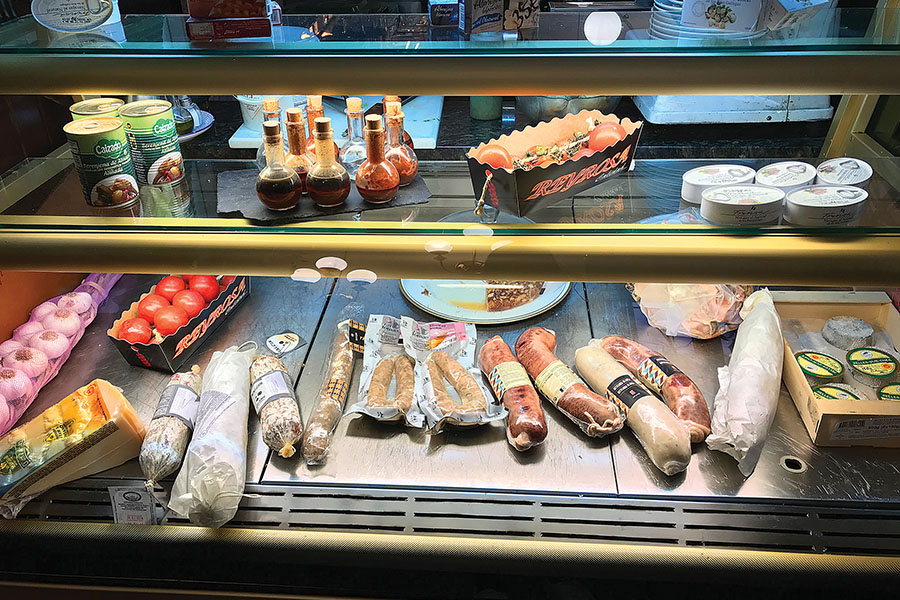 A bar-cum-restaurant that sells cured meats at Embajadores
A short walk from La Latina led us to the Plaza de la Cebada, which is known for the Mercado de la Cebada. What Les Halles is to Paris, the Mercado de la Cebada is to Madrid. But since we chanced upon it on a Sunday, we had to be content with just looking at it from the outside. More importantly, though, we discovered that the Jardines de la Vistilla, a garden just a short (slightly uphill) walk away, offered a stunning view of La Latina.

From a distance, you can spot the top of the dome of the Cathedral Santa Maria la Real de la Almudena at the Plaza de la Armerio, although the Royal Palace of Madrid wasn’t visible from our vantage point. And though it was a longer walk to the Jardines de la Montana (which is a must visit because of the Temple of Debod), we discovered the view was well worth it. Not only can you see the Cathedral, but beyond the Cathedral, the San Francisco el Grande—the basilica that stands at the very heart of La Latina. Seen from above, it puts the city in context. The neighbourhoods didn’t seem to merge quite so seamlessly, and—although the sangria might have contributed something to the view—I felt like there were subtle differences in architecture that you could spot from a distance.

But no tale of Madrid can be complete without a mention of the gastronomic delights of Sol. On my very first day, being a ravenous tourist fresh off an aircraft, my travel companion and I settled on one of the many eateries in the centre of the Plaza Mayor, Madrid’s largest and most impressive square. The paella there had satisfied our hunger, but not our taste buds. 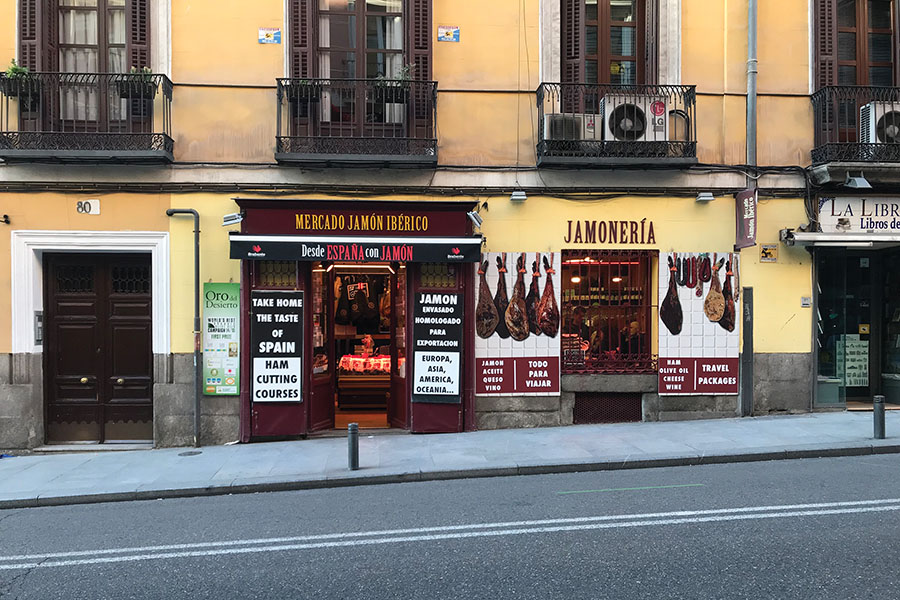 A traditional ham shop in Madrid
Imagine our delight, then, when the wonderful possibilities within the beautiful Mercado de la San Miguel presented themselves. There was every kind of tapas, ranging from ham and cheese to sea urchins and chicharron (pork crackling, which I found was a taste I hadn’t yet acquired). Name the topping, and you could have it on your tostada, whether it was cod pate, smoked cod, sliced cod, cod liver, or whatever else. And there was paella. In fact, it was so good, that it more than made up for the insipid experience of the afternoon. Madrid had absolved itself in our eyes, hearts, and stomachs.

To truly explain the feeling I got from Madrid, though, I must turn to another gastronomic experience. Ordinarily, I would never agree to stand in a queue to eat ramen in Spain, just as I would not stand in a queue to eat tapas in Japan. But in the spirit of doing as the locals do, we stood in line to enter an establishment called Ramen Kagura. It will remain one of the best meals that I’ve ever eaten.

So, it was over a bowl of miso ramen, I found myself thinking once again of Hemingway. In his short story of the same name, Hemingway had described Madrid as “The Capital of the World” because it was home to people from all over Spain. It’s been decades since then, and Madrid has opened its arms wide to people from all over the world, and Hemingway’s description rings even truer.

See, when it comes to Madrid, it isn’t just that the old and the new blend so harmoniously. It’s also that all things domestic and all things foreign come together in a most beautiful way. And you’ll see it if you’re willing to wander off the well-trod path.

There was another realisation I had then too. It was that save for time travel, Hemingway will never experience Madrid in quite the same way that I did.