With investment from Italian brand Ermenegildo Zegna, the designer is set to change the game for bespoke menswear in India 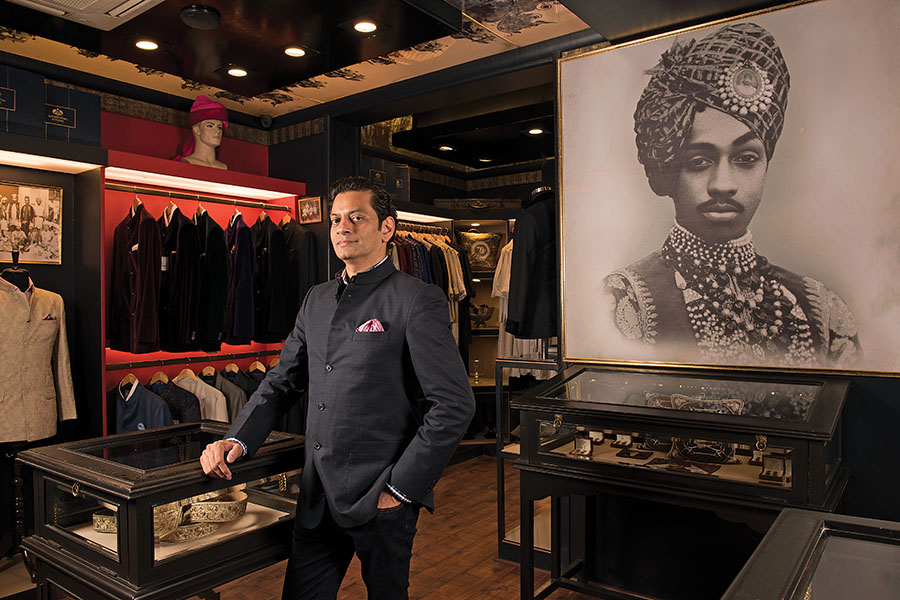 
Raghavendra Rathore remembers his childhood as days spent in the punishing Rajasthani heat, in a jeep with his father, who was an MLA from Luni tehsil. Although he hails from the erstwhile royal family of Jodhpur, Rathore had, what he calls, a “modest upbringing”. It exposed him to a changing India early on, shaping his aesthetic in many ways. “I would go along with my father on his visits, and couldn’t believe how weavers, who lived in an arid desert with no connectivity, no textbooks, back when there was no internet at all, could make durries [carpets] with such brilliant patterns and colours,” he recalls. “It always left me fascinated—and wondering that if they could achieve that despite being so cut off from the world, what could they make with our means and access?”

That was perhaps the beginning of 50-year-old Rathore’s journey into couture. After training at the Parsons School of Design in New York, and working with high-end brands such as DKNY and Oscar de la Renta, he returned to Jodhpur to set up his eponymous label in 1994, specialising in traditional menswear. Rathore still lives and works out of Jodhpur, a heritage city that has inspired his sharp, regal flair. “It gives me, perhaps, not a trendy, contemporary perspective, but fresh ideas,” he says. “It excites people to see them translate into products.” The brand has seven stores in Delhi, Mumbai, Kolkata, Hyderabad and Surat. 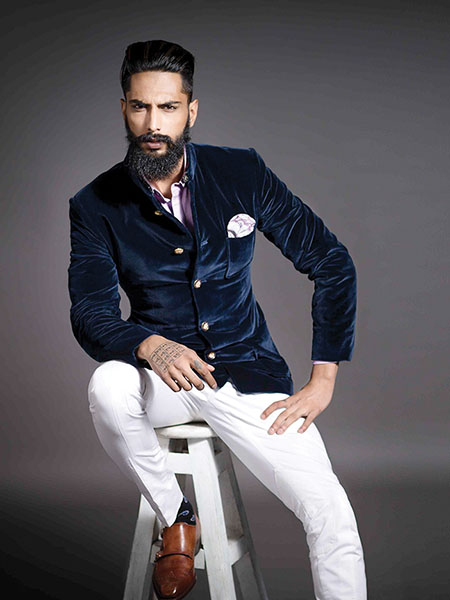 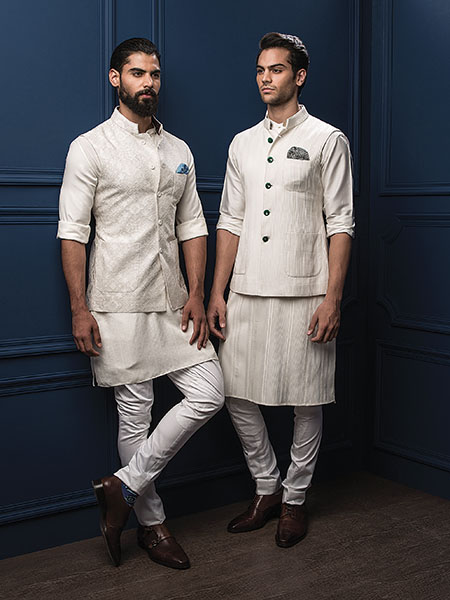 Raghavendra Rathore’s collection, including stately bandhgalas, has captured the fancy of India’s swish set. He’s now working on offering more value to customers who buy his clothes
About a month ago, brand Raghavendra Rathore received undisclosed investment jointly from Italian fashion house Ermenegildo Zegna, one of the world’s foremost names in menswear, and its India partner Reliance Brands. (Reliance Brands is a part of Reliance Industries, owners of Network 18, publisher of Forbes India.)
Popularly known as Zegna, the Italian company is almost 120 years old and has more than 500 stores across 100 countries. The luxury brand, now managed by the fourth generation of the Zegna family, is known for its plush made-to-measure suits, crafted in fine fabrics such as an exclusive blend of soft wool. This investment, Rathore believes, will change the game for his company. 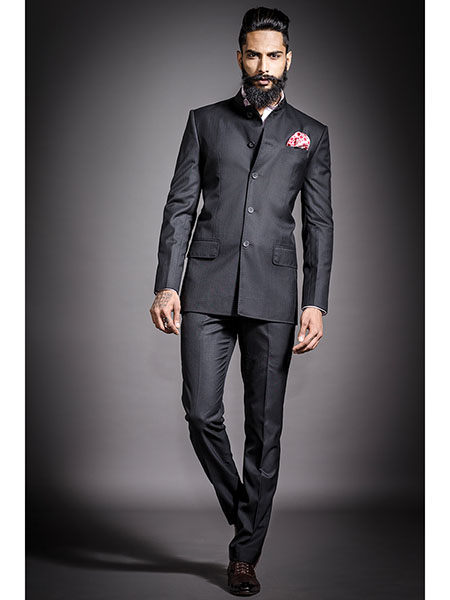 The right blend
“The setting of the meeting was so beautiful that it didn’t feel like a formal business decision,” says Rathore, recalling his meeting with Gildo Zegna, CEO of Ermenegildo Zegna, at the grand Villa d’Este hotel in Lake Como, Italy. “As Italians, they have family values similar to ours. I’ve been talking to a lot of people over the past few years, but a deal like this would always get stuck in the details. This time, I could feel the difference in the body language, and a sense of relief when sitting at that table. It’s important to have a comfort level in a creative partnership, and my wife and I came back with big smiles.”

For Reliance Brands, the deal is an extension of its decade-old partnership with Zegna. “Gildo and I have often spoken about how 2018 is meant to be the tipping year, where more than 50 percent of global luxury consumption will come out of Asia,” says Darshan Mehta, CEO of Reliance Brands. “We’ve been looking for an opportunity to do something together in this space, and it took less than one conversation to put this together.”

According to Mehta, a slice of young men’s wardrobe is now being uniquely serviced by designers like Rathore. “This slice could be driven by occasion or by mindset, but the consumer is making that choice with his wallet, buying into not just the product, but also the story that it tells,” he says. “This story comes through its heritage, authenticity, craft and the process involved—a great combination. And to add a commercial aspect, a fabulous face to the brand.”

He acknowledges that while it is a leap of faith for Zegna and Reliance, the jump is bigger for Rathore. “Raghavendra Rathore, a home brand, needs to have the ability to make space in it for a corporation like Reliance and a global powerhouse like Zegna,” he says.

For Rathore, the partnership will help scale the brand not just with the additional funding, but also with an exchange of know-how. “This opens up the ability to realise the vision of the brand as it was,” he says. “Until now, we were working with one hand tied behind our backs. Now, I see a very organised way forward; to reach our goal we will require the skillsets and value systems that our partners can bring in.”

A key part of this agenda is to bring in, to put it simply, speed. “I’ve seen cases where products take a year-and-a-half to mature. But now, the process of getting an idea from a fluffy cloud onto the table will accelerate, and this, of course, changes the bottom line,” says Rathore.

His team has already visited Zegna showrooms in Italy to understand the importance of service. “Immediately, you realise that menswear is not a product you can sell like womenswear,” he says. “You can’t keep talking about fabric and patterns, so you have to emphasise other aspects, led by what the social landscape is screaming out. If sportswear is a buzzword, then that can translate into a collection.”

Brand value
“The first thing to do with the investment is to stand tall,” says Rathore. “It’s important that brand Raghavendra Rathore has tenacity, is better postured and, as an individual, I can set myself a little apart. We need to start getting customers to connect to the brand, and create a stickiness—that’ll be a great learning for us.”

In India, designers have a tendency to speak for their brand, and take a bow at fashion shows. “Our big aim would be to corporatise it, the way international brands have. There’s a lot of give-and-take,” he says. “We don’t want to focus purely on the backend and frontend; it’s also about enhancing the consumer experience.”

Rathore’s team has been talking about how to bring more value to the customer, one who is spending several lakhs on a bandhgala. How do you give more for that value? What can you do that goes well with that product? “It could be a special, handmade shoe-polishing kit that goes with your bandhgala shoe,” he says. “It would take us a year or two to create our own. But this deal will help us source such items faster from around the world. It’s these small touches that add emotion to the brand, help groom the product.”

High-end retail spaces are few and concentrated only in select pockets of India. How do you go beyond ‘x’ number of stores, and take your brand to the next level are questions Rathore hopes to pose to his new colleagues and partners.

Ecommerce is being defined in the bespoke space, which is about the touch-and-feel experience. “We’ve looked at all the competing international brands doing bespoke, and the summary is that every experience is unique to a geography,” says Rathore. “It’s a complicated process to parcel the same product to a different culture. We’re working on understanding that.”

With a large percentage of luxury consumption coming from China, India and South Korea, it may be the right time to build a global Indian brand that focuses on the East. Zegna was an early mover in this region, spearheaded by its CEO, Gildo Zegna. It was the first luxury menswear brand to open a fully owned store in China back in 1991—and now, with more than 70 points of sale, Greater China remains the largest market for the Zegna brand worldwide.

Rathore’s advantage, says Mehta, lies in his story. “Here’s a brand that has so much history,” he says. “There’s romance in the tale of the Indian maharajas that has global appeal; the Chinese didn’t have it, nor did the Japanese. That story is timeless and borderless.”

A foot in the future
Rathore is making another foray into the future by setting up the Gurukul School of Design in Jaipur—a design school that teaches not just the nuances of creating fashion, but also those of running a fashion enterprise. It opens on August 28 and has a faculty board that includes Tikka Shatrujit Singh, India head for LVMH (Louis Vuitton Moët Hennessy), celebrity stylist Anaita Shroff Adajania, and fashion entrepreneur Pernia Qureshi.

A four-year bachelor’s degree in design will teach students about structure, design principles and textiles as well as entrepreneurship, communication and marketing. The teaching style is inspired by traditional Indian gurukuls—there will be no tables and benches, but lounge seating where the faculty sits along with the student, imparting actual knowledge, instead of teaching from books.

“We’re trying to see into the future—where does the new breed of designers come from if everybody teaches mass market or goes into the export arena?” he says. “The idea for us is to interplay with these graduates and what’s going on in the company, and connect the dots for the future.”