Into the Fire - Rajasthani Royal Cuisine 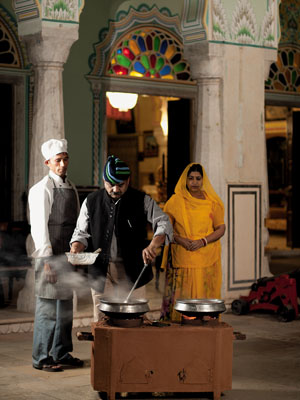 Laal Maas, Govind Gattas, Doodh ke Samose, Kaleji ka Raita, Khad Khargosh, Khargosh ki Mokal, Lahsoon ki Kheer… the aromas wafted over from the kitchens of our royal neighbours in Jaipur every day, bearing with them the gossamer heritage of warrior traditions, hunting expeditions, ceremonial repasts. More than 25 years later, when I see restaurants serve up yet another watered down version of Jungle Maas or Laal Maas, I wince. Rajasthan’s palace cuisines are in serious danger of surviving only as parodies of their former selves.

The apprehension grows as Rani Laxmi Chundawat, author of many books on Rajasthan and perhaps one of the oldest royals around at 94, holds forth on the scale and intricacy of the dishes of her youth. “Each king had at least 10 cooks in his personal kitchen, members of the Wahri caste in Marwar and of the Bhoi caste in Mewar. Breakfast comprised a minimum of 10 dishes. Each king had a ‘ration’ of mewa (dry fruits). They were also assigned rotis of a particular weight, which would be served with each meal. My father, the rawat of Deogarh, for instance, had a sawa ser ki roti, which was served to him and then distributed among his retainers and their families.”

“Each thikana [royal household] in Rajasthan also made its own alcohol. There was a system for training people in alcohol-manufacture, just as there was a practice of one royal household sending its cooks to another to learn its specialties.”

One such specialty, the rani remembers, was the Bina Pani ki Roti, made with just boora (similar to caster sugar), ghee, milk and flour. “It couldn’t be rolled like a chapatti, it had to be pressed into a flat roundel by hand, and cooked on a mitti ka tawa called a khejdi,” she says. The roti, which could last up to 45 days, was traditionally sent to the in-laws of the daughters of each family, often decorated with saffron, cardamom seeds and raisins.
Creativity and humour also came into play when the son-in-law visited his sasural for the first time. “A live partridge would be enclosed in a box and set at his place with the usual fork, spoon and knife. The moment he opened the box, the bird would fly away, ffffrrrrr!”

And what about the legendary Rajasthani Sula? “It was actually suda,” Rani Laxmi smiles, “made from the meat from the back of a goat leg. After it had been roasted over an open charcoal fire, hot ghee was poured over it; the resulting smoke was the source of the flavour.”

“We also had a Hari Mirch ka Potha: Big green chillies, farmed with the root, were slit along the length and stuffed with masalas, while the roots were wrapped in cloth, allowing them to stay green even after deep-frying. The potha was served upright on a bed of kneaded dough, resembling the original plant.”

Apart from time and ingenuity, many other factors that characterised royal cuisine are now endangered or obsolete.

Thakur Man Singh of Kanota, says, “Ninety percent [of the meats our forefathers ate] was game, which is no longer legal. Copious quantities of dry fruits, ghee and butter went into those dishes; all doctors frown on them now. The purity of food-flavouring ittars like the oils of chameli or juhi is suspect. No wonder then that most of the old foods, along with the techniques, are slowly dying out.”

The tragedy is accentuated when he invites me to sample Anjeer Mutton, Mewari Korma, whole brinjals, Khadi Daal, Khus Khus ki Roti and Lauki ki Kheer. Piquant kaachri (a member of the gourd family) and aloo-pyaz accompanies the array, their extant status underlining the preciousness of the other dishes. “It’s the perfection of the coal fire aanch [flame] that gives the ruaab [flavour] to the meat,” smiles Man Singh. “I’ve been cooking for almost 30 years now, and the ras [juice] of my hands gives my food a unique taste.”

The chicken, cooked in a wide circular handi on a coal fire, melds in home-made ghee with onions, curd, cloves, green cardamom, cinnamon and cumin. The Anjeer Mutton teases the palate with sweet hints of the dry fruit, the Khadi Daal throws up a strong aroma of garlic, whole red chillies and cinnamon. And the Khus Khus Roti is delicious enough to be eaten by itself.

“Everything is cooked fresh: We don’t use pre-cooked, boiled meat, chicken, vegetables or gravies,” Man Singh says, even as his wife, Sandhya, reminisces about making paya the old-fashioned way, scalding off the hair and boiling the front hooves of the goat for a gelatinous stock with the flavour-enhancing marrow. 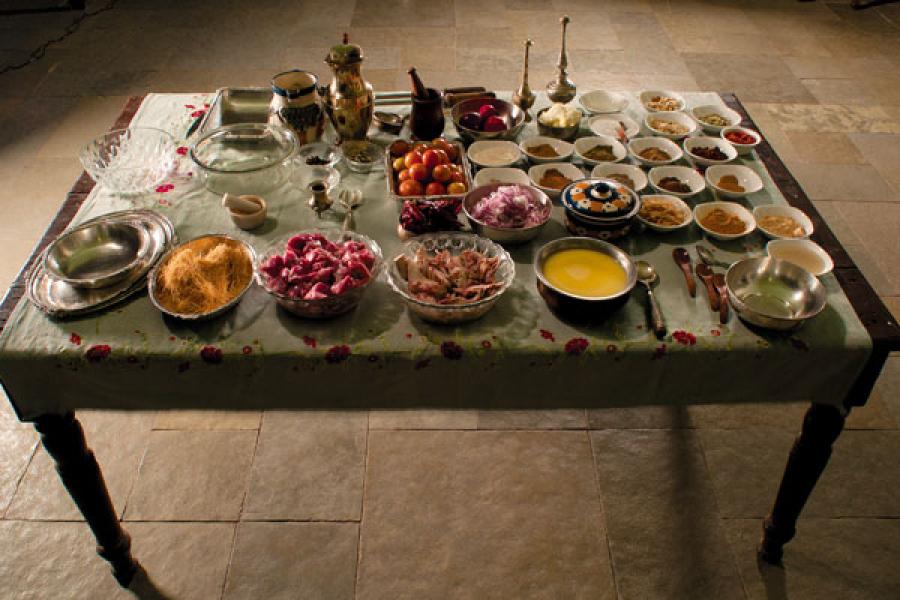 Image: Amit Verma
PAST REPAST Many of the main ingredients that were used in royal meal are now illegal (game meat) or cinsidered unhealthy (ghee and butter)
A food conversation with Deogarh’s Shatrunjay Singh and his wife Bhavna is akin to opening a trunk full of old treasures. “Rajput cuisine,” Shatrunjay says, “traditionally uses a lot of garam masala and mirch because it was always accompanied by alcohol — you need to halve the quantum of spices for today’s tastebuds — but also because it is the product of rugged, rocky terrain, barren deserts, long days of relentless sun. Hunting was a popular royal pass-time, indicated by the plethora of recipes for whole partridges, pheasants, goose, chicken, deer, rabbit, wild boar and pigs. Khad Khargosh, for instance, required the rabbit to be marinated, wrapped in a kachha roti, packed into a gunny bag and buried in a pit, topped by a charcoal fire and mud, for a few hours. If you think that’s time-consuming, consider the Khargosh ki Mokal:  The meat is boiled and shredded into long threads, a long, delicate process that no food processor can hope to equal. Even the cooking is labour-intensive, since masalas and ghee need to be added to it constantly while it bhunnos.”

He adds, “Then there’s Soor ka Saanth: Pig fat is cut in squarish pieces and placed in a mitti ka ghada [usually used to store drinking water] full of khatti chach [sour buttermilk] for two to three days, with the buttermilk being changed every day. Then the pig fat is cooked with lots of ginger, nigella and mustard seeds. It stays for a long time, like a pickle. There are no takers for such fattening food nowadays.”

While most of these dishes have long moved out of the common realm, that is not true of the Laal Maas. At royal tables, where it was served with keema samosas and phita hua meetha dahi, the ginger-spiced meat dish was considered a delicacy, calling for superior expertise. Today, it is a staple in most North Indian restaurants. 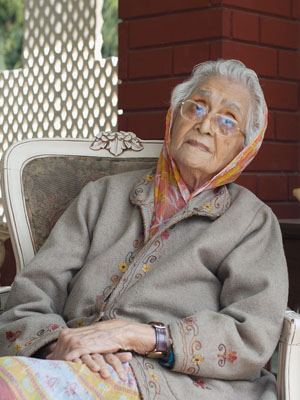 Rani Laxmi Chundawat
“Cooking Laal Maas takes a long time. The most important part is the browning of the onions: One has to add three to four tablespoons of warm water every so often to ensure the onions transfer their colour to the meat, yet be careful not to overdo it, lest the meat become an undesirable dark brown,” says Shatrunjay. “What most restaurant chefs do today is parboil the meat and, when an order is placed, cook the masala on a quick fire — which makes for frying, not bhunnoing — add the meat, toss it around a little, throw in some fatty stock for flavour and send it out to the table. You simply cannot serve an authentic Laal Maas in an a la carte restaurant.”  Like Doodh ka Samosas. To make these artful little art forms, Bhavna says, “you needed a lohe ki kadhai half-filled with dry grass and water. A special metal thali would be upturned on top of the kadhai rim, and both vessels would be placed on a charcoal sigri. A long wooden stick with a cloth head would be dipped into unboiled buffalo milk and used to paint a thin layer on the base of the thali. Just as it cooled down, another layer would be added, and then another. Then the crepe-like sheet would be peeled off the plate, shaped into a cone and stuffed with cardamom, pista and misri.”

Exotic as these foods sound, it’s undeniable that lifestyles — even Rajput lifestyles — have changed drastically from “back in the day” when they evolved. The high-octane, energy-producing foods that fed an army going to war or a hunting party are simply unnecessary in today’s cushioned existences. As irrelevant is the idea that the use of an animal, when slaughtered, had to be maximised — which led to the creation of dishes such as Brain Curry [goat skull bones were bhunnoed with the masala, into which was added the brain and the jelly — fat, really — obtained by boiling the animal’s extremities] and Kaleji ka Raita [the liver was boiled, cleaned of all membranes and veins, sliced finely and incorporated into seasoned curd]. 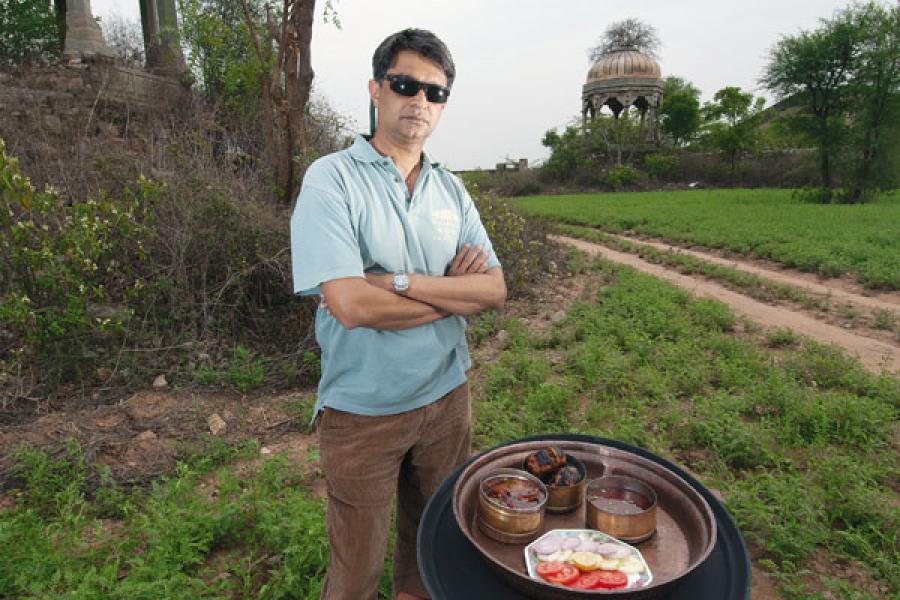 Image: Amit Verma
ON THE PLATE Shatrunjay Singh with his preparations - Laal Mass and Kheema bhati at a farm near Aamer Fort in Jaipur
Interestingly, the non-vegetarian food was mostly the preserve of the menfolk, from the hunting and gathering to the cooking and eating. As Yaduvendra Singh of Samode says, “My paternal grandmother was from Nepal, my maternal grandmother from Tripura and my mother was a princess from Gujarat. I grew up on food strongly influenced by all three regions. This kind of cultural osmosis was a reality across all the thikanas in Rajasthan. In fact, we still have kaleji cooked in raw mustard oil and aloo ka achaar, both Nepali dishes.  For our hotel at Samode Palace, we have adapted and reinterpreted old recipes: We serve squid the way kaleji was made in mustard oil, with the masalas toned down, a thandai cheesecake and a masala chai crème brulee.”

Adaptation and reinterpretation may be the way forward for much of Rajasthan’s endangered cuisines.

As Bhavna says, “When India opened up to the world, we suddenly became enamoured of the West, to the extent of deliberately turning our backs to our own cultures. Now a few people are realising the value of what we stand to lose. For them, we have put together a collection of our local recipes, called Deogarh Delights. Digvijaya Singh’s Cooking Delights of the Maharajas is another valuable cookbook.”


Saucy Secrets
For Deogarh’s Shatrunjay Singh, the whys behind the food we cook is as essential as the hows. Call it hunter logic, or just practical tips, they will make you a better procurer — even if your only weapon is your wallet.

Mita Kapur is the author of The F-Word

(This story appears in the 25 March, 2011 issue of Forbes India. You can buy our tablet version from Magzter.com. To visit our Archives, click here.)