Hamilton may be a Broadway blockbuster, but most theatre investors lose a lot of Benjamins 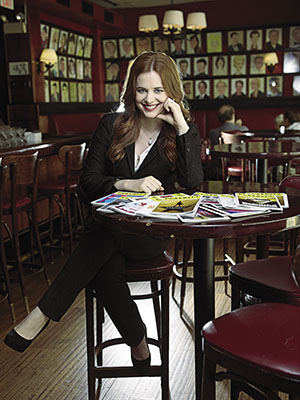 Image: David Yellen for Forbes
Founding mother: “While you can’t make a living on Broadway,” says Hamilton investor Brisa Trinchero, at Sardi’s, “you can make a killing.”

Last November, shortly after Hamilton transitioned from selling out the tiny non-profit Public Theater to making millions per month on Broadway, investor Brisa Trinchero received a call from an inquisitive tech billionaire.

“I want to get in on Hamilton’s next round,” he said plainly.

“Broadway doesn’t work that way—there is one capitalisation,” explained Trinchero, who has invested in 20 productions, including Beautiful and Porgy and Bess, through her company, Make Musicals. “You get one shot to invest in a Broadway show.”

Fortunately for Trinchero, she didn’t throw hers away. She is among Hamilton’s roughly 100 carefully selected backers—a group that includes billionaire Len Blavatnik and Tony Award-winning producer Kevin McCollum—who collectively came up with the $12.5 million capitalisation for Lin-Manuel Miranda’s groundbreaking hip-hop musical.

They have all been handsomely rewarded. In its first year on Broadway, Hamilton was projected (in June) to gross $100 million, with some $25 million in profits (and nearly $100 million in advance sales). Investors have already recouped their initial outlays; for each dollar put into the show about the man who created American money, they can expect to reap twice that each year, indefinitely. They’ll also earn their share of critical glory: Hamilton won 11 Tony Awards at the ceremony held in June this year (though Miranda has since left the show).

“I knew that it would be a game changer when I saw the first act,” says Ted Chapin, former chair of the American Theatre Wing, which founded the Tonys. Adds Ron Chernow, whose Alexander Hamilton biography was Miranda’s inspiration: “It’s the kind of thing that happens once every 50 years.”

When it comes to investing in Broadway, a success like Hamilton is about as likely as, say, an illegitimate orphan immigrant becoming the first secretary of the treasury. In other words, don’t consider backing theatrical productions unless you’re prepared to lose a lot of paper featuring portraits of other Founding Fathers. Most Broadway shows never turn a profit; last season, just 10 out of 36 new productions managed the feat. Among the most famous flops is Spider-Man: Turn Off the Dark, whose investors took a $60 million bath after a tidal wave of bad press and insurmountable weekly expenses. But every year new Broadway angels keep expecting heavenly results.

“As far as bad investments are concerned, it’s a good investment,” says Tony-winning producer Jack Viertel. “It’s much more fun than other bad investments, and the jackpot, should you ever hit one, is big.”

Indeed, the rare Hamilton-esque successes range from A Chorus Line in 1975 to The Book of Mormon in 2011. The Lion King has grossed more than $6 billion worldwide, and Wicked is Universal’s most lucrative property, topping even the Jurassic Park and Terminator franchises. Says Trinchero: “While you can’t make a living on Broadway, you can make a killing.”

The 35-year-old Trinchero learnt the hard way. She got her MBA from the University of Portland in 2005, and within a few years, she was running one of the biggest theatre companies in Oregon. In 2010, one of her donors fell in love with the musical Bonnie & Clyde, which was on its way to Broadway. He partnered with Trinchero, contributing $250,000—but lost it all when the show closed after less than a month.

Undeterred, Trinchero went to see Miranda’s first Broadway musical, In the Heights, and was so impressed that she approached Jill Furman, one of the show’s producers, and handed her a blank cheque. Trinchero didn’t have unlimited funds, of course, but knew she wanted to invest in Miranda. “Whatever show he does next,” she said, “I want in.”
Miranda was already working on that. He had read Chernow’s 2004 Hamilton biography and saw not only the quintessential American story but also the quintessential hip-hop story: An ascent from poverty driven by the power of words. Miranda asked Chernow to be a historical advisor for The Hamilton Mixtape, a concept he hoped to turn into his second musical.

“When we would tell people about a hip-hop musical about the Founding Fathers, they would laugh in my face,” Chernow recalls.

But Miranda found powerful early believers. Among them: The Obamas, who got an early glimpse of The Hamilton Mixtape at the White House. Miranda soon expanded the project into a full-length musical and in 2013 workshopped his creation at Vassar College. Eventually Furman and fellow lead producer Jeffrey Seller committed $1.9 million to debut the show at New York’s Public Theater in January 2015. Soon after, they started planning to take Hamilton to Broadway, knowing they could have their pick of investors.

As they brought on members of their inner circle, Furman remembered the blank-cheque offer from Trinchero, fresh off Broadway hits with Beautiful and Porgy and Bess, and invited her to invest a specific five-figure sum—no more, no less. The show opened on Broadway in August 2015, and the world quickly recognised the brilliance of the marriage between Chernow’s book and Miranda’s rhymes.

When it comes to investing, however, Trinchero believes the material is only one part of the alchemy. The most important ingredients, she says, are reasonable weekly operating costs—which typically run between $500,000 and $800,000 for musicals—and strong lead producers like Seller, whose résumé includes Rent and Avenue Q. Most shows also have several co-producers whose names go above the title; they pay anywhere from $500,000 to $1 million for the privilege and are eligible for Tony Awards.

Beyond that, a cast of smaller contributors usually pours in sums of five to six figures apiece. All Broadway backers must be accredited investors, which means annual income in excess of $200,000 or investable net worth north of $1 million. Recent shows like Godspell have been able to skirt the requirements by turning to crowdfunding. In theory, it’s a great way to bring more people into Broadway’s fold; in practice, it’s a great way for starry-eyed neophytes to lose money on shows already passed on by veterans.

“If you want to be involved and somebody brings a project to you, know that you might lose that money,” says Trinchero, who estimates she’s had a 60 percent return on her theatrical investments. “But know that also it’s really the only way to get in—there’s a real badge of honour for that.”

The one drawback of investing in a runaway hit like Hamilton? Endless seat requests from friends and family. Trinchero brings the curtain down firmly: “Do not call me for tickets.”