The show must go earn

Crowd-pleasers they might be, but commercial theatre holds its own in an ecosystem that depends on precarious earnings 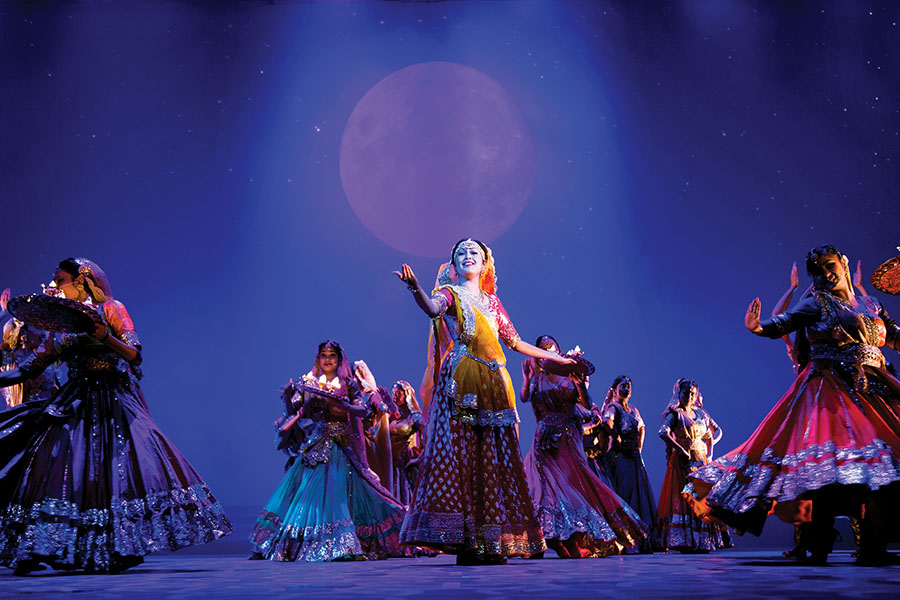 Mughal-e-Azam
Image: Joshua Navalkar
The commercial theatre stage in India, and Mumbai in particular, truly epitomises a conundrum. On one hand we have the ‘real mainstream’ as represented by cinema, which had handily supplanted its institutions of yore and whose seductions and reach theatre can hardly hope to match. On the other lies the world of experimental theatre with its claim on untrammelled artistic expression, occupying the obligatory cultural niche accorded to live entertainment much more self-assuredly. Borrowing from both worlds, commercial theatre trundles along like a heffalump, splashing out on billboards and glossy advertorials in a show of strength perhaps, but never really pushing the envelope in terms of content that might resonate culturally beyond the outmoded prosceniums it inhabits, or at least that is how general perceptions go.

For those weaned on works that proudly cater to minority tastes, commercial theatre is the grand ‘other’, existing in a world littered with artistic compromises and populated by sell-outs. However, skimming through the ads in broadsheets, you would not be faulted for thinking that it is the commercial circuit alone that is producing theatre of any consequence, if only by virtue of the inches it can afford on prime newsprint; arts theatre being social media (or free publicity) darlings by contrast.

Within the ambit of commercial theatre, there are productions that zealously guard their bottomline, working with plotlines that might be as light as air, but weighty nonetheless in terms of the means of production (and, quite often, livelihood) they sustain. Although not unheard of entirely, art subsidies or pro bono labour might be considered anathema in this sector; everybody expects, and quite rightfully, to be paid good money in a commercial enterprise. 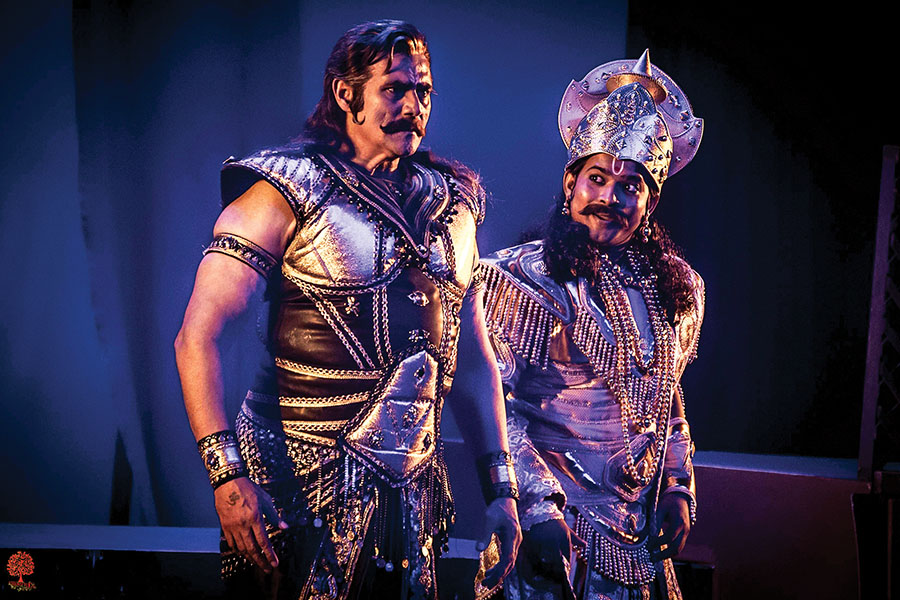 Raavan ki Ramayan
Depending on the language, there exist several parallel cultures of commercial theatre in Mumbai. The world of Marathi professional theatre thrives on the vagaries of the box-office, with low prices of admission and high rates of admittance. In the Gujarati circuit, ‘sold shows’ are in vogue, where troupes are paid fixed performance fees by promoters who then garner audiences. Lining up as many ‘sold shows’ as possible can keep a theatre company afloat. The system can be looked at as a kind of ‘business’ subsidy in which the risks, and thereby the takings, are outsourced to third parties who run an entertainment network like it were a race derby, backing the right horse while skedaddling from losing propositions.

In English theatre, it is corporations that prove to be excellent pay-masters, organising cultural outings for their workforce. This system of distribution is not entirely organised, and not all productions can ride the coattails of patronage or lucky breaks. A trickle of sporadic outings do often tip over into profits, but the long-running musical spectaculars, of late, have shown the potential efficacy of an international model in which a season of several shows might also find ample takers.

In 2001, the well-regarded stage and film director Paresh Mokashi launched what was to become a ‘superhit’ Marathi commercial play, running into over 500 shows. Mukkam Post Bombilwadi had a fairly uncommon premise, in which Adolf Hitler accidently finds himself in a coastal hamlet in Maharashtra, where a theatre troupe is preparing to stage a farce. Of course, the play lampooned the Führer as a harmless, genial buffoon rather than disavow his diabolical legacy, but Mokashi was able to draw comic gold from an ensuing mêlée, working with light political undertones and the classic trope of failure (where nothing seems to work).

The 2016 Ranga Shankara Festival in Bengaluru, whose theme ‘Not The Metros’ focussed on plays set outside cities, enabled contemporary auteur Mohit Takalkar to mount a remake of Mokashi’s play, titled Mukaam Dehru, Jilaa Nagaur, translated into a richly colloquial mix of Hindi and Marwadi by Jitendra Joshi, a member of the original cast. Although it was essentially a faithful remake, it was ironic to watch the ‘long distance’ humour of a proscenium play transposed into more intimate settings with just a handful of attendees in the audience at Prithvi Theatre. The staging of the same play in arguably different genres, however unintendedly, was clearly visible, with Takalkar ostensibly staging a broad farce as a ‘high art’ cultural artefact outside its context. 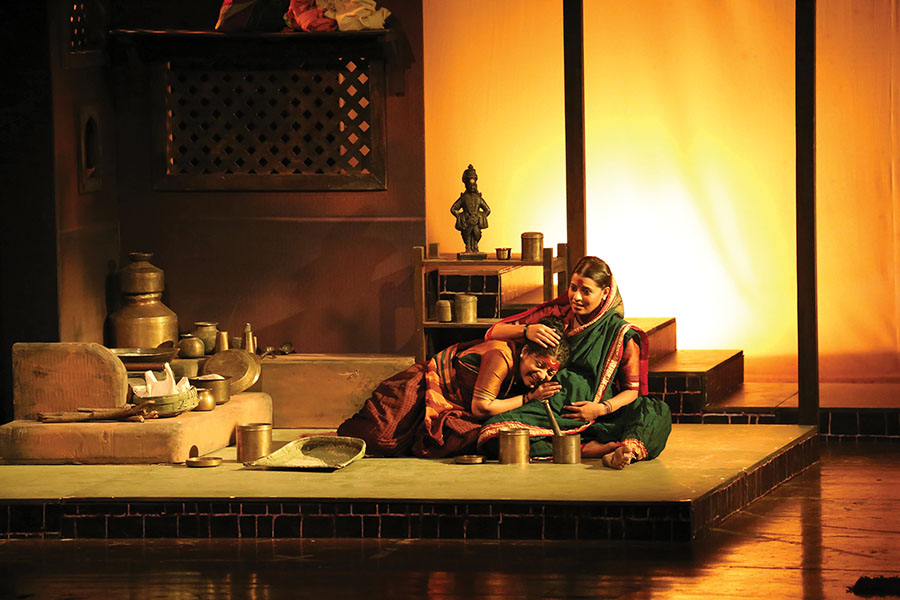 Scenes from Sangeet Devbabhali
A confluence of sensibilities in one play itself can be compellingly observed in Prajakt Deshmukh’s ‘sleeper’ success, Sangeet Devbabhali, which has notched up more than 125 shows since last December, and swept the intra-state Marathi awards season. The play is an intimate chamber-piece featuring two women—Tukaram’s beleaguered wife Avali (played by Shubhangi Sadavarte) and Rakumai (Manasi Joshi), the consort of Vitthal of Pandharpur, the object of Tukaram’s unstinting adoration. It is a nuanced production full of heart-warming moments of feminine solidarity, and the storytelling is interspersed with mellifluous abhangs rendered live.

The atypical minimalism on display is offset by its relative conservatism—the women remain devoted to their errant husbands—which perhaps explains its larger appeal to suburban middle-class audiences across Mumbai and Pune. A theatre veteran of 15 years, this is Deshmukh’s first bona fide commercial outing, which can be attributed to the fact that the play is backed by Bhadrakali Productions, the Marathi theatre powerhouse whose seminal Malwani comedy, Gangaram Gavankar’s Vastraharan, performed its 5,000th show in 2009.

The relative maturity of Marathi audiences have allowed commercial works such as these to rise to the surface, unlike the sex comedies and supper theatre entrées that pervade other circuits. The recent Marathi stage has seen a plethora of diverse offerings: Ratnakar Matkari’s three-act Indira, based on the last decade in the life of the former prime minister; Nipun Dharmadhikari’s time-travelling Amar Photo Studio, whose artlessness is wonderfully offset by bravura performances; Shivaji Underground in Bhimnagar Mohalla, a unflinchingly political play that improbably notched up its 700th performance recently; and Chandrakant Kulkarni’s ambitious mounting of Mahesh Elkunchwar’s Wada trilogy.

In the 1990s, the then-upcoming Kulkarni had directed the Wada trilogy as an eight-and-a-half-hour marathon which, although critically acclaimed, was deemed a ‘foolhardy venture’ that folded after 35-odd shows. This commercial revival is enjoying a remarkable run in comparison. He opened the first play in the trilogy, Wada Chirebandi, in 2014—it had crossed 100 shows in 2015—followed by Magna Talyakathi in 2016, and Yugant the following year, and now, all three plays are performed in a day-long marathon.

Meanwhile, the Broadway aspirations of the commercial stage continue to gain ground. There is no designated theatre district as such, although the stretch from Charni Road to Grant Road in Mumbai, given its historical antecedents when playhouses thrived at the turn of the last century, might well qualify. The Bharatiya Vidya Bhavan (established in 1938) and the Gokuldas Tejpal Hall, where the foundation stone of the Indian National Congress was laid in 1885, are creaking auditoriums in the vicinity that still cater to regional theatre.

Just a stone’s throw away, the refurbished art deco Royal Opera House and its stately environs have been home this year to spanking new productions from the Aadyam stable, the initiative from the Aditya Birla Group that brings in theatremakers from the experimental stage to create ‘big’ productions. It is a corporate subsidy model, and the bulk of its commissions haven’t seen independent runs beyond Aadyam-supported seasons. Exceptions include The Siddhus of Upper Juhu and 12 Angry Jurors from Rage Theatre, an already logistically sound theatre company, whose co-founder Shernaz Patel has taken over the curatorial reins at Aadyam this year.

Beyond Aadyam, as mentioned, musicals have literally taken the city by storm, and large investments have been poured into them. The bottom line has resolutely been entertainment, and every inch and pore of Disney India’s Alladin, for instance, is centred around the persuasive politics of appeal. While the producers tasted blood with 2015’s Beauty and the Beast, Alladin is even more crowd-friendly with the genie spouting colloquial Hinglish and the dynamic picturesque backdrops of Agrabah rivaling that of the Broadway production.

West End productions that toured Mumbai in recent years, like Perfect Nonsense, Million Dollar Quartet and Stomp, have demonstrated without doubt that city audiences were perfectly willing to shell out thousands of rupees for a single ticket. This has also meant that Disney’s homegrown fare remains out of reach for ordinary theatregoers, even while the more altruistic Aadyam prices its tickets much more competitively.

These apart, the National Centre for the Performing Arts’ co-production Mughal-e-Azam has been an Indian-style extravaganza earning a plenitude of footfalls over several seasonal runs, thanks to the enduring appeal of the K Asif film on which it is based, and the evergreen Naushad melodies sung live. 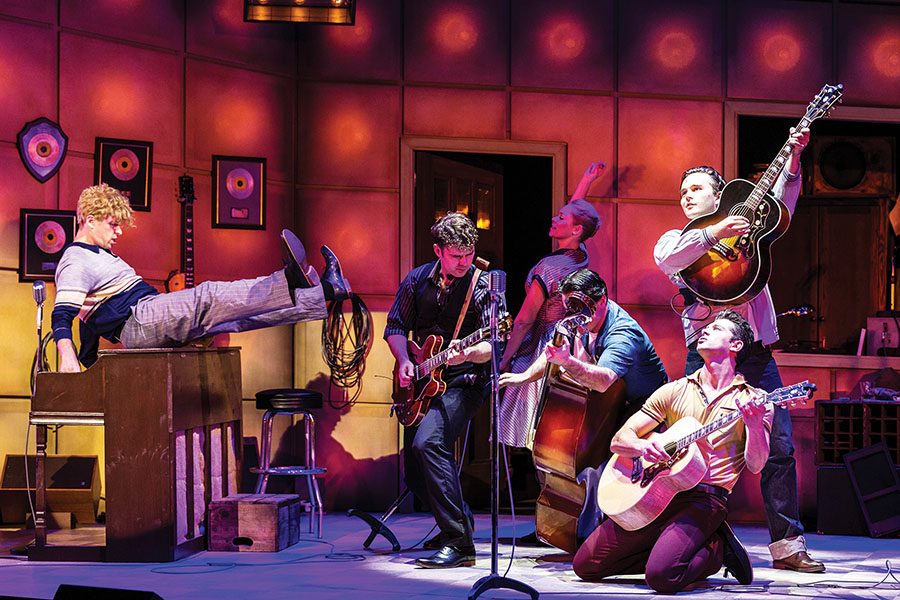 Scenes from Million Dollar Quartet
Yet the Hindi commercial stage isn’t completely a successful entity in its own right, with comedies and farces failing at the turnstiles as quickly as they crop up. Taking a cue from their long-running Zangoora at Gurgaon’s Kingdom of Dreams, Wizcraft opened Balle Balle!, dubbing it ‘The Big Fat Punjabi Wedding Musical’, at Mumbai’s Bal Gandharva Rang Mandir. They ran it on Thursdays and weekends only over two months but, for all appearances, didn’t generate the interest that might have sustained an extended run. But the market is still inchoate, and as an experiment it might well open the floodgates for future ventures. The same venue has hosted other plays hoping to hit pay dirt, like Coconut Theatre’s revival of Raavan ki Ramayan, featuring veteran bad guy Puneet Issar in a swashbuckling avatar prone to the fire and brimstone delivery so beloved of commercial ventures in Hindi.

Unlike the movie business, where box office tallies are now a customary feature of film reportage, theatre is an economy where trade figures are seldom revealed and attendance figures are jealously guarded. A production’s profitability can often be a matter of conjecture: Full houses could be populated by prized invitees or devoted kith and kin, and not just paying members of the public. That said, if a play runs into scores of shows, it is highly unlikely that its organisers are flogging a dead horse.

But more than the business side of things, the word ‘commercial’ carries the connotation of an entire sensibility (often as a pejorative), and an approach to performance and presentation that eschews the fine brush for broad strokes. Yet, the push and pull between the commercial and the artistic, even within such enterprises, provides us a window into a theatre scene that is no less credible in its own right. On more occasions than none, art might even lurch unapologetically alongside lucre, and perhaps not quite to its detriment. What is irrefutable perhaps is that commercial  theatre, for better or worse, is not monolithic, and is perhaps thriving on its own stage.