Why is the opposition to the UID scheme growing? 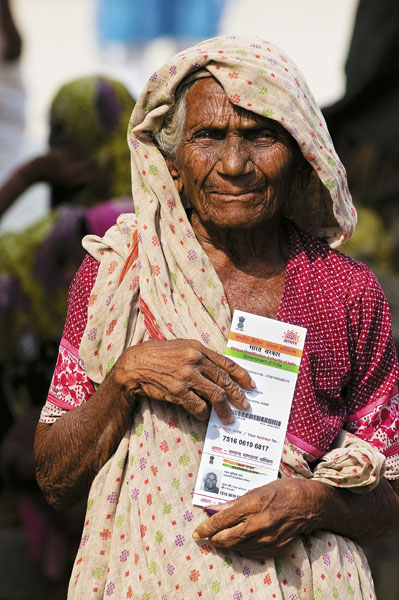 The unique identity (UID) numbers being issued with much fanfare have no legal sanctity. This may surprise many who casually know about the UID scheme and believe it represents a progressive and transparent new India.

The problem is, the Bill which proposes setting up an Authority mandated to issue such numbers was introduced in Parliament only in December 2010. This is yet to even face the routine Standing Committee scrutiny.

In the last three months, there has been opposition to the UID scheme. Leading the resistance are eminent academics and social activists, Jean Dreze and Aruna Roy. Both are members of the National Advisory Council headed by Sonia Gandhi.

What’s the Fuss About?
One of the main criticisms is the “unwarranted” hurry with which it has been put in motion.

“I don’t know how it has been established that UID is inevitable. Where was the debate regarding this?” asks Gopal Krishna, member of the Citizens Forum of Civil Liberties.

He points out that there has been no feasibility report or cost benefit analysis of the project in the public domain. Krishna’s main concern is the invasion of an individual’s privacy.

“The UID scheme will soon prove to be the key that leads to unifying many different databases and give the government agencies overwhelming powers of surveillance,” he says. Krishna asserts that the UID number will in time become the single common factor between various databases of a single person, allowing someone with malicious intent to compile a unified list.

The assertion that UID is “voluntary” is misleading, since in time it will become necessary to have a UID number if one wants to avail any service. Observers fear that such easy access with the government could lead to dangerous consequences. “In a situation like the Gujarat riots, profiling, and targeting a minority community could become extremely easy,” claims A.P. Shah, former chief justice of Madras and Delhi High Courts. 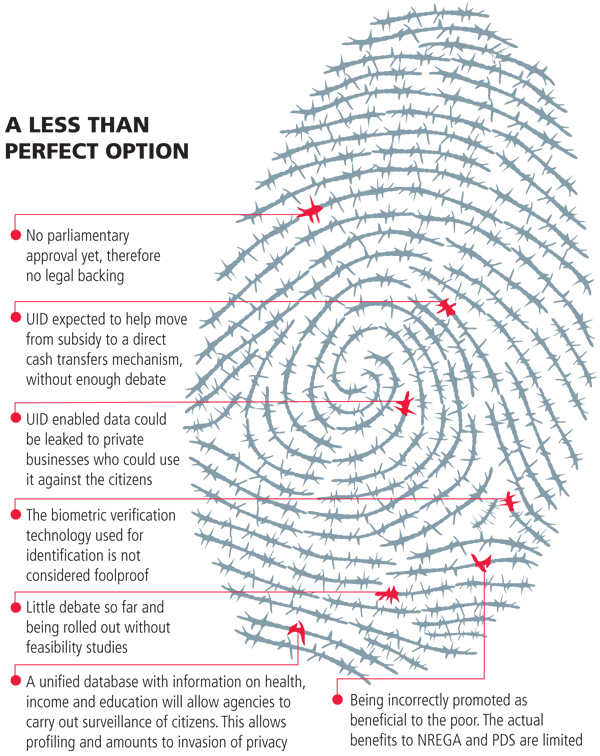 There are not enough laws that protect personal data from being abused.

People are questioning whether biometric technology is foolproof. In fact, even the Biometric Standards Committee of UIDAI looked unsure of it in the final analysis, stating: “First, retaining efficacy while scaling the database size from fifty million to a billion has not been adequately analysed. Second, fingerprint quality, the most important variable for determining de-duplication accuracy, has not been studied in depth in the Indian context.”

Others like Reetika Khera from the Centre for Development Economics, say that the government is misleading the people into believing that UID will provide solutions to the distortions in the National Rural Employment Guarantee Act (NREGA) Scheme and the Public Distribution System.

“The UIDAI’s [Unique Identification Authority of India’s] claims are bloated. There are almost no benefits of having a UID number in the functioning of NREGA and marginal benefits [like stamping out bogus ration cards] in PDS,” she says. The loopholes in these can be plugged by widespread computerisation and efficient monitoring, like exhibited in Tamil Nadu and Chhattisgarh. Yet, the government has chosen to focus on weeding out bogus cards by ensuring de-duplication.

According to Khera, UID seems to be a way to allow direct cash transfers a backdoor entry, again without debate. Actually, providing direct subsidy to the needy has been debated for over a decade now, but it has failed to take off due to lack of political support.

The Flip Side
The UIDAI did not respond to a detailed questionnaire, yet in a brief chat earlier, R.S. Sharma, mission director, explained that UIDAI has a specific mandate given to it by the union cabinet, to set up a system for the unique identification and authentication of each person residing in the country.

Responding to apprehensions raised by activists, Sharma said: “UID is an enabling service delivery platform. How fast various departments and entities, both at central and state level in the governments will leverage this platform for service delivery will depend on these departments and entities.” He refuted that UID is not useful in schemes like NREGA: “UID, in conjunction with other pieces like business correspondents, mirco-ATMs and telecom connectivity, would enable delivery of banking services to the rural population. People would thus be able to make basic banking transactions through their neighborhood kirana stores , functioning as BC. This will obviate the need for poor people like MNREGA workers, to cover long distances to withdraw cash from their bank accounts and lose a day’s salary in the bargain too.”

Our Take
It is instructive to look at developments in the UK and the US. Both tried to put in place a similar system. Last month, the UK repealed the Identity Card Act of 2006 which provided for identity cards linked to a National Identity Register. The Real ID Act of 2005 in the US failed to take off — most states refused to go along with it since it violated privacy. The Act proposed to use driver’s license-based ID cards to be monitored through computers.

In sum, it would be prudent if the government would focus on having a frank debate on the implications of UID and the changes required in the data protection regime to safeguard privacy and ensure smooth adoption of the scheme.