How an inclusive workplace can accelerate progress for women 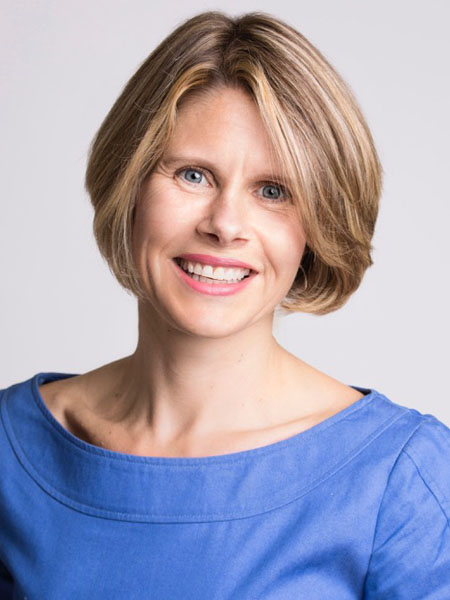 Q. You are known for your ongoing dedication to advancing inclusive workplaces. When did you first embrace this challenge?
About 10 years ago, when I was a partner at Spencer Stuart, I noticed that many of my clients were asking me to help them bring more female candidates to the table, at the Board and executive level. It quickly became clear to me that this was no easy task—both as it related to developing candidates and convincing board members and senior executives that a female candidate might be the best candidate. Soon after that, I took on the leadership of the firm’s Canadian Diversity Practice, where I was responsible for ensuring that we were putting forward diverse candidates, period. I actually co-led the search to place my predecessor, Deborah Gillis, in the role that I occupy today; Deborah has gone on to become the global CEO of Catalyst.

Q. Much has been said about the ‘business case’ for diversity and inclusion. How do you define it?
The big-picture answer is that at Catalyst, we see diversity of talent as being equal to diversity of thought; and if you are not tapping into 50 per cent of the workforce, you are clearly missing out on huge talent opportunities. On a more micro level, our research shows that having women in the boardroom and on executive teams is linked to better business results. Some of benefits we have seen through our research include stronger financial performance on core financial indicators; a greater ability to attract and retain top talent; more innovation and creativity; greater client insight; and better performance on non-financial indicators such as social responsibility, corporate reputation and productivity. We have found that all of these things correlate with having more women in positions of power.

Q. Currently, 65 per cent of Fortune 100 boards have 30 per cent board diversity, compared to just under 50 per cent of Fortune 500 companies—and the Canadian data is similar. What are these big companies doing differently?
Spencer Stuart publishes a Board Index annually, and there was some very encouraging news in the most recent edition: If you look at Canada’s 100 largest publicly-traded companies by revenue, over the past five years, they have moved the dial on female representation on their boards from 15 to 25 per cent, on average. That is substantial change among Canada’s 100 largest companies. On the flip side, 45 per cent of publically-traded companies in Canada did not have a single female board member in 2016.

So, what are the largest companies doing differently? A number of things. First, there is very intentional, active leadership on the topic of diversity and inclusion, and that is probably the number one, two and three reason for the progress we are seeing, because with such leadership comes greater focus and resources. There is also a growing belief in the business case. Frankly, these companies are also under greater scrutiny—whether it be regulatory or shareholder scrutiny—and increasingly, they are being asked about their plans from a diversity and inclusion perspective. All of these factors are leading to improved results. 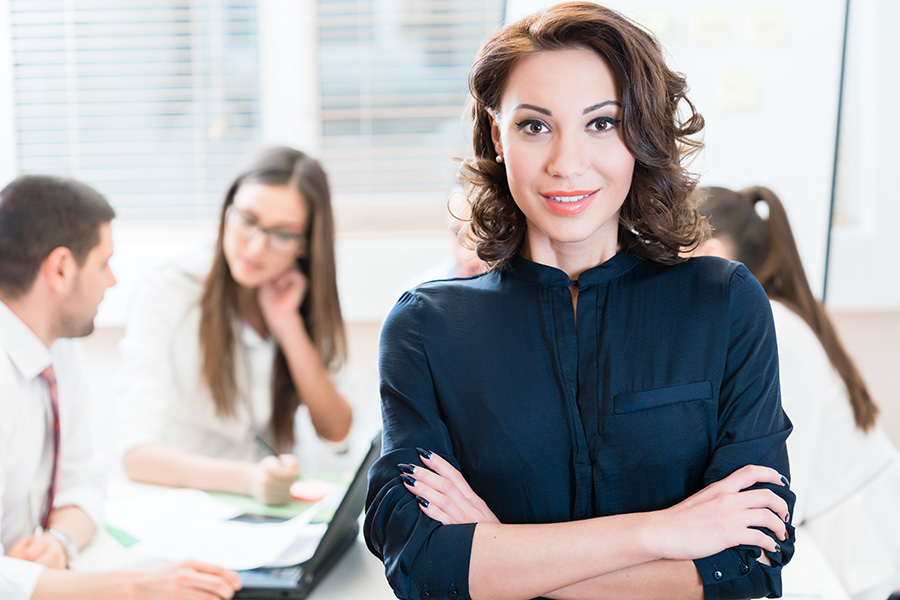 Q. In a recent study, Catalyst found that just one year out of an MBA program, women were earning $35,296, compared to $42,918 for men. What are the key implications of this gap?
Ensuring equal pay and opportunities for women and men boosts growth, promotes diversity and reduces economic inequality. That’s the most important thing, and that would be true whether we were talking about post-MBA grads or workers in the developing world. Simply put, income inequality is bad for any economy.

In the research you cite, just to put a fine point on it, we followed 3,345 post-MBA grads, and in addition to a substantial wage-gap, we found that women also, on average, started at a lower level than men after completing their MBA. This is problematic, because it has knock-on effects. The wage-gap starts out at $8,167 dollars, but it widens over time. If you layer on top of that the fact that woman generally get less access to ‘hot-jobs’, like profit-and-loss responsibilities and international assignments—jobs that get the attention of senior management—women tend to lower their ambitions and opt out over time.

When women leave the corporate sector, they often go into government, entrepreneurship or the non-profit sector, and when that happens, it is very difficult to re-attract them back to the corporate sector. At a broad economic level, this means that, in effect, we are building a lower-skilled workforce and we have a less robust workforce at a global level than we could have.

Q. BMO Financial Group won a 2017 Catalyst Award for its diversity and inclusion program. Describe its approach.
The only way to win that award is to have undertaken a significant initiative that shows sustainable progress over time. It can’t just be a one-off, one-year type of exercise. BMO has been working on this for many years, and they are a great Canadian story.

Q. Other leading companies, like Tata Motors, GE Healthcare and 3M,  have also been recognized by Catalyst. Talk a bit about the lessons they offer.
In the case of Tata, what stands out for me is that they have prioritized diversity and inclusion for a simple reason that applies to most organizations: Because they recognize that they have to start mirroring their customer base. In the retail car business, 75 to 80 per cent of purchase decisions are either made by, or are heavily influenced by, women. Tata realized that it did not have nearly the number of female sensibilities throughout its value chain that it needed. For them, that was the business case. They changed all of their processes, whether it was at the plant level or product development or the various technical roles, to bring in more woman because they wanted to mirror their customer base. That’s just smart business.

At GE-Healthcare, they were able to tie greater diversity—and in particular, gender diversity—to their ability to be more creative and innovative. They wanted to change up their brainstorming processes to be more disruptive, because that’s what CEO Jeff Immelt wanted. They believed that by bringing in and promoting women into different roles, they could achieve that, and they found that to be true.

Another interesting example is 3M. Their CEO Inge Thulin has spoken publicly about how they tie diversity and inclusion—in  particular, the promotion and advancement of women—to a doubling of their share-price in the last five years. He is very clear that this is not the only reason the share price doubled; but he believes that the market has looked at 3M’s practices around diversity and is rewarding it with a higher share price. He recognizes that expectations of 3M’s performance will continue to go up over time, but it is clear to him that this is one of the top five reasons for the company’s improved valuation.

Q. What is the best way to build a strong pipeline of diverse talent?
Fundamentally, you have to have a solid business model with great leadership, so that people will be attracted to what your company stands for. What is your corporate reputation? What is the reputation of the leaders of your organization? That is job one.

A second factor is, through our own millennial research, we are seeing that younger people really want some sense of purpose in their role. They want to see that what they’re doing is adding value to the world, beyond the walls of the company. As a result, being able to demonstrate that you are socially responsible will help you to attract better, more diverse talent.

Third, as far as the recruitment process goes, I would advise people to think more broadly. Take a look at the public sector, and maybe look to other countries for candidates. Then, ensure that you remove as much unconscious bias from your recruitment process as possible. If that means removing names from resumes, do it; ensure that you’ve got checks and balances in place.

Fourth, ensure that you’re offering the hottest job assignments to candidates beyond the usual suspects. Make sure that you are reaching down into the organization, looking for different ‘pockets’ of talent. And obviously, get rid of any wage-gaps that exist: Make sure there are clear accountability systems for eliminating wage gaps—and for having them not re-appear over time.

Q. Many people believe that we have hit a plateau in terms of the progress on gender-diverse leadership. Do you agree?
I don’t, actually. To return to the statistic I quoted at the beginning—regarding the movement of the top 100 companies in Canada, from an average female board representation of 15 to 25 per cent—I think progress is still being made. There is lots of work to be done, but I don’t believe we’ve flat-lined.

This type of change happens much more slowly than people would like. That’s why we need to be working inside organizations, identifying barriers and breaking them down in order to effect change. If anything, Canada is well positioned to be the global leader in terms of workplace diversity and inclusion, as it relates to gender and otherwise. Given the political climate today, the tone of our Federal and Provincial Governments and the will shown by our largest companies, I believe we can achieve that.

Tanya Van Biesen (Rotman MBA ’00) is Executive Director of Catalyst Canada, which she joined in October of 2016 after more than two decades of corporate leadership. She co-led the Financial Services Practice at Spencer Stuart and was a key member of the Canadian Boards Practice, focusing on executive search assignments. She also led the firm’s Canadian Diversity Practice, specializing in the placement of chief diversity officers and diverse slates of candidates across all search assignments. 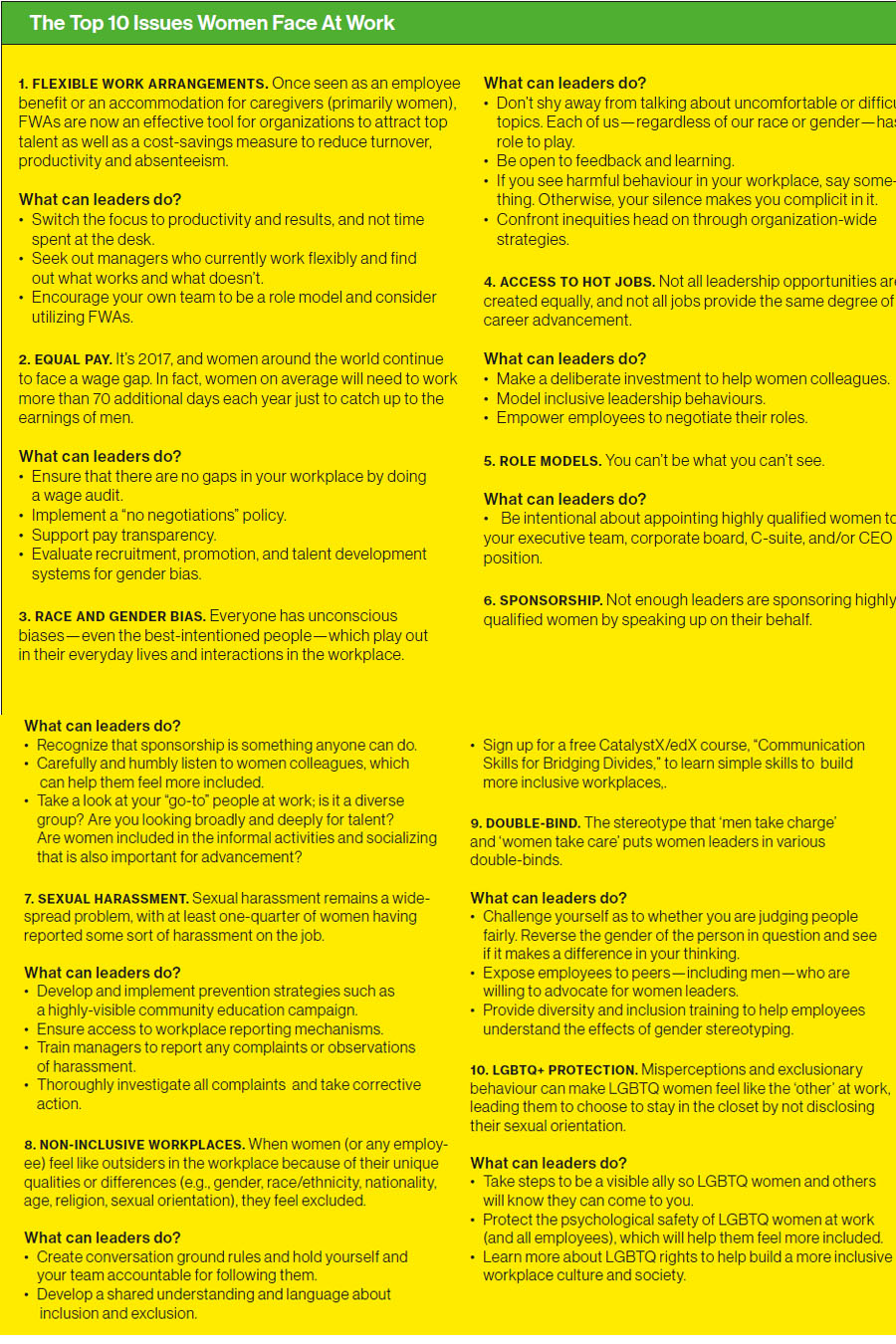