Why legacy companies and startups need each other

Jim Stengel, a marketing expert and author describes an approach to innovation that many large corporations are embracing. 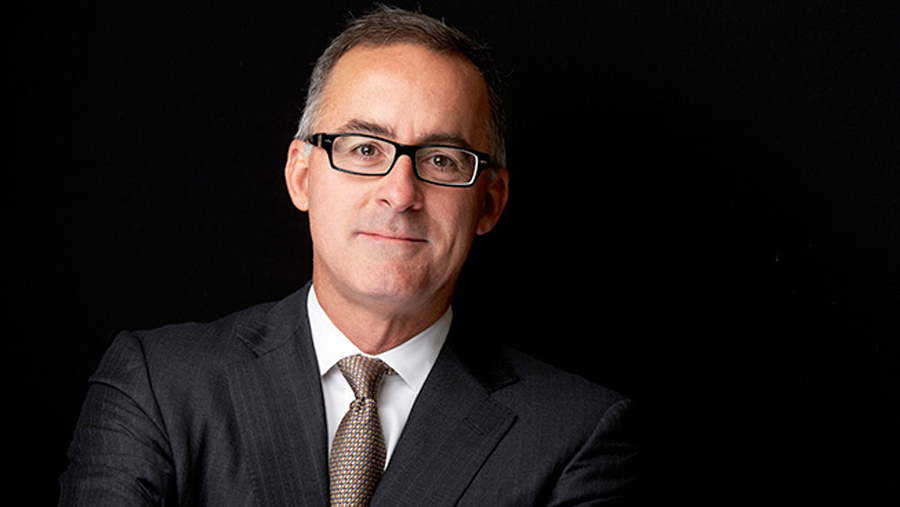 Q. You believe that many big, established corporations are in trouble. How so?
A few things are going on. First of all, many of these ‘legacy companies’ have failed to keep up with their customers. I was recently chatting with some of Facebook’s leaders, and even they said they’re having trouble keeping up with people. Things have been changing so quickly that lots of companies have fallen behind—in particular, many of the established consumer packaged-goods companies.

The second reason legacy companies are in trouble relates to the first: They have been far too rigid with their business models and haven’t been agile enough in reacting to change.  A third thing I would mention—and I’ve witnessed this in just about every firm I’ve worked with —is that the top leaders of legacy companies are spending their time on the wrong things. They are not nearly focused enough on what’s coming around the corner.  They fail to ask, ‘Given what’s coming, do we have the right talent in place? Is our strategy right? Are our executives spending enough time with customers?’ A recent article by Harvard’s Michael Porter showed that less than three per cent of the average CEO’s time is spent with customers—and 72 per cent of their time is spent in meetings. That’s a real problem. The last thing I would touch on is something that is well-documented among legacy companies, and that is their rampant short-termism. Former Rotman School Dean Roger Martin has been writing about this for years, and Warren Buffet and others have spoken out about it—but we haven’t broken the cycle yet.

The bottom line is that older brands need to acknowledge that the world has changed—and start acting more like start-ups. The good news is that most of these companies know they’re in trouble, and they’re trying to figure things out. That’s the first step in any transformation.

Q. In addition to acting like start-ups, you believe they should partner with start-ups.
More and more companies are beginning to interact with start-ups, establishing powerful new kinds of alliances. Those who don’t—and who continue to struggle on their own, repeating the same outdated habits—are literally gambling with their future. By working together, legacy companies and start-ups can learn a great deal from each other. Start-ups can teach older companies how to move faster, take more risks and learn from failure. On the flipside, established companies can teach start-ups how to build a brand that fosters a lasting emotional bond and how to set up an organization to support global expansion. Bridging the different worlds and experiences of young and old companies might actually turn out to be one of the keys to surviving in an increasingly complex world. 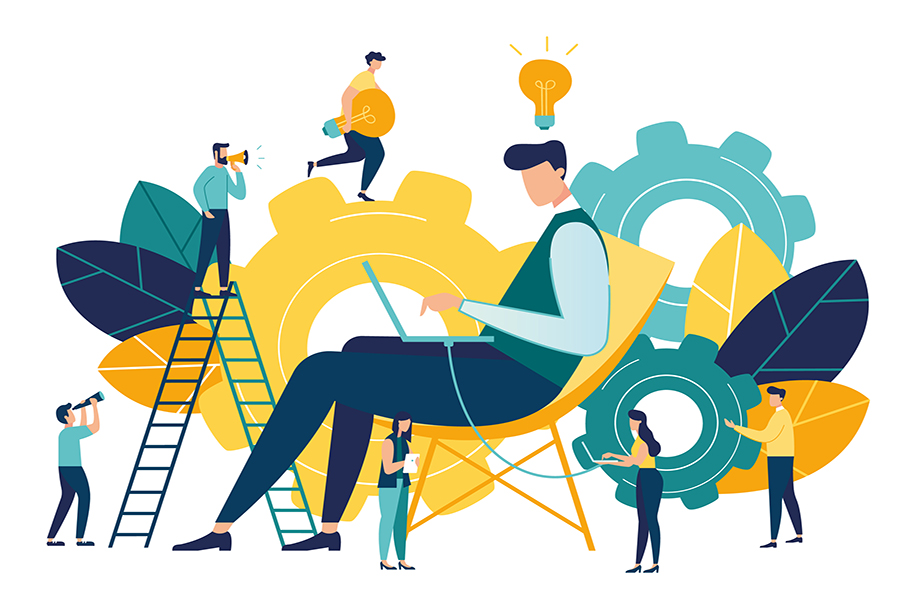 Q. What do these partnerships look like?
There are a few interesting models out there. Motorola Solutions—the public safety technology company created when Motorola split in two—has been partnering with a bunch of start-ups on ventures that are often outside of its areas of expertise. For instance, it recently started setting up an incubator in Israel to stay on top of the latest tech trends. And Wells Fargo, which was established 165 years ago, has its own in-house accelerator that selects dynamic young financial technology companies to work with to develop products that push the frontiers of financial security and customer service. The head of its innovation admitted to me that some of the best ideas come from start-ups.

Q. You argue that such partnerships are replacing traditional acquisitions. Why is that?
Partnerships allow an older company to acquire expertise in a particular area or to add to a line of business. But a lot of these companies use partnerships with start-ups to ‘fish in new waters’ and see what the tides kick up. The most forward-looking legacy companies are trying to remake themselves from within, relying on young companies to teach them some basic lessons in how to innovate better, take smart risks, develop new products quickly and draw the best and brightest employees and customers to the company. Many of the executives I spoke with now treat acquisitions as more of a last resort. 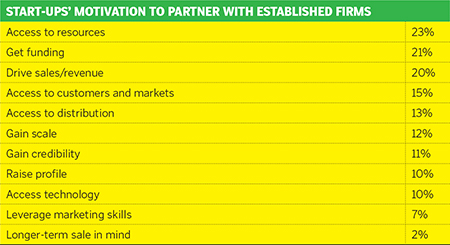 Q. In addition to partnering with start-ups, you found that some of the most successful legacy businesses routinely ‘blow themselves up’. Please explain.
Dell is one company that has gone through cataclysmic change. It quickly became an iconic company when it started out, but then it got into a lot of trouble. All of a sudden it went private and made some enormous acquisitions. Since it rebooted itself, its bottom line has been growing and the organization is much healthier, because its leaders are spending more of their time on the right things. It recently announced that it might go public again, or at least make some of its shares available to the public. Adobe is another example that proactively blew up its own successful model. It used to sell its software discs packaged in cellophane-wrapped boxes, but a few years back, it suddenly stopped doing that and began offering its services in the cloud. That is a case study of outstanding business transformation.

Sometimes—as with Dell and Adobe—the change is cataclysmic, and other times, it’s more elegant and subtle. If you look at companies like IBM, Levis and Estée Lauder—all iconic legacy companies—they are really turning their models upside down. They’re doing this very deliberately, strategically and extremely well. Slowly and elegantly, they are becoming very different companies.

The smartest companies realize that nobody has a monopoly on ideas, and there are some incredible ideas out there. They find a way to filter through all of that and find people to work with that are complimentary to them and that can enhance their strategy to win in the future.

Q. On that note, your alma mater, Procter & Gamble, was known for creating innovative new products like the Swiffer in the early 2000s, but it’s been a while. What was happening at P&G then that isn't happening there now?
In the late 1990s and early 2000s, there was a huge commitment to innovating outside of the company’s established categories. P&G was a pioneer in developing a venture fund internally to fund innovative ideas, and it also actively looked externally for ideas. There was a dedicated group figuring out how they could solve new problems, get into new categories and even create categories. The CEO at the time [A.G. Lafley] was obsessed with disruptive innovation.

Over time, that dedicated group and its funding were reduced, and resources were transferred to the business units.  Certainly, we are still seeing great innovation in the company’s baby care, feminine care and fabric care products, but it’s typically more incremental innovation versus creating whole new categories. Interestingly, they seem to be going back to that earlier strategy in some ways; but it takes a while to get the disruptive innovation wheel spinning.

Q. Talk a bit about how General Mills and General Electric have embraced start-ups.
When I studied them, these companies were at different points on the continuum when it came to scaling the lessons of entrepreneurs across the enterprise. General Electric has recently been in a dramatic freefall—and truth be told, I didn’t see that coming. When I was doing my research, I saw a company that was ‘all in’ in terms leveraging the power of partnerships to help it recreate itself. It was working with something like 100 start-ups at the time.  I do believe they will get through this tough period, because the choices they are making are good ones.

General Mills took a different approach, creating a new-product incubator, 301 INC, in-house. However, it eventually hit a brick wall and was unable to create new businesses at the pace it needed to. As one of its innovation leaders told me, they weren’t able to ‘out-entrepreneur’ what was happening in the marketplace.

However, the team didn’t give up. Instead, 301 INC became an in-house venture group, and it rapidly invested in a handful of start-ups, including Good Culture (an organic, high-protein ‘redo’ of cottage cheese) and Rhythm Superfoods (kale chips, beet chips and other ‘nutrient-dense’ snacks.) General Mills contributes by developing their sales channels, creating consistency in product quality and building marketing strategies.

Aside from testing new product extensions, General Mills is enabling some important learning when it brings these start-ups into the organization. For instance, executives are starting to understand what it is about their culture that drives start-ups nuts—like the glacial pace of getting things done.

Q. Clearly, there is more than one way to engage with start-ups. Which is the best approach?
I wouldn’t say that one is better than the other; we can learn from each of them. Personally, I’ve been impressed with Motorola Solutions, which is not in the headlines much anymore because its customers are now primarily public safety organizations, first responders and the military. But they have an extremely coherent and consistent way of partnering with start-ups that are important to their strategy, going forward. They know precisely which areas they want to compete and win in, and they pursue these few areas with great energy.

One start-up they work with is Eyefluence, which focuses on virtual reality and augmented reality eye control. When the CTO of Motorola met its founders, he wasn’t interested in eye-tracking per se—but it suddenly occurred to him: ‘Holy crap, that’s the answer; I can use my eyes as a mouse.’ His next thought: if I can put that together with a head-worn display, now I’ve solved a problem for my customers.’ Police officers and firefighters often need to have their hands free, and he saw an opportunity to go out and test the Eyefluence’s capabilities with his own customers. That’s a powerful way to innovate.


Jim Stengel is the co-author of Unleashing the Innovators: How Mature Companies Find New Life with Start-ups (Crown Business, 2017). He is the former Global Marketing Officer at Procter & Gamble, where he worked for 25 years.