3 Global Indians to Watch For 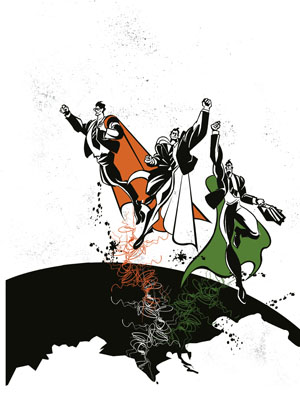 Nikki Haley
When Nimrata Randhawa, a.k.a. Nikki Haley, won the race for governorship in South Carolina, she wasn’t the first Indian-origin person to become governor of a US state. That was Piyush Amrit Jindal, a.k.a. Bobby Jindal, who became governor of Louisiana in 2007. But after battling allegations of marital infidelity and insufficient Christianity (she, like Jindal, converted to Christianity after moving to the US), her election now seems part of a broader trend — the rise of Indian-origin people in the US’s political setup. Others include California’s attorney general Kamala Harris; state-level Congressmen Prasad Srinivasan and Janak Joshi; and Swati Dandekar, Iowa senator. If Haley can prove her mettle, who knows, we might see non-Christian or as-originally-named Indian-origin people being accepted by US voters based on merit alone.


Divya Narendra
We don’t know if Mark Zuckerberg stole the concept of Facebook from Narendra, the son of Indian migrant doctors. But he and his friends, Tyler and Cameron Winklevoss, won a $65 million-settlement from Facebook in 2008. Now, they are seeking significantly more damages (estimates suggest between $400 million and $600 million) on the claim that Zuckerberg showed them a lower valuation for Facebook. If Narendra, CEO of SumZero, a social network for stock investors, wins the case, he’ll be the Sabeer Bhatia 2.0 that Indian media has been desperately seeking since Hotmail was sold to Microsoft.

Sanjay Jha
In 2008, he shot to fame as the highest paid CEO in the US, earning over $100 million annually. But 2011 could be the year Jha convinces Motorola investors that he was worth it. Jha joined Motorola as co-CEO and proceeded to do an open heart transplant on the ailing company, replacing its tired, one-hit wonder (remember the Razr?) heart with a spanking new Google Android-powered one. Motorola’s Droid smartphones are one of the bestselling Apple iPhone alternatives in the US. Google recently showcased a widely anticipated Android version, Honeycomb, running on a Motorola tablet set for a 2011 release. A lot of people, including us, are going to be watching Motorola Mobility, the name for Jha’s business once it’s spun out in January 2011 from Motorola.