At Saudi Aramco, changes at the top point to a coming IPO

By taking Aramco public, the crown prince will be able to raise money to pay for a sweeping overhaul of his kingdom's economy. And selling even a small portion of Aramco's stock on a public market—the kingdom is considering the sale of about 5% of Aramco's overall shares—could raise tens of billions of dollars 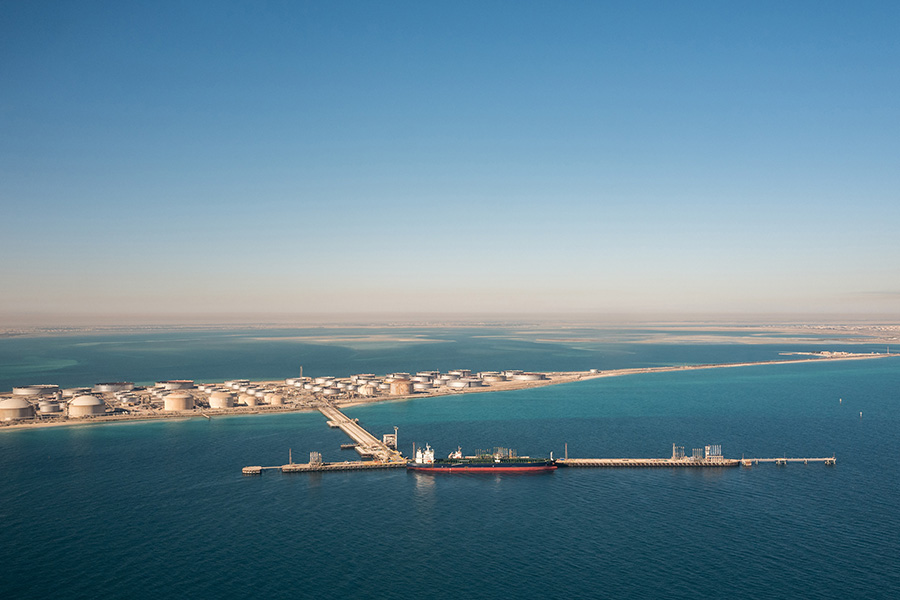 FILE -- A tank farm for oil products in Dhahran, Saudi Arabia, Jan. 11, 2018. Khalid al-Falih, Saudi Arabia's energy minister and the chairman of Saudi Aramco, the state-owned oil giant, was removed from his post at the company by the Saudi government on Sept. 2, 2019, providing another sign that the company is moving aggressively to resume work on what would likely be the world’s largest initial public offering of stock. (Christophe Viseux/The New York Times)

LONDON — A shake-up at the top of Saudi Arabia’s state-owned oil giant, Saudi Aramco, this week is another sign that the company is moving aggressively to resume work on what would likely be the world’s largest initial public offering of stock.

Aramco’s chairman, Khalid al-Falih, who is also the country’s energy minister, was removed from his post at the company by the Saudi government on Monday.

The change eliminates — at least superficially — the issue of having the same person run both the oil company, the world’s biggest, and Saudi’s energy ministry. This was a concern voiced by some investors this year when Aramco sold about $12 billion in bonds, in its first entry into the public capital markets.

Analysts say that al-Rumayyan, who has spent most of his career as a banker, may bring a more finance-driven approach to the company than al-Falih, a former Aramco chief executive with an engineering degree who represents Saudi Arabia at OPEC meetings.

al-Rumayyan, 49, will look at Aramco simply as “an asset to manage; Khalid sees this as a company that is critical to the economy,” said Ayham Kamel, the head of Middle East and North Africa research at the political risk firm the Eurasia Group. In other words, al-Rumayyan may find it easier than al-Falih to make changes at the company, which has managed to preserve a substantial degree of independence despite government ownership.

By taking Aramco public, the crown prince will be able to raise money to pay for a sweeping overhaul of his kingdom’s economy. And selling even a small portion of Aramco’s stock on a public market — the kingdom is considering the sale of about 5% of Aramco’s overall shares — could raise tens of billions of dollars.

Aramco unexpectedly pulled back its IPO plans a year ago, at a time of low oil prices, and instead decided to pursue a stake in Sabic, a huge Saudi chemical producer controlled by the country’s Public Investment Fund.

Any momentum toward an offering evaporated after the killing and dismemberment of Jamal Khashoggi, a Saudi dissident and Washington Post columnist who disappeared after entering the Saudi consulate in Istanbul last October. Crown Prince Mohammed was implicated in the killing by U.S. intelligence officials and a United Nations inquiry.

But the plan was revived, and last month the company’s chief financial officer told investors that it was prepared for a stock listing. The company had already been increasing its financial openness and clarity for the sake of international investors. The suggestion that it was ready for a public offering came during its first-ever earnings call.

The renewed interest in an IPO suggests that the crown prince thinks that the storm of controversy over Khashoggi’s killing is passing and that he is ready to move ahead with his plans.

The Public Investment Fund, which al-Rumayyan will continue to lead, would most likely receive proceeds from any Aramco stock that the Saudi government holds. The fund is turning into a “kind of national development bank” for carrying out the crown prince’s projects, said Karen Young, a resident fellow at the American Enterprise Institute, a research firm based in Washington.

Aramco still needs to decide where to list the company, potentially a huge trophy for any exchange. To Aramco and the Saudis, the choice of where to list the stock is in many ways the more important part of the IPO process, some observers say.

“It is not just about financial results,” said David Buck, a Houston-based partner at the law firm Sidley Austin, who specializes in oil company work. The terms of the public offering, including Aramco’s choice of an exchange, he said, will be “a commentary on both the company and the country.”

Aramco has said that it wants to float its stock on both Saudi Arabia’s stock exchange in Riyadh, known as the Tadawul, and a major international market. The Saudi exchange has been fortifying its technology resources to handle the huge amount of trading that an Aramco listing would bring.

What has drawn the most attention is where Aramco will choose to list its shares outside the Middle East. But amid the choices are potential pitfalls for the company.

Among the major exchanges vying to host Aramco:

— The New York Stock Exchange, which is the biggest exchange in the world by market capitalization, and which Prince Mohammed has favored for its prestige. (President Donald Trump in 2017 publicly pushed Aramco to choose the Big Board as well.) But IPO advisers have warned that listing Aramco in the United States could leave the Saudi government vulnerable to lawsuits over the Sept. 11 terrorist attacks and more.

— The London Stock Exchange also has plenty of liquidity, and its executives recently courted Saudi officials as part of a British delegation to Jeddah. The exchange also relaxed rules for state-controlled companies in what critics said was a clear appeal to Aramco. But the continuing uncertainty over Britain’s departure from the European Union may be casting a cloud over London’s chances.

— The Hong Kong Stock Exchange has also changed its rules in ways that benefit companies like Aramco. It has also promoted what it calls “primary connect” links to mainland China, which help major financial institutions in China invest in offerings staged in Hong Kong. But turmoil over the protests that have torn the territory in recent months may continue, raising questions about the exchange’s appeal.

— The Tokyo Stock Exchange is the third-biggest in the world by market capitalization, after the Nasdaq, and Aramco has a number of ties with Japan. Tokyo is the home of SoftBank, the Japanese technology giant that has partnered with the Saudis on an array of projects, notably the roughly $100 billion Vision Fund technology investment venture. (al-Rumayyan also sits on SoftBank’s board.) Aramco provides about one-third of Japan’s crude oil needs, the company says. But the Tokyo exchange does not have the same sort of profile as the New York, London and Hong Kong exchanges.

Tweets by @forbes_india
Markets soar on news of China talks, but hopes for progress are low
'What We Built is Sustainable, Not Glamorous': Stuart Crighton of Cleartrip