A senior engineer said the company had rejected a safety system to minimise costs, equipment that he felt could have reduced risks that contributed to two fatal crashes 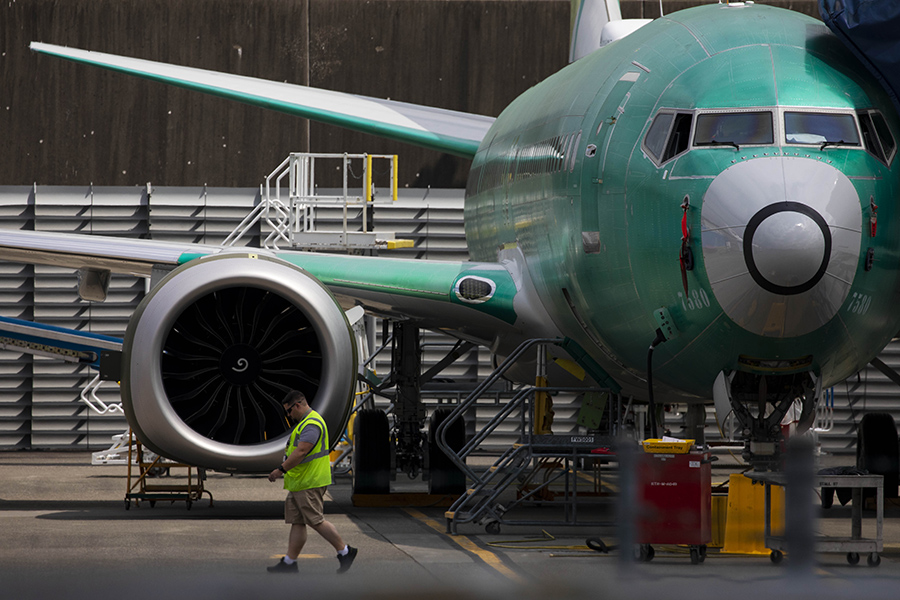 A Boeing 737 Max 8 plane at the Boeing Plant in Renton, Wash., May 29, 2019. A senior Boeing engineer filed an internal ethics complaint this year saying that during the development of the 737 Max jet the company had rejected a safety system to minimize costs, equipment that he felt could have reduced risks that contributed to two fatal crashes. Image: Ruth Fremson/The New York Times

A senior Boeing engineer filed an internal ethics complaint this year saying that during the development of the 737 Max jet the company had rejected a safety system to minimize costs, equipment that he felt could have reduced risks that contributed to two fatal crashes.
Boeing has provided the complaint, which was reviewed by The New York Times, to the Department of Justice as part of a criminal investigation into the design of the Max, according to a person with knowledge of the inquiry who requested anonymity given the ongoing legal matter. Federal investigators have questioned at least one former Boeing employee about the allegations, said another person with knowledge of the discussions, who similarly requested anonymity. It is unclear what, if any, assessment investigators have made of the complaint. The complaint, filed after the two crashes, builds on concerns about Boeing’s corporate culture, as the company tries to repair its reputation and get the planes flying again. Many current and former Boeing employees have privately discussed problems with the design and decision-making process on the 737 Max, outlining episodes when managers dismissed engineers’ recommendations or put a priority on profits. The engineer who filed the ethics concerns this year, Curtis Ewbank, went a step further, lodging a formal complaint and calling out the chief executive for publicly misrepresenting the safety of the plane. During the development of the 737 Max, Ewbank worked on the cockpit systems that pilots use to monitor and control the airplane. In his complaint to Boeing, he said that managers were urged to study a backup system for calculating the plane’s airspeed. The system, known as synthetic airspeed, draws on several data sources to measure how fast a plane is moving. Such equipment, Ewbank said, could detect when the angle-of-attack sensors, which measure the plane’s position in the sky, were malfunctioning and prevent other systems from relying on that faulty information. A version of the system is used on Boeing’s 787 Dreamliner, a new model of plane. Ewbank did not respond to requests for comment. In both crashes of the Max, an angle-of-attack sensor is believed to have failed, sending bad data to automated software designed to help prevent stalls. That software, known as MCAS, then activated erroneously, sending the planes into irrecoverable nose dives. Ewbank noted in the complaint, “It is not possible to say for certain that any actual implementation of synthetic airspeed on the 737 Max would have prevented the accidents” in Ethiopia and Indonesia. But he said that Boeing’s actions on the issue pointed to a culture that emphasized profit in some cases, at the expense of safety. Throughout the development of the Max, Boeing tried to avoid adding components that could force airlines to train pilots in flight simulators, costing tens of millions of dollars over the life of an aircraft. Significant changes to the Max could also have required the more onerous approval for a new plane, rather than the streamlined certification process for a derivative model. According to Ewbank’s complaint, Ray Craig, a chief test pilot of the 737, and other engineers wanted to study the possibility of adding the synthetic airspeed system to the Max. But a Boeing executive decided not to look into the matter because of its potential cost and effect on training requirements for pilots. “I was willing to stand up for safety and quality, but was unable to actually have an effect in those areas,” Ewbank said in the complaint, adding, “Boeing management was more concerned with cost and schedule than safety or quality.” His account, and the description of the system’s benefits on the 787 Dreamliner, was backed up by a former senior Boeing employee involved in the discussions who spoke on the condition of anonymity because of the continuing Justice Department investigation. The former Boeing employee, who worked on the Max, confirmed that executives had discussed the system. The employee said they had determined that trying to install such new technology onto the 737 Max, a plane based on a 1960s-era design, would be too complicated and risky for the project, which was on a tight development schedule. But the former Boeing employee said that Ewbank’s complaint overstated the importance of such a system and understated the complexity of adding it to the 737 Max. This employee said that Boeing had only installed the system on the 787 Dreamliners, noting that it was unclear how or whether the Max could similarly calculate synthetic airspeed, because it has fewer sensors. The employee also did not recall Boeing executives citing the potential effect on pilot training when deciding not to study adding the system. A company spokesman, Gordon Johndroe, said in a statement, “Boeing offers its employees a number of channels for raising concerns and complaints and has rigorous processes in place, both to ensure that such complaints receive thorough consideration and to protect the confidentiality of employees who make them.” Boeing’s chief executive, Dennis A. Muilenburg, said in a speech Wednesday that “it is critical we take a step back to humbly look at our culture.” “We’re taking action as a result of the accidents to reinforce our values of safety, quality and integrity because we know we can always do better,” Muilenburg said at the Economic Club of New York.

Tweets by @forbes_india
Artificial intelligence for the perplexed executive
The online ad world is murky. These companies want to fix it