Could a grocery 'happy hour' save global food wastage?

Food that is nearly unsellable goes on sale at every one of S-market's 900 stores in Finland, with prices slashed to 60 percent off at exactly 9 p.m. It's part of a campaign to reduce food waste in the hopes of drawing in regulars, like any decent bar—could this be a model for the rest of the world? 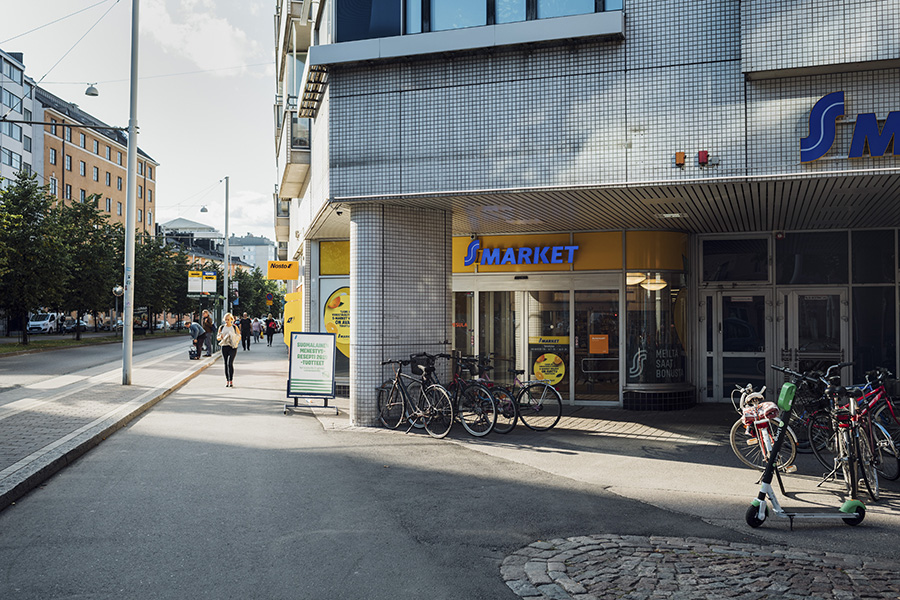 The S-market in the Vallila neighborhood in Helsinki, Aug. 22, 2019. About one-third of the food produced and packaged for human consumption is lost or wasted, according to the Food and Agriculture Organization of the United Nations, and scientists say all excess food contributes to climate change. (Juho Kuva/The New York Times)

HELSINKI, Finland — “Happy hour” at the S-market store in the working-class neighborhood of Vallila happens far from the liquor aisles and isn’t exactly convivial. Nobody is here for drinks or a good time. They’re looking for a steep discount on a slab of pork. Or a chicken, or a salmon fillet, or any of a few hundred items that are hours from their midnight expiration date.

Food that is nearly unsellable goes on sale at every one of S-market’s 900 stores in Finland, with prices that are already reduced by 30% slashed to 60% off at exactly 9 p.m. It’s part of a two-year campaign to reduce food waste that company executives in this famously bibulous country decided to call “happy hour” in the hopes of drawing in regulars, like any decent bar.

“I’ve gotten quite hooked on this,” said Kasimir Karkkainen, 27, who works in a hardware store, as he browsed the meat section in the Vallila S-market. It was 9:15 and he had grabbed a container of pork miniribs and two pounds of shrink-wrapped pork tenderloin.

Total cost after the price drop: the equivalent of $4.63.

About one-third of the food produced and packaged for human consumption is lost or wasted, according to the Food and Agriculture Organization of the United Nations. That equals 1.3 billion tons a year, worth nearly $680 billion. The figures represent more than just a disastrous misallocation of need and want, given that 10% of people in the world are chronically undernourished. All that excess food, scientists say, contributes to climate change.

From 8 to 10% of greenhouse gas emissions are related to food lost during harvest and production or wasted by consumers, a recent report by the Intergovernmental Panel on Climate Change found. Landfills of rotting food emit methane, a gas that is roughly 25 times more harmful than carbon dioxide. And to harvest and transport all that wasted food requires billions of acres of arable land, trillions of gallons of water and vast amounts of fossil fuels. 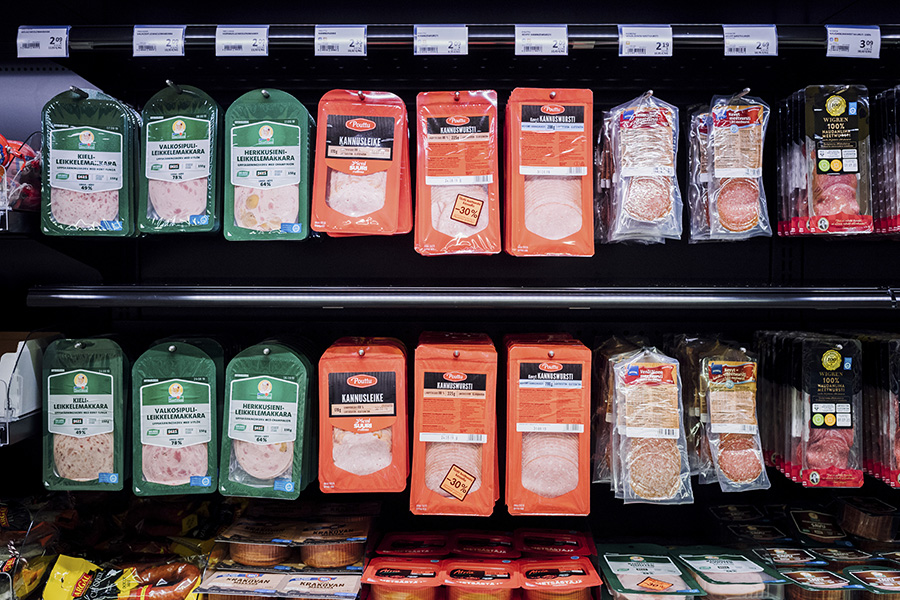 A variety of marked-down food items at the S-market in the Vallila neighborhood in Helsinki, Aug. 22, 2019. Food that is nearly unsellable goes on sale at every one of S-market’s 900 stores in Finland, with prices that are already reduced by 30 percent slashed to 60 percent off at exactly 9 p.m. as part of a two-year campaign to reduce food waste. (Juho Kuva/The New York Times)

For consumers, cutting back on food waste is one of the few personal habits that can help the planet. But for some reason, a lot of people who fret about their carbon footprint aren’t sweating the vegetables and rump steak they toss into the garbage.

“There’s been a lot of focus on energy,” said Paul Behrens, a professor in energy and environmental change at the University of Leiden in the Netherlands. “But climate change is as much a land issue and a food issue as anything else.”

Reducing waste is a challenge because selling as much food as possible is a tried, tested and ingrained part of all-you-can-eat cultures. Persuading merchants to promote and profit from “food rescue,” as it is known, is not so obvious.

“Consumers are paying for the food, and who wants to reduce that?” said Toine Timmermans, director of the United Against Food Waste Foundation, a nonprofit in the Netherlands composed of companies and research institutes. “Who profits from reducing food waste?”

A growing number of supermarkets, restaurants and startups — many based in Europe — are trying to answer that question. The United States is another matter.

“Food waste might be a uniquely American challenge because many people in this country equate quantity with a bargain,” said Meredith Niles, an assistant professor in food systems and policy at the University of Vermont. “Look at the number of restaurants that advertise their supersized portions.”

Nine of the 10 U.S. supermarket chains that were assessed by the nonprofit Center for Biological Diversity last year were given a C grade or lower on food waste issues. Only Wal-Mart did better, largely for its efforts to standardize date labels and to educate staffers and customers.

Some of the most promising food waste efforts are apps that connect food sellers to food buyers. Think Tinder, except one party in this hookup is a person and the other is an aging loaf of bread.

Among the most popular is Too Good to Go, a company based in Copenhagen, with 13 million users and contracts with 25,000 restaurants and bakeries in 11 countries. Consumers pay about one-third of the sticker price for items, most of which goes to the retailer, with a small percentage paid to the app.

In Denmark, food rescue has attained the scale and momentum of a cultural movement, one with its own intellectual godmother: Selina Juul, a graphic designer who immigrated from Russia at the age of 13.

“I came from a country where there was a fear that we wouldn’t have food on the table tomorrow, where there were food shortages,” she said in a phone interview. “When we emigrated, I had never seen so much food. I was shocked. Then I was shocked again when I saw how much food people wasted.”

In 2008, at the age of 28, she started a Facebook group called Stop Wasting Food. Within weeks, she was being interviewed on the radio. Soon after that, she came to the attention of Anders Jensen, buying director at REMA 1000, the largest supermarket chain in Denmark.

“I was on a business trip to Scotland and I read about Selina in a newspaper,” Jensen recalled. “Around that time, we learned that every Dane was throwing out 63 kilos of food per year” — about 139 pounds — “and I was sitting in this airport thinking, ‘she’s right.’”

After the two met in a Copenhagen cafe, REMA 1000 eliminated in-store bulk discounts. As of 2008, there would be no more three hams for the price of two, or any variations on that theme.

“It exploded in the media because it was the first time a retailer said, ‘It’s OK if we sell less,’” Jensen said.

REMA 1000 and Juul recognize that there is a limit to how much one company can do to reduce waste. Consciousness-raising was necessary. So Juul has enlisted famous Danes to join her cause.

She’s co-writing a book on cooking with leftovers with Princess Marie, who worked in advertising and marketing before marrying into the Danish royal family. Celebrity chefs, like Rene Redzepi, have spread the word. Mette Frederiksen, the current prime minister, even made it a campaign issue this year.

In Finland, reducing food waste has yet to become a political issue, but it is a selling point for at least one restaurant. Every dish on the menu of Loop, which is housed in a former mental hospital in Helsinki, is made from past-due ingredients donated by grocery stores and bakeries. Donations vary, so Loop’s chefs have no idea what they’ll be making until they walk into the restaurant’s kitchen.

“It’s like an episode of ‘Master Chef’ every day,” said Johanna Kohvakka, founder of the nonprofit From Waste to Taste, which operates Loop. “But we try to make every dish look great so that people can share images online and say, ‘This was about to be wasted.’”

Kohvakka says Loop turns a profit and could serve as a model for similar ventures. Executives at S-market in Finland make no such claims about their happy hour. Mika Lyytikainen, an S-market vice president, explained that the program simply reduces its losses.

“When we sell at 60% off, we don’t earn any money, but we earn more than if the food was given to charity,” he said. “On the other hand, it’s now possible for every Finn to buy very cheap food in our stores.”

It’s not unusual to find groups of S-market shoppers milling around with soon-to-be-discounted items from the shelves and waiting for the clock to strike at 9. “I’ve done that,” Karkkainen said, as he headed for the exits with his pork miniribs.

Other Finns, it seems, haven’t fully embraced S-market’s anti-waste ethos. Harri Hartikainen, 71, was shopping one evening in Vallila and considered a 60% off box of Kansas City-style grilled chicken wings.

“I’ve never tried these before,” he said, dropping them into his shopping basket. “But it’s so cheap, if I don’t like it, I can just throw it out.”

Tweets by @forbes_india
Go Team! Why teams go wrong and how to set them straight
As new faces emerge, Serena Williams gets acquainted with failure