The survey, carried out with EY as the knowledge partner, shows that manufacturing, healthcare and pharma sectors actually expanded despite the disruptions 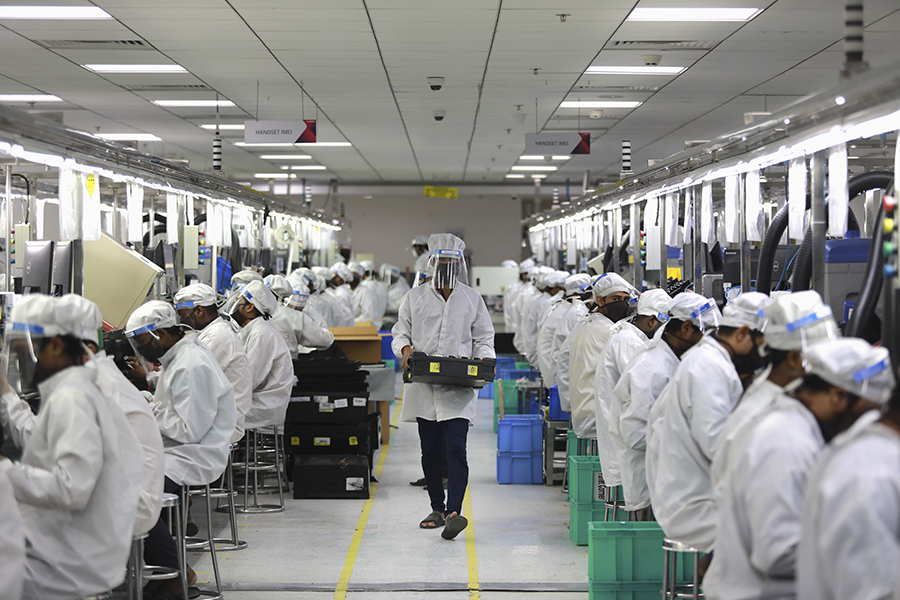 Workers wear protective gear at an assembly line of mobile phones at Lava International Limited's manufacturing plant, after some Covid-19 lockdown restrictions were lifted in Noida.. Photo: Anushree Fadnavis/ REUTERS The pandemic has painted a grim picture across the globe; halting supply chains, revenue streams and more. But as recovery measures were put in place, revival was imminent as businesses began picking up and operations resumed. A recent survey of Chief Financial Officers (CFOs) carried out by American Express India showed that many sectors, including telecom and pharmaceuticals reported limited or almost no impact due to the pandemic. It revealed that more than half of the companies surveyed (51 percent) have not been adversely impacted due to the ongoing pandemic. “They have either experienced growth or have had no impact on business performance,” the survey said. Consulting major EY was the knowledge partner of the survey. While sectors such as energy and resources, real estate, consumer durables, automotive and technology reported a decline in business activity attributable to the pandemic, sectors such as manufacturing, healthcare and pharma actually reported growth during the period, the survey showed. This is the first comprehensive report with a disaggregated sector-wise analysis on the extent of the damage that the COVID-19 pandemic and the subsequent restrictions have caused in the Indian economy. There has been a line of thinking that economic impacts could last for many months, if not years, if restrictive measures need to be kept in place for protracted periods. Will India see multiple peaks and troughs in the number of cases and losses of output, spanning several quarters? By when economic activity return to their pre-outbreak levels? These are questions that have been dominating The survey’s findings corroborates with what Megha Chopra, Country Head, Global Services India, American Express had told Moneycontrol in an exclusive interview. “Undoubtedly, the pandemic has caused an unprecedented impact on businesses. Both the degree of disruption and prolonged impact of disruption have been very, very high,” she said. Different industries and sectors, however, have responded differently to the pandemic, with some such as online media, online education and e-commerce thriving during the pandemic. “They have topped the charts in terms of sales during the pandemic. The growth curve has been on the incline for these industries,” Chopra said. On the other hand, industries such as travel and tourism have seen their businesses come to a complete halt. “We are seeing softer recovery in these sectors. Domestic travel has just started to inch back. It is not as pessimistic that we had earlier thought that it will only remain a virtual world. There are signs of soft recovery. It will take 18-20 months for full recovery”, Chopra had said. Over half (50 percent) of the CFOs surveyed were hopeful of returning back to the normal course of business in less than a year, a heartening piece of finding indicating that the Indian economy will rebound faster than what was earlier anticipated. Reserve Bank Governor Shaktikanta Das on October 21 said the country is at the doorstep of economic revival on the back of accommodative monetary and fiscal policies being pursued by the central bank and the government.

Tweets by @forbes_india
News by Numbers: We're wreaking havoc on the planet
How effective is the AstraZeneca vaccine really?