Financial markets across Asia fell Thursday, led by sharp drop in stocks in China, as investors pondered the potential effect of the coronavirus 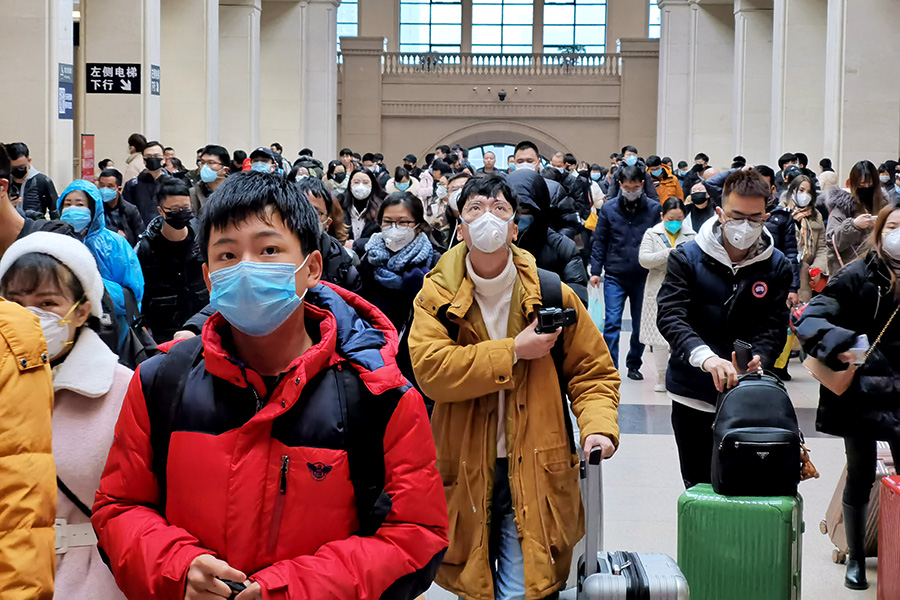 HONG KONG — The outbreak of a deadly disease in China has cast a pall over growth prospects for the world’s second largest economy, raising fears about the global outlook if the mysterious coronavirus spreads or worsens.

Financial markets across Asia fell Thursday, led by sharp drop in stocks in China, as investors pondered the potential effect of the coronavirus. The extent of its severity has become more clear over the past two days, as Chinese officials reported a surge in cases and a jump in the number of deaths to at least 25.

On Thursday, officials extended limits on movement in and out of Wuhan, the epicenter of the outbreak, to two nearby cities that millions more call home.

The uncertainty has put a palpable damper on Chinese life just before the Lunar New Year holiday — typically a time of travel, shopping and gift-giving — which begins Friday. Train stations and airports were subdued as travelers changed plans for the weeklong holiday, and seven of the most anticipated film openings of the holiday season were postponed.

The Forbidden City in Beijing — China’s most popular tourist attraction — announced, without giving further information, that it would be closed starting Saturday.

On the minds of many in China and around the world right now: Could this new virus cause the same kind of damage as the SARS epidemic, which killed 800 people in 2003?

The question is a crucial one beyond China because the Chinese economy has for years been one of the world’s most powerful growth engines. A stumble in China could hobble jobs and growth elsewhere.

China’s growth in 2003 plunged briefly during the height of SARS but came roaring back in a time when global companies were building Chinese factories and exporting more and more goods abroad.

Today, China’s economy is bigger but is growing at its slowest pace in nearly three decades. It is grappling with problems like the trade war with the United States and a campaign to wean local governments and companies off their addiction to borrowing.

It also depends more on consumers like Mo Chen, 29, who is curtailing her holiday travel plans to stay on the safe side. In 2003, the worst-hit sectors were transportation, retail and restaurants.

Mo, who works for an internet company in Shanghai, had been looking forward to traveling home to see her family in Xiangyang, Hubei province, nearly 200 miles from Wuhan. But given the outbreak, she and her brother, who lives in the city of Hangzhou, decided not to go home. It will be the first time that Mo has not spent Lunar New Year with her parents.

She now plans to stock up on supplies and stay home, not even venturing out to meet friends or go to the movies. She also intends to skip a trip to the mall to buy new outfits because nobody will be around to see her wear them. Her brother, meanwhile, is planning to buy pots and pans.

“He never cooks,” she said. “He always either eats out or eats at the company canteen. But last night our mom asked us to stock up on food — not go out — and cook at home.”

For now, the impact is not yet clear. Authorities seem to be responding faster to this outbreak than they did in 2003, but China’s censors are erasing anything that veers from the official narrative. The new coronavirus appears to be less deadly than SARS, but it is difficult to detect, and authorities started limiting movement out of Wuhan only after many people had set out for their holiday travels.

“It’s going to depend on how China continues to be transparent with the international community,” said Peter Levesque, managing director of Modern Terminals, a port operator in Hong Kong. “That’s all business can ask for. The rest is unknown.”

Wuhan is essential to commerce in its region of China, though the economic impact there is expected to be muted by the advent of the holiday. The city is a major national transport hub and has become a center for auto manufacturing, with factories that build cars for General Motors, Honda and many others, as well as dozens of auto parts makers.

But the effect on people across the country could be a more important factor.

Over the long term, China wants its consumers to spend more. Beijing has sought to develop a consumer culture similar to that of the United States so that China’s economy becomes less reliant on big construction and infrastructure projects that often receive government financing. But that shift makes China more vulnerable to events that spook shoppers.

Chinese consumer sentiment had already been bruised. Families spent the past year watching prices rise in grocery stores — increases due largely to the outbreak of a pig disease that depleted much of China’s pork supply. More families are saving rather than spending and are worrying about the future.

“We will probably see a lot less domestic activity than we would normally see at this time of the year,” said Julian Evans Pritchard, a senior China economist at Capital Economics.

“The concern is that it encourages people to cancel their travel plans, and it comes at a crucial time in terms of holiday travel and spending,” he said.

The disease has struck during one of the year’s busiest spending seasons. Box office sales during the Lunar New Year holiday last year set a record, reaching $860 million over the first six days of the holiday, according to Maoyan, a ticketing service owned by Alibaba.

New spending records will be harder to attain this year. Among the film debuts postponed Thursday was “Boonie Bears: The Wild Life,” a cartoon about clever bears that clash with a hapless logger. In a message to fans on its social media account, the production company wrote, “We don’t want to see audience friends take any health risks,” adding that it did not want to “see that the epidemic may spread further.”

Other businesses in some parts of China have been temporarily closed. Major airlines, including Hong Kong’s flagship carrier, Cathay Pacific, have restricted flights to Wuhan. Companies urged employees to wear masks and not to travel.

Companies that were still offering services urged caution. Didi Chuxing, China’s equivalent to Uber, sent a message to passengers saying that “due to the virus, for the health and safety of everyone, both drivers and passengers should wear face masks.”

Hong Kong, the semi-autonomous Chinese city that has been roiled by anti-Beijing protests, could sustain yet another blow. The region is already in an economic recession after more than half a year of anti-government protests.

“If you look at those sectors of the economy, the retail and local businesses, they have already been sadly bruised by the protests last year,” said Tara Joseph, president of the American Chamber of Commerce in Hong Kong. “This would just be an extra kick in the teeth that they don’t need.”

Tweets by @forbesindia
The downside of switching to English
Sips from Sri Lanka: The making of Ceylonese tea