How Jammu & Kashmir was dismantled

What is Article 370, and what does Amit Shah's announcement on the newly bifurcated state, into J&K and Ladakh, mean? A quick explainer 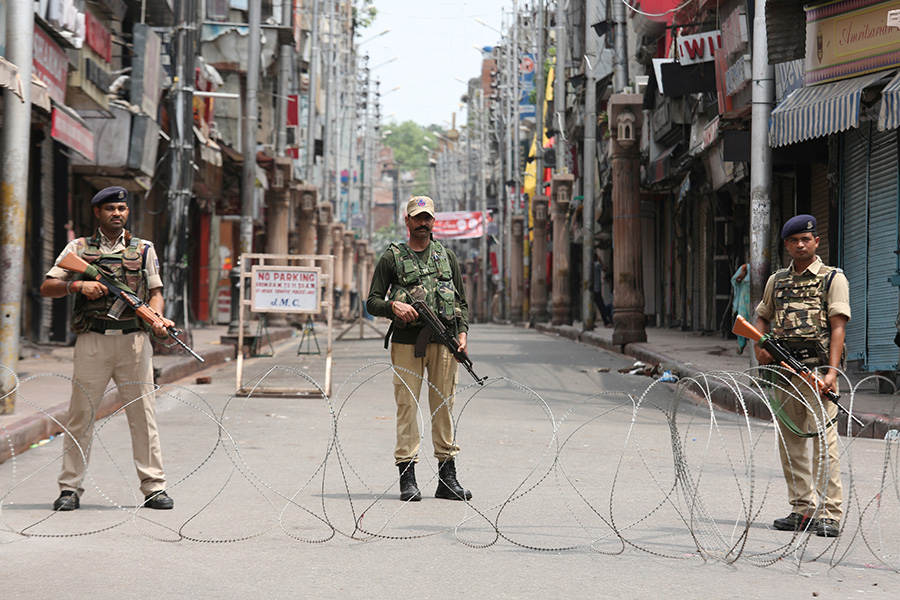 On Saturday, as fresh troops continued to move into Kashmir in the tens of thousands and Amarnath pilgrims were made to evacuate, former chief minister and vice-president of National Conference, Omar Abdullah, met with Jammu Kashmir Governor Satya Pal Malik, who assured him that the Centre wasn’t making any move to tamper with Article 370. In less than 48 hours, however, Abdullah and other mainstream political leaders in Kashmir would be placed under house arrest. Home Minister Amit Shah would present the “resolution to revoke Article 370 in Jammu and Kashmir except the first clause 370 (1)” in the Rajya Sabha, while announcing the bifurcation of the state into two union territories: Jammu & Kashmir (with legislature) and Ladakh (directly governed by the Centre). What is Article 370?
Following the messy accession deal with the reigning monarch of Kashmir, the Union government had included Article 370 in the Constitution on October 17, 1949. This granted the state special status, which exempted it from the Indian Constitution (except Article 1—which mentions J&K among the list of Indian states—and Article 370 itself), permitting the state to draft its own constitution. “This was not meant to be enduring,” according to Supreme Court lawyer and constitutional expert, K V Dhananjay. “Article 370 (3) states that the President may put an end to it at any time, based on the recommendations of the constituent assembly.” Coming five years later, Article 35A was incorporated in the Constitution under Article 370 by a Presidential Order. Among other things, it granted the state legislature to define the state’s “permanent residents” and their special rights and privileges. Those not deemed permanent residents would be banned from settling there, buying property, including land, and benefitting from state services like government jobs, scholarships and other kinds of aid. While many articles have since been introduced under Article 370 to extend provisions of the Indian Constitution to J&K (thus nullifying the effect of the special status, according to observers), Article 35A remained most contentious. Effectively, it restricted the Centre’s role in the state to defence, foreign affairs, finance and communications, and gave the state the authority to decide on its own laws of citizenship, property rights and fundamental rights of its ‘citizens’. So, with Articles 370 and 35A in tandem, J&K had been able to maintain an uneasy autonomy. The legality of both these articles has been challenged several times across various courts in India. The Delhi High Court and Supreme Court separately have, as recently as a year ago, dismissed several individual petitions that sought to declare Article 370 unconstitutional. The High Court of Jammu and Kashmir had in October 2015 ruled that Article 370 cannot be annulled, since the constituent assembly (charged with drafting the constitution), dissolved in 1957 without rescinding the article, thereby according it a permanent status irrespective of being introduced as “temporary, transitional and special provisions” back in 1949. The validity of the state legislative assembly—which has also not been in operation since the fall of the PDP-BJP government last year—to approve or recommend any changes to Article 35A is a matter of debate among constitutional experts. Some agree that despite it not being a constituent assembly, the elected representatives would have been able to weigh in, had the state not been under President’s Rule. "Now there is no opportunity to consult the assembly," says Dhananjay. "So, everything that has happened now is completely within the law." What does Amit Shah’s announcement mean?
What Home Minister Amit Shah has now done is proposed to delete almost all of Article 370, with an immediate Presidential order, thereby automatically striking off Article 35A. With this, Jammu and Kashmir would have become like any other state, except for the bill that followed, which seeks the bifurcation of the state. Dhananjay calls this ‘Episode 2’. “With the dissolution of the state, the subjects of law and order, land rights, etc. are no longer with the state. What power the elected representatives will be allowed to retain can only be ascertained after the draft bill becomes available,” he said. Meanwhile, Shah is not expected to face much trouble getting both bills passed in both houses, as a simple majority would suffice (as opposed to a two-thirds majority). Moreover, the ratifications of over 50 percent of the states is also not required, as when you are amending some part of the Constitution, for example. As to what happens to other articles like 371 (A), which are derived from Article 370 and accords special status to many states like Maharashtra and Gujarat, Dhananjay believes that the key is the fact the 371 provides protection (from backwardness), while 370 accords privilege. One is not like the other.

The author is a freelance writer and member of 101Reporters.com, a pan-India network of grassroots reporters.

Tweets by @forbesindia
A tale of two regions: Jammu celebrates, Kashmir in gloom
Glimpses from the 2019 Forbes India 30 Under 30 Soirée