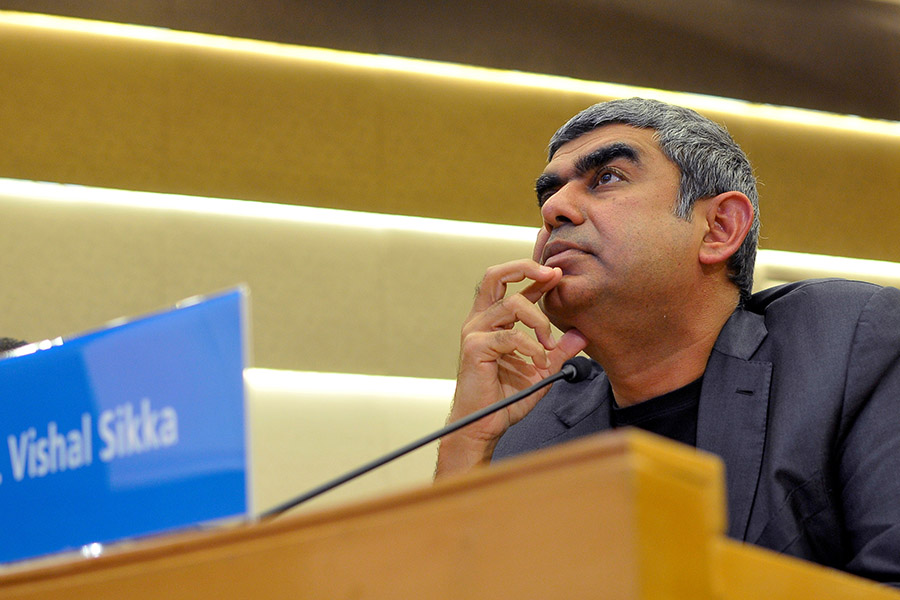 Infosys CEO Vishal Sikka has resigned, ending the Bengaluru IT company’s only experiment with professional management thus far, after over a year of constant skirmishes between founder NR Narayana Murthy and the company’s board, led by R Seshasayee. Shares fell as much as 13.39 percent intraday, before closing 9.6 percent down at Rs 923.1 on Friday, more than erasing the previous day’s 4.7 percent gains on the news of the company’s first share buyback.Infosys has named Sikka executive vice chairman, and current COO UB Pravin Rao as the new CEO and MD, reporting to Sikka, with immediate effect. The company will look for a new permanent chief executive to be in place no later than March 31, 2018, according to a statement to the Bombay Stock Exchange on Friday.

Murthy had kept up pressure on the board and Sikka on what he termed “governance issues,” through newspaper and television interviews. He has asked for the findings of independent investigations into the $200 million acquisition of an Israeli automation specialist, Panaya Inc. and into payouts made to a former CFO and a former general counsel to be fully made public.

Murthy had alleged that the payout to former CFO Rajiv Bansal, who left the company in December 2015, was “hush money” to cover up an overvaluation of Panaya, among other things.

Sikka, who had thus far held back, vented his sense of betrayal from Murthy in a letter to the board, discussing his reasons for deciding to leave.

“But, the distractions that we have seen, the constant drumbeat of the same issues over and over again, while ignoring and undermining the good work that has been done, take the excitement and passion out of this
amazing journey,” said Sikka, on whose watch the company bridged the gap in growth with its peers — an important reason he was brought in, in the first place by Murthy.

On Friday, Murthy made what probably was his most direct attack on Sikka, telling Mint newspaper that three directors on the board of Infosys felt Sikka was not CEO material and better suited to be CTO. Murthy didn’t name two of them, and the third was Ravi Venkatesan, currently the co-chairman of the board, according to the newspaper report.

“The Board is profoundly distressed by the unfounded personal attacks on the members of our management team that were made in the anonymous letters and have surfaced in recent months,” Infosys said in its statement. “The Board denounces the critics who have amplified and sought to further promote demonstrably false allegations which have harmed employee morale and contributed to the loss of the Company’s valued CEO.”

The “continuous drumbeat of distractions and negativity” over the last several months and quarters has curtailed his and his senior colleagues’ ability to stay focused on work at Infosys, he said. It had cost him “hundreds of hours” recently.

Sikka added in his letter to the board: “The attacks continue, and worse still, amplified by the very people from whom we all expected the most steadfast support in this great transformation.”