Internet suspension in the Valley causes decline in handicraft exports

Kashmir's carpet, shawl and other cottage industries are crippled without the internet, and exports have suffered dramatic losses; the region has faced an Internet shutdown since four months 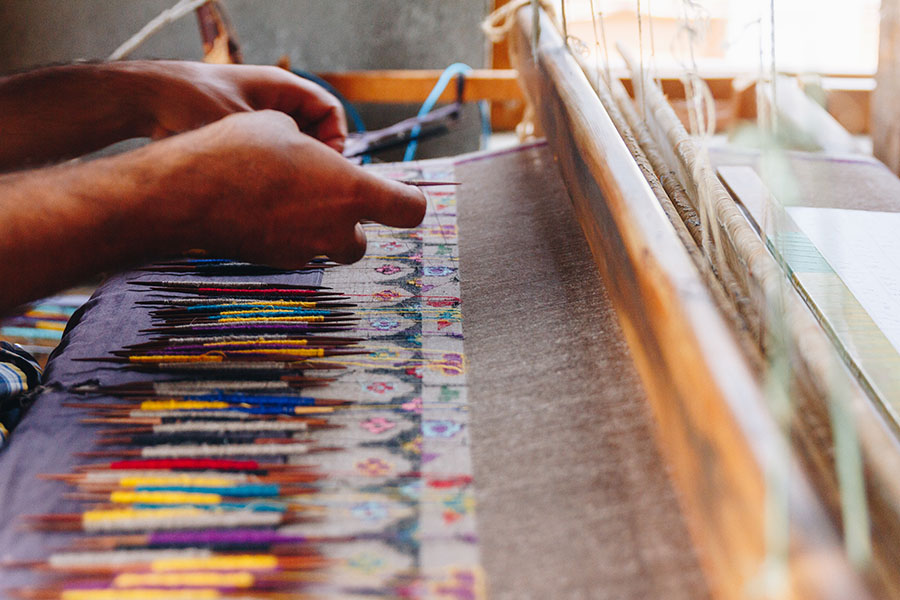 Bandipur, Jammu and Kashmir: After adjusting his notes on carpet weaving, Imtiyaz Ahmad Dar, 28, rushes to pick apples at a nearby orchard, where he is a daily wage worker. The orchard is in the Gada Khud village of Bandipora district, about 30 kilometres from Srinagar of Jammu & Kashmir (J&K). Gada Khud has never been known for its apples. Instead, it’s called the ‘Carpet Village’; of the 400 households in the hamlet, nearly 300 are carpet weavers. However, since August, the ongoing internet blockade has crippled the exports of the carpet industry and several other cottage industries.

With no communication with the buyers, the blockade has proven an unyielding grit in the carpet looms of the village. Dar, who belongs to a family of weavers, stated that the weavers in the area now prefer working as labourers to make ends meet. The dealers from Srinagar don’t even enquire about the orders placed before the internet blockade, he added.  According to data by the J&K Department of Handicrafts, the exports of handicrafts have declined by 62 percent in the second quarter of the current fiscal year, as compared to the first quarter. Kashmir, famous for carpets, shawls and papier-mâché items, has acquired a huge market in India and abroad. However, with ecommerce replacing the conventional business models, the lack of internet in Kashmir is sounding a death knell for the handicraft sector. The region has faced Internet shutdowns as many as 55 times this year alone—higher than any other state or Union Territory—and the current communication clampdown has been in place for over four months. According to internet tracker internetshutdowns.in, there have been 180 internet blockades in the region since 2012.  Drop in exports
The Valley-based exporters are unable to connect with their clientele spread across India and abroad. This had led to a massive fall in the exports of handicrafts this year.   Parvez Ahmad Bhat, who represents the Kashmir Artisans Rehabilitation Forum, told Forbes India that the current situation in Kashmir has adversely affected the entire handicrafts sector this year. He highlighted that the handicraft sector is dependent on ecommerce, and the suspension of internet services has affected the delivery of raw materials to the weaver, and thus, affecting the production. Bhat claimed the artisans couldn’t work on their previous orders after failing to connect with their dealers. “Be it a carpet, Pashmina shawl or a wood carving, every dealer prefers to make alterations in the design, which couldn’t take place when the internet wasn’t available,” Bhat added. According to the J&K Department of Handicrafts, in the first quarter, handicrafts worth Rs 298.28 crore were exported, which included carpets worth Rs 122.65 crore. The following quarter, during which the internet services were suspended, the overall exports plunged to Rs 187.47 crore of which carpets amounted to Rs 76.26 crore. The exports of shawls declined from Rs 88.70 crore in the first quarter to Rs 57.23 crore in the following one. Similarly, the exports of papier-mâché products dropped from the first quarter of the year to Rs 1.26 crore from Rs 2.05 crore; crewel embroidery to Rs 51.03 crore from Rs 82.7 crore; and wood carving to Rs 1.69 crore from Rs 2.72 crore, in the second quarter. Compared to the second quarter of 2018, the exports of handicrafts during the same quarter this year have witnessed a fall by Rs 48.99 crore.  Government to assess impact
The price of a square-foot of carpet ranges from Rs 2,000 to Rs 5,000 in the international market. Depending on the kind of knotting and size, a single carpet can be priced between Rs 2 lakh to Rs 20 lakh.  To manufacture a carpet, a dealer purchases raw material, which is then given to a dyer to colour. Later, notes are written so that a weaver creates the given design on the carpet. The entire process takes at least three months until the carpet is ready.  Similarly, to make a Pashmina shawl, high-quality wool is first spun into yarn, dyed and then woven on a loom into the final product.  Sheikh Ashiq Ahmad, a member of the board of directors of Carpet Export Promotion Council (CEPC) and the president of Kashmir Chamber of Commerce and Industries (KCCI), told Forbes India that the internet blockade cost them a lucrative season of business as they witnessed massive cancellation of orders for the months of August, September and October. He highlighted that the countries in the Gulf and Europe typically place orders in July, August and September. However, since the internet wasn’t available, the entire process of exporting handicrafts was stalled. “Even now, the absence of mobile internet and broadband will cost us the routine sales for Christmas and New Year,” he said. The communication blockade has impacted as many as 3 lakh artisans in the region, including 60,000 associated with the carpet weaving. The Department of Handicrafts is assessing the impacts of internet suspension in the exports of handicrafts in the third quarter, which will end in December. The Assistant Director of the handicrafts department, Mushtaq Ahmad Shah, told Forbes India that in the second quarter, the orders couldn’t take place owing to the Internet blockade, and this resulted in negative progress after July.  “We are now accessing how much the internet blockade has affected the exports in the third quarter,” he said.

(The author is a Srinagar-based freelance writer and a member of 101Reporters.com, a pan-India network of grassroots reporters)