Jeff Bezos, founder of Blue Origin and Amazon, announced the space company's vision for operations on the moon, in Washington on Thursday. 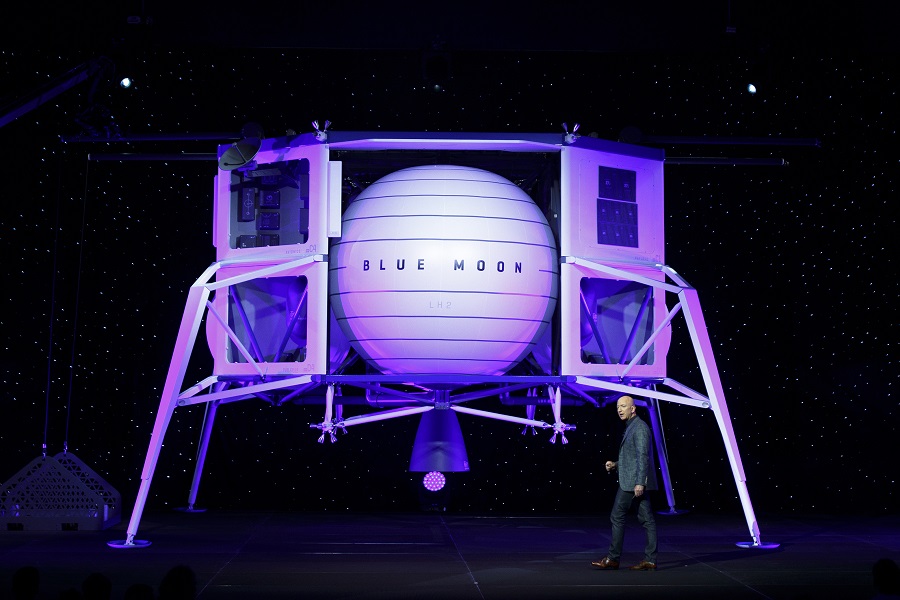 Jeff Bezos, the founder of Amazon, discusses his Blue Origin rocket venture in Washington, May 9, 2019. The event was billed as a chance for Bezos to “update on our progress and share our vision of going to space to benefit Earth.”
Image: Tom Brenner/The New York Times

Bezos, founder and chief executive of Amazon, also owns Blue Origin, a rocket company. In a ballroom here Thursday, Bezos described his dreamy vision of the future: not just millions of people in space but eventually 1 trillion, living not on moons or planets, but space colonies in a style originally envisioned by a Princeton physicist, Gerard K. O’Neill.

“This would be an incredible civilization,” Bezos said.

The space colonies would be decades away, to be built by future generations. Bezos said what he and others today can do is start building the infrastructure. In the short term, that includes a lunar lander, Blue Moon, a sleek vehicle that became visible as a curtain in front was pulled away.

“We are going to build a road to space,” Bezos said. “And then amazing things will happen.”

The presentation came in a style more akin to Apple or Google announcing their latest phones. It was a contrast to how Blue Origin worked for years in something like stealth mode, saying little about its plans and goals.

During his speech, Bezos gushed about the specifications of the lander, the efficiency of the engines and how much it could carry. He also made a direct pitch to NASA and the White House — that this would help meet President Donald Trump’s goal, stated by Vice President Mike Pence, to send astronauts back to the moon by 2024.

Bezos founded his rocket company in 2000, which means that it has been around longer than the other, better-known billionaire rocket company, Elon Musk’s SpaceX. Musk started SpaceX in 2002.

But for the first 15 years of its existence, Blue Origin operated quietly. When one of its rockets crashed during a test flight in 2011, a week passed before Bezos acknowledged the failure. 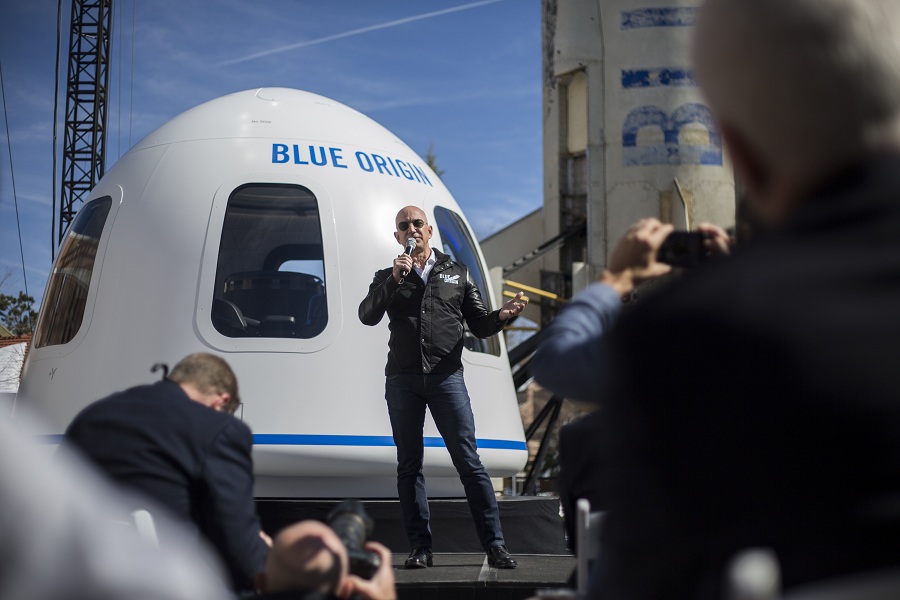 FILE -- Jeff Bezos, the founder of Amazon, discusses his Blue Origin reusable rocket system in Colorado Springs, Colo., April 5, 2017. Blue Origin regularly live-streams test flights of that rocket, and has built a factory for manufacturing a larger rocket, the New Glenn, that is set to take satellites, and possibly people, to orbit beginning in 2021.
Image: Nick Cote/The New York Times

In 2016, Bezos finally invited journalists for a visit to Blue Origin’s headquarters in Kent, Washington, south of Seattle, and described his vision of millions of people living and working in space.

Bezos noted that he had studied and thought about rockets since he was 5 years old. “I never expected to have the resources to start a space company,” he said. “I won a lottery ticket called Amazon.com.”

Two years ago, Bezos said he would be selling $1 billion a year in Amazon stock to finance Blue Origin. Bezos will retain control of Blue Origin after his divorce this year.

The company said during its latest test — the 11th — that the first flights carrying people will occur later this year.

Outside NASA’s Kennedy Space Center in Florida, Blue Origin has built a new factory for manufacturing a larger rocket, New Glenn, that is scheduled to take satellites, and possibly people, to orbit beginning in 2021. There is mention of an even larger rocket, New Armstrong, but no details have been released.

In the last couple of years, the Trump administration has revived plans to send astronauts back to the moon, and NASA last year announced a road map that included turning to commercial companies for sending experiments and cargo to the lunar surface.

Officials at Blue Origin have said the Blue Moon lander would do just that. Last year, Blue Origin received $13 million from NASA to work on technologies needed for a moon lander.

A low-cost approach to landing on the moon is risky; SpaceIL, an Israeli nonprofit, attempted to land on the moon in April, but crashed.

Other companies will be competing to build pieces of Gateway, an outpost that NASA plans to put into orbit around the moon as a way station for astronauts headed to the moon’s surface. NASA is also asking for ideas from companies for astronaut-carrying landers.

Last year, SpaceX announced that a Japanese billionaire, Yusaku Maezawa, had signed up for a trip that would go past the moon without landing on it, and swing back to Earth.

Under the Outer Space Treaty, no one can own a piece of the moon (or any other piece of the solar system except Earth). But, at least under the reading of some lawyers, companies can sell what they take from the moon.

With NASA, the European Space Agency and others aiming to go to the moon, government business could provide a boon to companies hoping to set up shop there, but how well they will do is still speculative.

Tweets by @forbesindia
Can Bisleri's 'smart' camels outwit 'donkeys'?
To curb online bullying, Instagram has to spot it