The Group of 7 agreed on a $20 million aid package to help Brazil and its neighbors fight the fires raging in the Amazon rain forest; Modi rebuffed Trump's offer to mediate the dispute over Kashmir, and other highlights from the summit 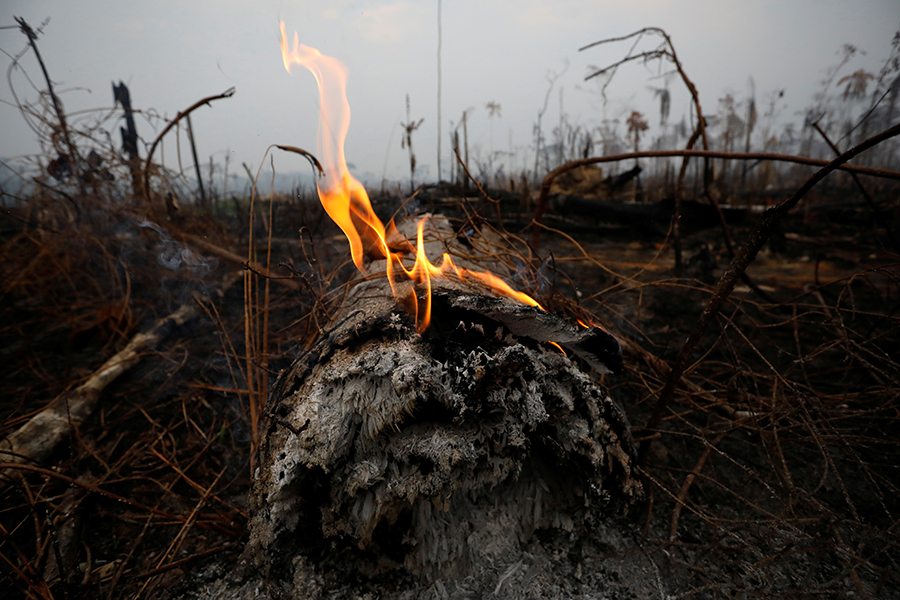 A tract of Amazon jungle is seen after a fire in Boca do Acre, Amazonas state, Brazil August 24, 2019. REUTERS/Bruno Kelly

The Group of 7 agreed on a $20 million aid package to help Brazil and its neighbors fight the fires raging in the Amazon rain forest, President Emmanuel Macron of France said Monday at the G-7 summit in Biarritz, France.

Macron and President Sebastián Piñera of Chile said they also had reached an agreement in concept with the countries of the Amazon basin for a long-term program of forest protection and reforestation of cleared lands. They said more details might be presented next month at the U.N. General Assembly.

The announcements followed a session on climate, the oceans and biodiversity that included representatives of several countries that are not members of the Group of 7.

President Donald Trump, who was holding meetings with other leaders, did not attend that session, according to Macron. The White House press secretary, Stephanie Grisham, said a senior member of the administration took part in his place.

Macron and German Chancellor Angela Merkel have called the Amazon fires a global crisis and a significant contributor to climate change, and insisted that the Group of 7 address it.

The fires accelerate depletion of one of the world’s largest forests, a crucial sink for the atmospheric carbon dioxide that contributes to global warming. They also threaten indigenous peoples and shrinking wildlife habitat.

Even before the recent fires, deforestation had accelerated since Jair Bolsonaro became president of Brazil, and environmental groups have accused him of encouraging it. Fires in the Amazon are often set intentionally — and illegally — to clear forests for farming or ranching.

However, reports say that Brazil might reject this aid, as ministers say the money is not needed and that foreign powers could use it to gain control of the Amazon.

Trump pivoted again on China, turning down the heat on the trade war — for now.

Trump shifted tone on his trade war with China yet again Monday, calling President Xi Jinping of China a “great leader” just three days after branding him an “enemy” of the United States.

Trump said that Chinese officials had reached out by telephone and that the two sides would soon restart trade talks, after the latest escalation in tariffs and his “order” to American companies to look for ways to pull out of China.

“We were called and we’re going to start very shortly to negotiate,” Trump said as he met with President Abdel-Fattah el-Sissi of Egypt on the sidelines of the summit . “We’ll see what happens, but I think we’re going to make a deal.”

Trump appeared to be toning down a conflict that has battered world financial markets, hours after China’s chief negotiator did the same.

Trump has pivoted repeatedly in his language on the conflict in recent days. On Friday, after China imposed new tariffs in retaliation for U.S. levies, Trump said he “hereby ordered” American companies to start leaving China and vowed to increase his own tariffs. He referred to Xi as an “enemy.”

On Sunday, Trump said he had had “second thoughts” about the escalation. But within hours, aides rushed out statements saying that his only regret was that he had not been even tougher on China.

Trump is considering holding the next G7 meeting at one of his resorts.

Next year in Miami?

Trump appeared to confirm Monday that he wanted to hold next year’s G-7 summit at one of his own properties, the National Doral luxury golf resort near Miami.

The president, who is scheduled to host the 2020 meeting as part of the usual rotation among member nations, told reporters that he was considering a site in Doral near Miami International Airport, almost certainly referring to the Trump National Doral, although he did not use the name.

“It’s a great place,” Trump told reporters during a meeting with Merkel. “It’s got tremendous acreage, many hundreds of acres, so we can handle whatever happens. It’s really — people are really liking it and plus it has buildings that have 50 to 70 units. And so each delegation can have its own building.”

Critics have already accused Trump of taking advantage of his presidency to make money through his properties. The idea of his using one of his resorts to host an international summit would raise many questions, including whether and how much the government would pay for the premises, and how much Trump would profit from it.

The Washington Post reported in June that the president had suggested the Doral property to aides as a site for the 2020 G-7 meeting.

Modi rebuffed Trump’s offer to mediate the dispute over Kashmir.

Prime Minister Narendra Modi of India on Monday declined Trump’s offer to mediate the escalating dispute with Pakistan over the territory of Kashmir, saying that he did not want to involve any other country in the matter.

“These issues are bilateral,” Modi said as he sat with Trump on the sidelines of the G-7 meeting.

This month, Modi’s government terminated the autonomy of the part of Kashmir controlled by India, and severed communications to the impoverished region in the Himalayas, long been claimed by both India and Pakistan. Indian forces rounded up more than 2,000 Kashmiris in a crackdown in the days before and after the move, local officials have told The New York Times.

Speaking with reporters in Biarritz before his meeting with the Indian prime minister, Trump offered no criticism of India’s action and deferred to Modi’s preference that the United States keep out of the matter.

“The prime minister really feels he has it under control,” Trump said.

Asked whether his offer to mediate was still on the table, Trump said, “I’m here, if for any reason, but I think they can do it themselves, though. They’ve been doing it for a long time.”

Prime Minister Imran Khan of Pakistan told The Times last week that Modi and his government had rebuffed all entreaties to talk and essentially threw up his hands at the prospect.

“There is no point in talking to them,” Khan said. “I mean, I have done all the talking.”

Trump says he knew in advance that Iran’s foreign minister would be in Biarritz.

Trump on Monday endorsed the surprise French move to bring Iran’s foreign minister to Biarritz during the G-7 meeting, saying he had been asked in advance and had no objection. But he said he had declined to meet with the minister.

Macron, who has tried to preserve the landmark 2015 international nuclear agreement with Iran that Trump has abandoned, extended a last-minute invitation to Foreign Minister Mohammad Javad Zarif to hold talks on the sidelines of the summit.

Zarif’s arrival Sunday caught many diplomats and the news media by surprise. He has met with Macron, the French foreign minister and officials from Britain and Germany.

Speaking with reporters, Trump said he had given his blessing for the meetings.

“I spoke to President Macron yesterday, and I knew everything he was doing,” Trump said. “And I approve whatever he was doing. And I thought it was fine.”

But he chose not to see Zarif, who became the target of sanctions by the Trump administration in July.

“I think it’s too soon to meet, I didn’t want to meet,” Trump said. “But it’s true there’ll be time to meet with Iran, and it’s going to be a great thing for Iran. They have a great potential.”

He again criticized the 2015 nuclear deal but said he would like to strike a better agreement that would be beneficial to Tehran if it gives up support for international terrorism. “We’re looking to make Iran rich again,” he said.