By Matt Phillips and Jeanna Smialek 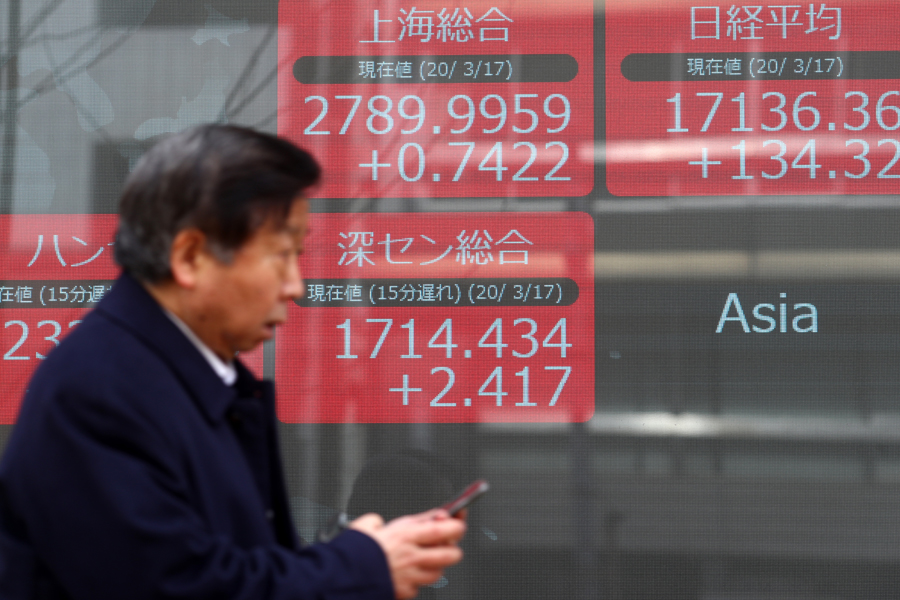 Markets in the Asia-Pacific region were mixed midday Tuesday as investors tried to grapple with a disastrous Monday on Wall Street.

Japan’s Nikkei 225 index was down about half a percent midday. In mainland China, the Shanghai Composite Index was down 0.3%.

The region’s biggest loser was South Korean stocks. The Kospi index there fell 2.1%. The biggest gainers were in Australia, where the S&P/ASX 200 index was up 3.2%.

Futures markets signaled a positive opening on Wall Street, though they also were predicting more losses in European trading.

Even President Donald Trump’s boundless enthusiasm for the U.S. economy has wilted in the face of what promises to be a widespread economic slowdown, as he acknowledged Monday that the country might be heading toward a recession.

The air of inevitable decline was palpable. A day after the Federal Reserve unleashed a major effort to shore up market confidence, the S&P 500 plunged nearly 12% Monday — the latest in a series of big drops since the pandemic knocked it from a record high and the worst one-day decline since 1987.

There are few historical parallels for the shock waves created by the coronavirus pandemic. From still-closed factories in China — where the outbreak first emerged — to Western nations where millions of people are living in a state of semi-house-arrest, most of the engines that keep the global economy aloft have simultaneously sputtered to a halt.

Some of the first snapshots to capture the gravity of the outbreak’s effect on economic activity appeared Monday, suggesting that industrial activity has fallen off both in parts of the United States and in China.

Factory activity in China, the world’s second-largest economy, dropped 13.5% last month from February 2019. Fixed-asset investment, which touches on construction of buildings, roads and railways and was long the driver of Chinese growth, fell roughly 25%.

And one of the first bits of data for U.S. economic activity in March, a gauge of manufacturing activity in New York state, showed the worst one-month plunge in the index’s history, falling to its lowest level since 2009.

“Unfortunately this is the new reality,” economic analysts with investment bank Jefferies wrote. “This report is a harbinger of what is to come.”

The forecasts for growth that economists were making just a few weeks ago have been erased, replaced by penciled-in predictions of a sharp contraction. Goldman Sachs analysts now expect gross domestic product in the U.S. to contract at a 5% annual rate in the second quarter of 2020, in what would be the steepest drop since late 2008. JPMorgan Chase economists recently wrote that “the coming collapse in consumer spending will pull first-half growth into negative territory.”

But the continuing collapse in financial markets suggests that investors think the reality could be beyond the powers of central banks such as the Fed to stop.

On Sunday, the Fed cut interest rates to near zero and pledged to buy hundreds of billions of dollars worth of government bonds and mortgage-backed securities with freshly created money. For the last decade, variations of such programs, known as quantitative easing, have set off huge rallies in stock markets and other risky assets, as investors saw those efforts as a green light to take bigger risks.

Not any more. On Wall Street, stocks plummeted 7% after the start of trading, triggering a 15-minute trading halt. It was the third such halt over the last week. The sell-off continued after trading recommenced, undoing the 9.3% surge in the S&P 500 on Friday, when a White House news conference promised greater efforts to increase testing for the virus.

“The Fed has a lot of tools in its tool kit. A vaccine isn’t one of them,” said Rick Rieder, chief investment officer of global fixed income at BlackRock. “And I think the markets are realizing that it’s going to be uncertain for a period of time.”

The disorder in financial markets has spread well beyond the market for stocks.

Prices for corporate bonds, both from stable borrowers and riskier companies that issue junk-rated debt, fell. In the options market, the Chicago Board Options Exchange Volatility index, widely considered the stock market’s “fear gauge,” climbed more than 40% to its highest level since the worst of the financial crisis.

Prices of commodities have collapsed as the slump in global demand from China has resulted in an oil price war between Saudi Arabia and Russia, two giant global producers of crude. Bench mark prices for American crude oil fell more than 9%, to less than $30 a barrel, and gas prices nose-dived. Some analysts predict that oil prices could drop below $20 a barrel in the coming weeks.

Regional banks were some of the hardest-hit shares Monday. The S&P 500 financial sector fell nearly 14%, with regional lenders such as Fifth Third, Citizens Financial and KeyCorp all dropping nearly 22%.

Perhaps more worrying were the signs of continuing problems in the less visible markets that act as the plumbing of the financial system.

Borrowing costs shot higher Monday in the short-term lending markets, where companies and financial entities borrow billions every day to fund their daily operations. The Fed’s giant effort to pump money into the markets over the past week was expected to keep such borrowing costs down, but it didn’t go as planned.

“Things are not only quite bad, I would say, they’re likely worse than anything we’ve ever seen,” Alex Blanchard, global head of repo trading at Goldman Sachs, said on a client call Sunday night. “While it’s always difficult to compare times through history, I would say this is as bad as we’ve ever experienced.”

Tweets by @forbes_india
So we're working from home. Can the internet handle it?
Coronavirus: A look at the world's deadliest pandemics