Sales of Apple's flagship product had fallen for the past year, but Tuesday, Apple said iPhone revenue was growing again, lifting Apple's profit by 11.4% to $22.3 billion 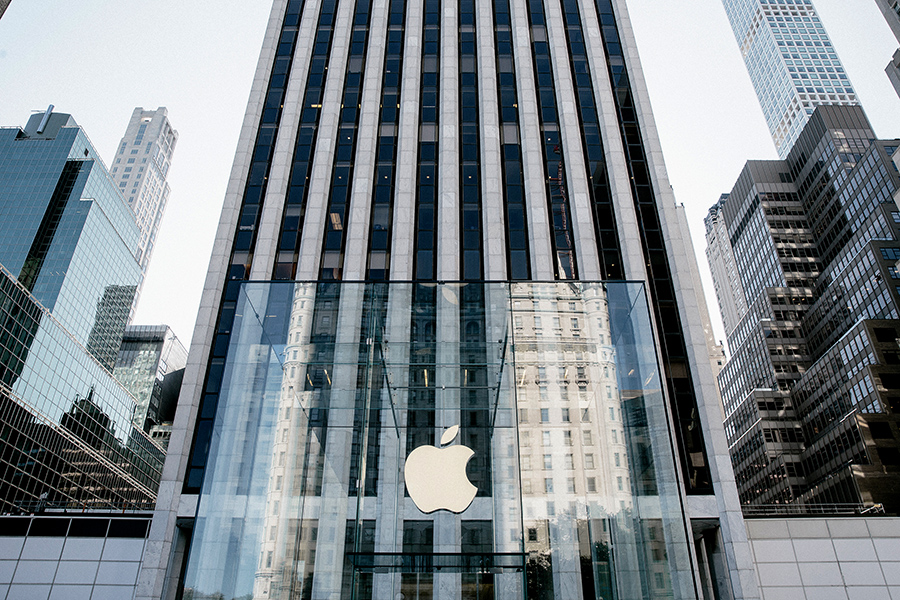 The Apple store on Fifth Avenue in New York, on Sept. 19, 2019. Apple found renewed growth with an increase in phone sales as well as younger products, like the Apple Watch, AirPods and its subscription services.
Image: Haruka Sakaguchi/The New York Times


SAN FRANCISCO — Apple’s profit grew for the first time in a year with the help of an old friend: the iPhone. Sales of Apple’s flagship product had fallen for the past year, but Tuesday, Apple said iPhone revenue was growing again. The company said customers spent heavily on its latest models, increasing iPhone sales by 7.7% to nearly $56 billion in the latest quarter from a year ago. That growth helped lift Apple’s profit by 11.4% to $22.3 billion. The numbers easily beat Wall Street expectations and were welcome news to Apple investors, who had watched the company’s typically strong growth suddenly evaporate over the past year. Before Tuesday, Apple had posted four-consecutive quarters of shrinking profit, the longest such streak since 2016. Luca Maestri, Apple’s finance chief, said in an interview that demand for Apple’s newest iPhones — the iPhone 11 series, released in September — exceeded expectations. He attributed the strong sales to new features, like a better camera and longer battery life, as well as financing options to buy a new phone and a $50 price cut for the cheapest model. Daniel Ives, a tech analyst at Wedbush Securities, said there was pent-up demand for the new iPhones because many people had waited to upgrade their older devices. “This was a jaw-dropper in terms of how strong phone sales were,” he said. “Even more than the bulls were hoping for.” Apple also was lifted by some of its newer products. Apple’s services revenue, or sales from its App Store and subscription products, rose by nearly 17% to $12.7 billion from the prior year. And sales in its so-called wearables division, which include the Apple Watch and AirPods wireless headphones, grew by 37% to just over $10 billion. The growth in services and wearables “attests to the fact that the company continues to reinvent itself,” said Daniel Flax, an analyst at investment firm Neuberger Berman. Apple also showed continued improvement in China, its second-largest market after the United States. A year ago, Apple had to preempt its earnings report with news that its sales in China would come in much lower than forecast. The news sent its stock sliding and raised fears that the slump was a precursor to global economic decline. Apple reported that its sales in the China region fell by nearly 27% that quarter, contributing to a slight decline in its overall profit. But since then, Apple’s business has rebounded, the global economy has remained largely stable, and the company’s stock has roughly doubled. On Tuesday, Apple said its sales in the China region increased for the first time in five quarters, growing 3.1%. Maestri, the Apple executive, attributed the company’s improving fortunes in China partly to the strengthening economy there. Apple’s revenue rose by almost 9% to $91.8 billion. The company forecast that its revenue would rise 9% to 15% in the current quarter. Tim Cook, Apple’s chief executive, said on a call with analysts that Apple’s forecast was less precise than typical because the company was uncertain about the effect from the rapidly spreading coronavirus. In addition to its large sales presence in China, Apple also assembles most of its products there. Cook said that some Apple suppliers would remain closed into February as a precaution from the virus and that traffic into its retail stores in the country had also fallen off. Apple shares rose about 2% in after-hours trading. Apple’s recent success on the stock market has reflected a number of good signs for its business, including easing trade tensions between China and the United States. Apple is among the companies with the most at risk in a trade war between the two countries, given its enormous manufacturing and sales presence in China. In the latest quarter, Apple debuted one of its biggest efforts to expand its services business: Apple TV Plus, a package of exclusive TV shows produced by Apple that costs $5 a month, cheaper than most offerings from rivals. Still, early market estimates suggest the service has not been a big draw for new paying subscribers over the first several months, in part because Apple is giving a free year subscription to the service to anyone who buys a new iPhone, iPad, Apple TV or Mac computer.