In recent months, major food companies like Tyson, Smithfield, Perdue, Hormel and Nestlé have rolled out their own meat alternatives, filling supermarket shelves with plant-based burgers, meatballs and chicken nuggets as their popularity grows 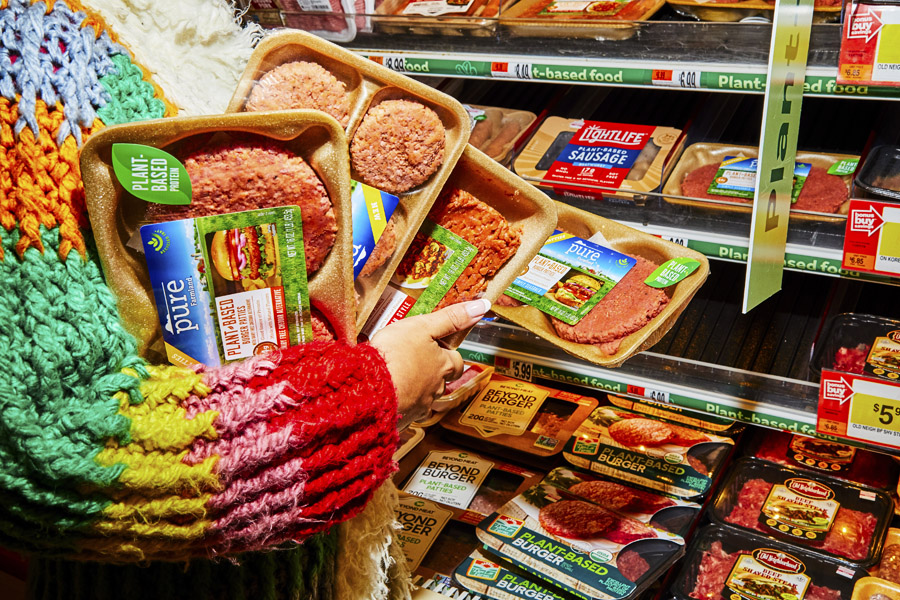 Packages of vegetarian food that looks and tastes like meat are displayed for a photograph at a Stop and Shop supermarket in Clifton, N.J., on Oct. 8, 2019. With plant-based burgers, sausages and chicken increasingly popular and available in fast-food restaurants and grocery stores across the United States, a new group of companies has started making meatless meat: the food conglomerates and meat producers that Beyond Meat and Impossible Foods originally set out to disrupt. (Amy Lombard/The New York Times)

Beyond Meat and Impossible Foods, scrappy startups that share a penchant for superlatives and a commitment to protecting the environment, have dominated the relatively new market for vegetarian food that looks and tastes like meat.

But with plant-based burgers, sausages and chicken increasingly popular and available in fast-food restaurants and grocery stores across the United States, a new group of companies has started making meatless meat: the food conglomerates and meat producers that Beyond Meat and Impossible Foods originally set out to disrupt.

In recent months, major food companies like Tyson, Smithfield, Perdue, Hormel and Nestlé have rolled out their own meat alternatives, filling supermarket shelves with plant-based burgers, meatballs and chicken nuggets.

Once largely the domain of vegans and vegetarians, plant-based meat is fast becoming a staple of more people’s diets, as consumers look to reduce their meat intake amid concerns about its health effects and contribution to climate change. Over the last five months, Beyond Meat’s stock price has soared and Impossible Foods’ deal to provide plant-based Whoppers at Burger King has prompted a wave of fast-food chains to test similar products. Analysts project that the market for plant-based protein and lab-created meat alternatives could be worth as much as $85 billion by 2030.

Now, at supermarkets across the United States, shoppers can find plant-based beef and chicken sold alongside the packaged meat products that generations of Americans have eaten.

“There is a growing demand out there,” said John Pauley, the chief commercial officer for Smithfield, one of the largest pork producers in the country. “We’d be foolish not to pay attention.”

In September, Nestlé released the Awesome Burger, its answer to the meatless patties of Beyond Meat and Impossible Foods. (“We do feel like it’s an awesome product,” a Nestlé spokeswoman said.) Smithfield started a line of soy-based burgers, meatballs and sausages, and Hormel began offering plant-based ground meat.

There are also blended options — a kind of faux fake meat that falls somewhere in the existential gray area between the Beyond Burger and a cut of beef. Tyson is introducing a part-meat, part-plant burger. And Perdue is selling blended nuggets, mixing poultry with “vegetable nutrition” in the form of cauliflower and chickpeas.

Many supporters of meatless alternatives have hailed the new products as a sign that plant-based meat has gained widespread acceptance.

“When companies like Tyson and Smithfield launch plant-based meat products, that transforms the plant-based meat sector from niche to mainstream,” said Bruce Friedrich, who runs the Good Food Institute, an organization that advocates plant-based substitutes. “They have massive distribution channels, they have enthusiastic consumer bases and they know what meat needs to do to satisfy consumers.”

But the emergence of these meat companies in the plant-based protein market has also prompted suspicion and unease among some environmental activists, who worry the companies could co-opt the movement by absorbing smaller startups, or simply use plant-based burgers to draw attention away from other environmental misdeeds.

“Making admittedly modest investments in plant-based protein is a legitimately good thing for these businesses to do,” Hurowitz said, but “it doesn’t entirely balance out all the pollution they’re causing.”

Many of the major food companies began investing in plant-based meat or other vegan alternatives years ago. But the pace has accelerated over the past few months.

“The entire end-to-end process happened in less than a year,” said Justin Whitmore, Tyson’s executive vice president for alternative protein. “We’ll move with the consumer, and we have the capacity that helps us move quickly.”

Veggie burgers have been on store shelves for decades, but companies are only now developing vegetarian products that try to match the experience of eating actual meat, using ingredients such as pea proteins and genetically engineered soy.

Pat Brown, the chief executive of Impossible Foods, has long described the project of creating faux meat as an environmental imperative. “Every aspect of the animal-based food industry is vastly more environmentally disruptive and resource-inefficient than any plant-based system,” he said. Brown has even set a deadline: eliminate animal products from the global food supply by 2035.

Not all his new rivals are quite so idealistic. Their goal is not to upend the meat industry in the name of sustainability. It is mainly to make money.

“We’re a meat company, first and foremost,” said Pauley, the Smithfield official. “We’re not going to apologize for that.”

A spokeswoman for Tyson, the largest meat producer in the United States and the creator of a new line of plant-based chicken nuggets, put it more bluntly. “Right now,” said the spokeswoman, Susan Wassel, “it’s really about the business opportunity.”

Still, Brown said he had no plans to collaborate with the major meat producers, whose marketing power and supply-chain infrastructure could help plant-based startups reach more customers. He said it was an “encouraging sign” that such companies were investing in plant-based protein, but he emphasized that the success of the movement depended on products that truly recreated the taste and texture of meat.

“If the products are not that great, if they’re just basically repurposed veggie burgers, the harm it does to us is not competition,” he said. “It’s reinforcing consumers’ belief that a plant-based product can’t deliver what a meat lover wants.”

For now, though, it’s too early to tell how consumers will respond to the wider range of options, said Alexia Howard, an analyst at Bernstein who tracks the plant-based meat industry.

“We’ll inevitably see some chipping away of market share,” Howard said. “But it’s who has the best product that will ultimately survive.”

Tweets by @forbesindia
Inside a brazen scheme to woo China: Gifts, golf and a $4,254 wine
Can IP-Led innovation help India hurdle the middle-income trap?