Over half of Indian businesses feel corruption still persists in India: EY report 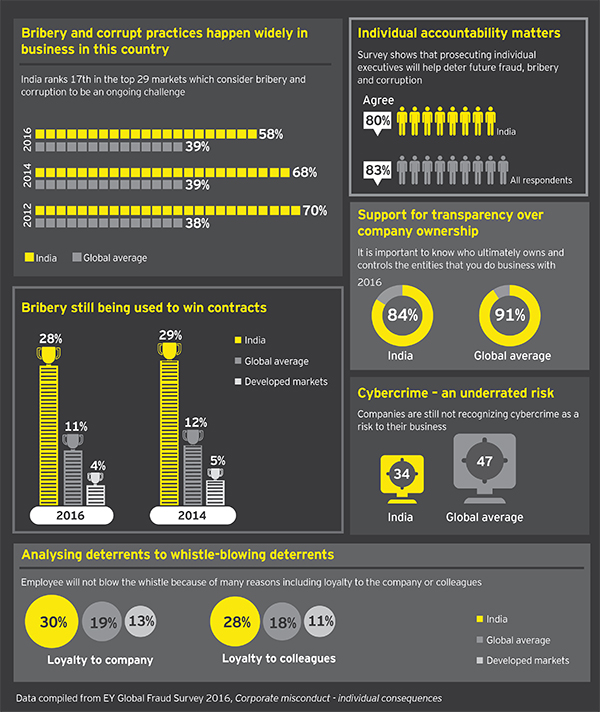 Since coming to power in May 2014, the current Indian government under the leadership of Prime Minister Narendra Modi has been trying to facilitate ease of doing business in India, in a bid to attract greater investments into the country. A key part of this agenda has been to weed out corruption across all levels of government and bureaucracy by bringing in greater transparency, often leveraging digital technology, in the administrative machinery.

Yet, EY’s Global Fraud Survey report released on Wednesday finds that 58 percent of Indian businesses surveyed believe that instances of bribery and corruption occur widely in the country still. While the proportion of respondents who still think that acts of corruption within the country are rampant, it is a significant improvement from the 2014 edition of the bi-annual survey where 67 percent of the respondents felt similarly. “This is till higher than the global average of 39 percent, which means that there is still much ground to cover,” a statement issued along with the report states.

The survey comprised in-depth interviews with senior executives in India across functions including finance, internal audit and risk, legal, compliance.

“India’s focus on maintaining its global perception as an avid business destination requires a thorough follow-through, in terms of adherence to global compliance principles,” says Arpinder Singh, partner and national leader, fraud investigation and dispute services, EY India. “While the current regime is seeding change through several macro changes in law and regulation, focus needs to be on the granular aspects to make this change a reality.”

In terms of bribery being an accepted practice of conducting business (and winning contracts), 28 percent of the respondents stated that instances of bribery occurred frequently in their area of operation. This ratio was significantly higher than the 20 percent recorded in the 2012 edition of the report, though it was marginally lower than 29 percent in 2014.